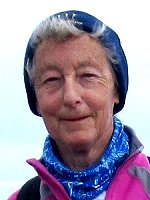 Moira’s involvement in athletics began in 1961 when she joined Gosforth Harriers moving later to Darlington Harriers and then Leeds City AC, her current club where she is an Honorary Life member. By the mid 1970s she had reached senior coach level in sprints and relays along with club coach level in hurdles, long jump and middle distance. During the 1980s she coached the British wheelchair track team including for the Seoul Paralympics. All of this whilst teaching full time! Whilst teaching children with physical disability, Moira developed the AAA Five Star Award for this group as well as organising regional events and helping organise the National Junior Championships. She still officiates at events for athletes with a disability including acting as referee for the IPC section of the London Marathon.

Her main roles now involve officiating, officials’ education and administration. She began officiating in 1970 and has moved into management roles as well, officiating at all levels from local open meetings and leagues through to the Olympics and Paralympics. As Chair of the UKA Track and Field Officials’ Education and Training sub group she is involved in the education and assessment system for officials from attendance at a Level 1 course through to Level 4 and Management level. This is also reflected in the North where she leads work on the development of officials who wish to progress to the higher levels of the system as well as offering advice to those in the early stages. In addition, Moira coordinates all the applications for Level 4 both in the North and Nationally.

Moira has fulfilled this role since the Regional Council began having been first a co-opted and then an elected Councillor. She says, “My involvement is because I see the development of athletics at grass roots level as being vital if the sport is to thrive. Officials are a very important part of the sport as they enable competition to take place. This is only a snapshot of my very enjoyable involvement in athletics for very many years and I hope that I can continue to help develop the sport so that others can also enjoy it.”

You can get in touch via yorks-and-humber-council-coaching@englandathletics.org.