With Birmingham 2022 fresh in the minds of sporting fans across the nation, what better time to speak to former GB and England athlete Paul Head.

Paul competed at four Commonwealth Games, winning a silver medal in the hammer throw in Victoria, Canada in 1994 and a bronze medal in 2002 at Manchester, England. Needless to say, Paul’s time as an athlete motivated him to become a coach:

“My coach gave his time to me for nothing and I always intended to give back to the sport one day. I first got into coaching when I was looking for a venue for my own training. I ended up going back to an old track of mine and my first ever coach George Curtis was there. I started helping him with his group either before or after I trained. As George was of a certain age, he eventually wanted to move on so asked if I would take over his group.”

Paul started off by coaching hammer, discus and javelin. He had taken the Athlete to Coach qualification but also had a wealth of experience to draw upon from his time as an international athlete. Paul was coached by Rob Bowden for 30 years and also used this knowledge when he first got into coaching:

“It can be a bit daunting to start with. I actually had an English Schools’ winner and a GB U20 representation near the start of my coaching career so that reassured me that I was doing the right sort of things.”

Getting the most out of coaching

We asked Paul what he enjoyed most about coaching.  Paul explained how he enjoys seeing changes to the athletes’ technical abilities as well as the ‘light bulb’ moments when they start to understand what you are saying and can actually feel the difference in the circle. But Paul’s favourite part of being a coach is seeing the smiles on the athletes’ faces:

“It’s a cheap way of getting confirmation that children and adults are enjoying themselves. That is key for me. I coach for the love of the event and the key to it all is enjoyment. If I’m enjoying it and the athletes are enjoying it, then that’s the main thing for me. We get a lot of work done in our group but there are a lot of smiles and a bit of banter along the way so that’s how I know it’s worth it.”

The qualities of a good coach

Paul explains how he thinks a good coach is someone who is able to adapt and really understand the different needs of athletes:

“Athletes need so much more than just pointers on their technique. Some may have financial difficulties whilst others may struggle educationally. Other athletes may have no challenges in either of these areas but need support with life skills.”

Paul went on to say that some athletes also need help to learn how to deal with a competition, not just the rules but also in terms of winning and losing and respecting competitors, officials and spectators. Paul explains how a coach can ignore all of these factors but a good coach cannot. It’s important to take the whole athlete and make sure they are as well-rounded and prepared for all walks of life as possible.

Paul spoke a little bit about the athletes he currently coaches. Having started coaching in 1999, a lot of his original athletes have now moved on. Much of Paul’s current group consists of athletes coached by his former personal coach who sadly passed away around five years ago.

“I coach from an 11-year-old girl who is as athletic and keen as anything, through to English Schools’ qualifiers, including Kai Barham who competed at the European U18 Championships in Jerusalem in July. I also coach adults including my son and my daughter. She is ranked third in the country this year. I also work with two 54 year-olds who just love to throw the hammer.”

It’s clear to see that Paul’s group is extremely diverse and that he treats every athlete as an individual, understanding their needs and goals. 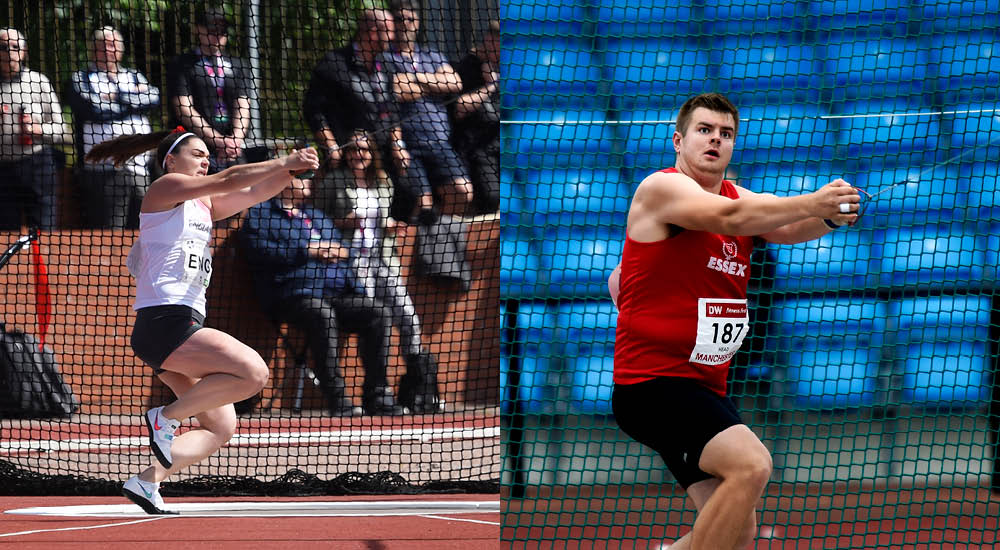 Paul’s daughter Katie and son Thomas now compete at a high level in the hammer throw.

Paul also spoke of some of some of the challenges he has faced and how he worked to overcome them:

“One of the biggest challenges I’ve had to overcome as a coach is non-selection. It’s always tough for athletes who aren’t selected, especially as they are so invested in the sport and it is such a big part of their life. Whilst it is very tough, I think the ability to bounce back is very important and shows real strength. Getting your head down, putting a plan together and being resilient is something we need in all walks of life and it makes me, as a coach, proud to see this from my athletes.”

Advice for new and upcoming coaches

When it came to giving advice to new or aspiring coaches, Paul kept it clear and simple:

“Listen to everything. Reflect on the advice. Don’t be afraid to ask questions.”

Paul explained how he is now a part of the England Athletics Youth Talent Programme and that a key part of being a coach on the Talent Pathway is actually listening and learning from others. Paul truly believes that you should always listen to other coaches and see different ways of doing things. You can then choose which learnings to apply to your own coaching.

Has Paul’s story inspired you to get involved with coaching? Perhaps you are a former athlete like Paul who would like to give back to the sport or maybe you are a parent who just wants to get involved. Whatever your reason, there is always room for enthusiastic coaches who truly understand the needs of athletes in our sport.