We run workshops for people who want to get involved in announcing or commentating to help their club, area or league competition organisers? Registration is now closed for our latest free sessions (May 2021) – hosted by one of the best in the business… international athletics commentator, Rob Walker! 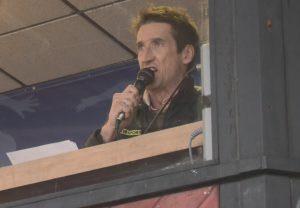 With his first Olympics commentary at Athens 2004, Rob Walker not only brings expertise but also huge fun and energy to everything he does. As well as being highly entertaining, the workshops aim to equip participants with the skills they need to support events in an announcing or commentating role as we see the return of athletics and running competition in 2021.

Ideal for individuals looking to support competitions hosted by clubs or area/league competition providers, the workshop is delivered over two 90-minute sessions, is free of charge and suitable for anyone aged 16 and above.

Later this year he will be the lead athletics commentator for the Olympic Broadcasting Service in Tokyo, when his commentary will be heard live around the world across the Caribbean, Africa, Asia and New Zealand.

Rob has worked with England Athletics for a number of years, including helping to mentor the next generation of stadium announcers and commentators. He believes the principles are the same whether it’s an England under 20 national title or the Olympic final. Whatever the level, Rob believes all athletes deserve an informed, enthusiastic and respectful voice describing their event or race, either on air or on PA.

Rob will be using the workshops to share what he knows, and what he doesn’t, in an attempt to encourage others into commentating and announcing roles – such an important element of the sport that he has loved since 1983.