As part of UK Coaching Week we spoke with two of our inspirational Run Leaders, husband and wife Mark and Deborah Hurst, from Merseyside, to find out how it all began for them, their journey through running to becoming coaches responsible for their own Run Together group, MadRunners.

Describe how you came to be involved in the sport and took up the role that you have now?

Mark: “I began running about 11 years ago as a complete beginner. I became a Run Leader in 2013 with Run England (which later became RunTogether) through the Saints Community Foundation where I was a volunteer coach. I set-up a run group with six members once a week and never thought it would, as of now, have four leaders and more than 150 members, getting together four nights a week.”

Deborah: “I began running about six years ago as a complete beginner. As my conﬁdence, ability, and speed improved I wanted to be able to pass on this experience to others. The growth of the group meant another leader was needed.”

Describe what you do in your role as a volunteer coach and Run Leader?

Mark: “All our runs and sessions are mixed ability so we can have a lot of runners at each session. I plan all the sessions for the group and liaise will all the other leaders to make sure everyone is catered for. I welcome new runners, support new and existing group participants through sessions and assist with any technical drills and adjustments they need to help them run.”

Deborah: “I do all the administration for the group and, like Mark, welcome new runners, support new and existing group participants through sessions, and of course run together with them. I’m also an active Mental Health Champion for our group.”

Describe what you gain from the role?

Mark: “Since becoming a Run Leader and now a coach, I’ve grown in conﬁdence knowing that I can help our running club members further with their running journeys. I’ve made so many friends for life through our running group.”

Deborah: “Being a Run Leader is very rewarding and it’s great to pass on my own experience to runners, both male and female, old and young, beginners or experienced. Like Mark, I’ve made so many friends for life through the running group.”

Describe what you enjoy / like most about your role?

Mark: “I really enjoy leading and coaching. It’s become a big part of my, and my family’s, life. It’s great to meet people who want to run just for fun and people who do it to improve their health. It’s interesting because not every runner is the same.”

Deborah: “I’m always very excited to help a new runner start their journey as I remember my own experience. It’s great to watch someone new feeling nervous about getting the running bug and it then becoming part of their lifestyle.”

Describe what kind of challenges you face in the role? 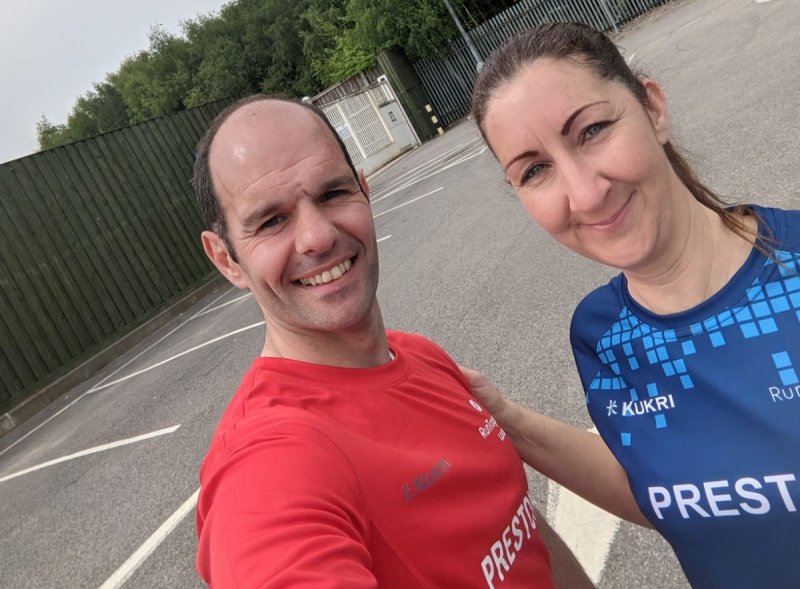 Mark: “We run in rain or shine and when training in public there can sometimes be a reason we need to change something at the last minute which can be a challenge. We try to pick unusual places to run where we can, so no run session is the same. As a coach it’s challenging when I meet a runner who has returned from injury or is looking to improve their running form or has a goal they want to achieve.”

Deborah: “Sometimes the weather can mean we have to completely change our route or drills. Our training prepared us for this though and we also have experience and the support of our group runners and leaders. We have various abilities and sometimes hidden disabilities with our members so are always happy to adapt to suit their needs.”

Describe any new skills you have developed in your role?

Mark: “I have developed my group skills and conﬁdence in leading. Being able to communicate with runners from diﬀerent backgrounds and abilities has been a valuable skill I have developed.”

Deborah: “I’ve deﬁnitely gained conﬁdence in both my own running and leading. It’s fantastic to be a Mental Health Champion which has helped with my own mental health as well as our runners. In a big mixed group, organisational skills are a must.”

Describe a particular example which best captures the diﬀerence you have made in the role?

Mark: “I have been able to setup up a running club that oﬀers a wide range of sessions to all abilities from junior runners, teen runners, family running and adult sessions. It’s become a key part of our community and really plays a part in bringing people together and making life-changing experiences.”

Deborah: “I hope I give out the message that anyone can run, they just have to want to. Having completed several half marathons since qualifying as a leader, I hope shows our runners that regardless of age, ability and experience you can achieve whatever you put your mind to.”

Summarise in just a few sentences your experience in the role?

Mark: “There’s no such thing as a bad run. We learn something from every step. The ﬁrst mile is a liar. Keep going, keep putting one foot in front of the other and enjoy the distance.”

Deborah: “Anyone can run, you just have to want to. There’s no such thing as a bad run, they are all experience. Being a runner has no limitations. MadRunners have runners with a wide range of age, speed and experience but we’re all runners and we all love to RunTogether.’

What has it been like for you during the pandemic?

Mark: “Being a MadRunner coach during lockdown has been the most challenging of all but the most rewarding. When the lockdown announcement was made in March 2020, and we knew we had hosted our last session for a while and stopping was not an option, we immediately set up an online hub where we supported each other through the pandemic. We did virtual challenges, team relays, for our adult and young runners. It was an extra challenge for me to coach sessions online via zoom rather than face-to-face to keep our members active. This was really out of my comfort zone, and I found it really hard to begin with, but we needed to keep going.”

What impact has being a Run Leader had?

Deborah: “Being a Run Leader alongside my husband who is the Running Coach of MadRunners is great. Being a runner, leader or coach makes you part of a team as does being married. Our Run Together group has lots of runners so although we arrive and leave together our roles within each run session vary. Our children are also developing a love of running. Mia is a Mini MadRunner, and Amy is a Teen MadRunner so running really is a big part of our life.

UK Coaching Week 2021 is taking place between 7-13 June. It is an opportunity to celebrate the nation’s coaches and offer a big thank you for everything they offer our sport.

We recently launched our new 12-year strategy for athletics and running – ‘Athletes and runners at the heart’ – in which we described the importance of us delivering the RunTogether running participation programme to assist with growth of participation, coaching and leading.