Llanberis was the venue for another fantastic days racing to the top of Snowdon and back, the race is 10 miles long, 5miles up and 5 miles back down the same route. This year’s race was part of the World Mountain Running Association (WMRA) World Cup Series, leading to a very competitive start list. Both World Cup Series leaders were racing; Andy Douglas (Scotland) and Sarah McCormack (Rep of Ireland).

The England Team was selected in June from the Settle Hills race and we had two very strong teams, even though only one of our runners had raced at Snowdon before. Conditions in the lead up to the race were wet and windy but by the start time of 2pm the rain had stopped. When the gun went off for a very fast start, the leading runners were Andy Douglas (Scotland) and the Italian twins Martin and Bernard Dematteis. As the race hit the very step road sections and moved onto the open mountain trails, Andy Douglas had already opened a lead of some 100m over Zak Hanna (Rep of Ireland) and Dan Haworth (England) the rest of the England team, Michael Cayton, Billy Cartwright and Joe Baxter were just behind in the main pack. In the women’s race Sarah McCormack was leading the way with Hatti Archer (England) in 2nd place, followed by Katie Walshaw, Kelli Roberts and Jemima Elgood of the England team all in strong positions.

At the top the weather conditions were misty with poor visibility but this didn’t stop Andy Douglas stretching his lead to 1min 32sec over Martin Dematteis and Zak Hanna. In the team competition England were in a great position with all four runners in the top 12. In the Women’s race Sarah McCormack also had a great lead over the top followed by the Elisa Sortini (Italy) Hatti Archer (England) and Emma Gould (Mercia) in 4th, in the team race England were just ahead of Scotland.

A lot can change on the descent of this race as it’s so rough underfoot – and athletes have different strengths. Though one thing that didn’t change was the commanding lead Andy Douglas had over the rest of the field; he’d extended it to over 2 minutes to win by the biggest margin for some years and the fastest time since 1995. Martin Dematteis finished 2nd with a strong descent and his brother Bernard caught Ireland’s Zak Hanna to finish 3rd with Zak holding onto 4th. In the team race Scotland won comfortably with some fantastic descending especially Euan Brown moving up to 7th position after going over the top in 14th. England packed well with Michael Cayton having a great descent to finish 6th, Joe Baxter and Billy Cartwright ran closely for most of the race and finished 8th and 9th but having 3 runners in the top 10 was only good enough for 2nd team, Dan Haworth dropped a few places on the descent to finish 13th.

In the women’s race Sarah McCormack was caught on the lower trails by the fast descending Italian Elisa Sortini, but in the end Sarah moved away again on the roads to win in the second fastest ever time. Hatti Archer finished in 3rd place in 1hr 17m 17s, a time that would have won every race since 2009. Emma Gould (Mercia) was 4th, next came Kelli Roberts in 5th who also had a fantastic descent, with Katie Walshaw in 9th which gave England the team title back from last year’s winners Scotland. Jemima Elgood also had a great descent and considering Jemima is a first year senior athlete she had a brilliant race to finish 11th. 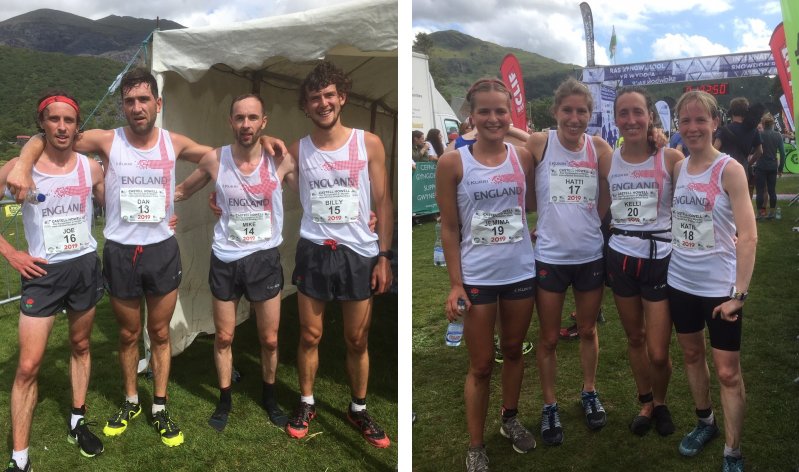