We always love to hear stories from our athletics family, to shout about and share your successes and triumphs, to inspire others to get into and enjoy our sport. Here Dave shares his story, how he got into running in somewhat of an accidental manner. A visually impaired athlete motivated to get moving to set a better example and be an inspiration to his son. Who found a guide to run with and has most certainly caught the running bug. Read on to find out more of his story, which may just spark New Year marathon ambitions in you…

Dave Williams was born with Leber Congenital Amaurosis, which causes sight loss at birth. Never the most active of people, Dave initially took up cycling to set a better example for his 10 year old son, Arlo, and to balance out some of his unhealthy life choices (namely a love of pork scratchings) and a job that meant sitting at a desk all day.

‘Unfortunately the cycling didn’t pan out as I had hoped, I found it more and more difficult to find a pilot for tandem cycling and wasn’t getting out on my bike much. It was at this point that I stumbled across the Find A Guide database, a national guide runner database by England Athletics in partnership with British Blind Sport, which visually impaired runners can enter their postcode and find guide runners in their local area.

‘Initially my interest in this site wasn’t anything to do with running… I thought that 1) maybe I could lure a guide runner into converting to a pilot cyclist, and 2) as a freelance IT consultant maybe I could find a problem with the site and get some work out of it! Alas, neither objective became a reality and instead I ended up connecting with Steve, a guide runner who lived 3 miles away.

‘Ever the cynic, I didn’t believe Steve was real – a guide runner 3 miles away in the rural countryside of Worcestershire was too convenient and good to be true. After many messages back and to, we organised our first run. The allotted day and time for the run arrived… and there he was on my doorstep – Steve was real and ready to run.

‘I put on my trainers and off we went. Having always preferred being independent, walking without the use of a cane or a guide, to walking holding Steve’s elbow was the first step out of my comfort zone. The second step was the running… we began with a steady walk, and then 100m in Steve said, ‘are you ready?’, and we ran. 200m or so later and we were walking again, and I was gasping for breath. But we carried on, switching between walking and running. Run done, I apologised to Steve for wasting his time, it not being much of a consistent or distant run. To which Steve replied, ‘see you next Friday!’

At the end of August, Dave managed to run continuously for 1 mile for the very first time – a momentous and hugely motivational moment.

‘I thought if I can run 1 mile, then I could probably run 2, and then 3, and then who knows how many more… it was in this moment that I knew I needed (and wanted) to be running more than once a week. I got in touch with Black Pear Joggers, which is where I met a guide runner called Bex. Bex is a guide runner who has dyspraxia, and initially I thought our pairing would never work – how wrong I was. We gelled immediately, and throughout 2019 we ran over 1000 miles together, which included a marathon!

‘A few months after our meeting, I accidentally entered the ballot for the 2019 New York City Marathon, and to my shock (and initial horror), I got in! Bex agreed to do it with me, and so with 9 months to go training commenced.

‘Time flew and before we knew it we were in New York, marathon day was upon us, we were up at 4am to get to the start of the race out in Staten Island. The New York Marathon is known worldwide to be one of the more challenging marathons, with over 900ft of elevation and 5 bridges. The road was covered in debris and potholes and people were constantly crossing over the course, making navigation tricky for Bex, who had to focus on keeping herself going as well as me. The marathon was almost exactly a year on from my first parkrun, and for the first 16 miles I felt like I was floating, but by mile 23 I started to feel like I was running through plasticine (in actual fact I was quite grateful for the struggle because I felt it had all been too easy up until then). 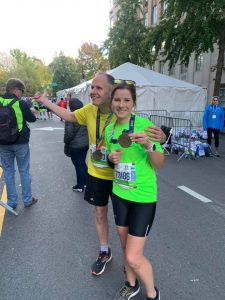 ‘We did it – we completed the New York Marathon in 4 hours, 12 minutes and 20 seconds; an incredible achievement!

‘We now have London 2020 in our sights, and a sub 4-hour time to hit – which we will. Friends have also suggested that once London is complete, we’ll have conquered 2 out of the 6 major marathons, so we may as well strive to run the other 4! And seen as I/we have well and truly caught the bug and can’t turn down a challenge, I’ve put in for the ballots for Chicago and Berlin, and will aim for Boston and Tokyo too, all with Bex by my side.’

Dave never believed that his story could have unfolded like this, that day he first stumbled upon the Find A Guide database would lead to running marathons. If Dave’s story has sparked your interest in taking up running, whether it be for a mile or a marathon, and you’d like to find a guide to run with, you can find out more and access our guide runner database here: findaguide.co.uk