Sun-sensational! Day 2 report for U23 and U20 champs

Ignoring government advice to slow down and take it easy for a few days because of the searing heat, England’s new crop of international athletes enjoyed a superb day of world class performances in what can only be described as testing conditions.

Fast running on weekends like this – 30 degrees, not much wind – is always order of the day so rightly there was plenty of anticipation for the final of the U20 men’s 400 hurdles given Onyekachukwu Okoh (Chelmsford, Jade Harding) had looked so good in qualifying. In fact, in the heats he flew to a UK U17 record and a World Junior Qualifying time of 51.29 (51.30 required), understandably celebrating in some style afterwards. A controlled 51.57 in the final secured him the gold medal and a seat on the plane to Cali in Colombia; cue more flag waving. “I made a couple of mistakes on the back straight,” he said, “but I knew I had it under control coming into the home straight and even gave it a little look over my shoulder,” he laughed. “That race was fun.” Yes it was, the crowd loved it!

Given by the huge cheers, they also loved the 200 metre finals, not least because in the U20 women’s 200 Success Eduan (Sale Harriers Manchester, Anita Richardson) looked so smooth and powerful in qualifying. The Sale athlete, with a best of 23.30 this year, turned a solid bend, into a sensational final 40 metres to win in 23.62, sealing her ticket to the World Juniors. Georgina Adam (Loughborough, Benke Blmqvist) ran a PB to win the U23 women’s 200 in 23.40.  The U20 men’s 200 featured Jeriel Quainoo (Blackheath and Bromley, Ryan Freckleton) who powered to 10.27w to win the men’s 100 on Saturday, so it was no surprise to see him fly around the bend with a commanding lead to win in some style in 20.85, waving to the crowd fully 10 metres from the line.

The U20 women’s 400 was all about Yemi Mary John (Woodford Green and Essex Ladies, Alan James) confirming her No.1 status in 2022. The quickest in the field with 52.98 this season, she did precisely that with a 53.19 clocking to confirm her ticket to Cali. Super consistent at low 53 seconds – this was her sixth best time – it’s now about moving on a notch.

Marli Jessop’s (Shaftesbury Barnet, Scott Grace) career has been all about just that with great progression throughout her career and now the World Junior Qualified athlete will add a national title to her collection thanks to a controlled 13.58 win in the U20 women’s 100H. And to round an exciting series of hurdles off, in the U20 men’s 110H Daniel Goriola (Bexley, John Gates) used his superb dip to win in 13.76 to go one better than his silver indoors earlier this year.

In the women’s U23 hammer, defending champion Charlotte Payne (Reading, Paul Dickenson) effectively ended the competition with the third throw of the day with her opening 60.53. She’s clearly a thrower in form and stretched that lead with an encouraging 62.26 in the third round before signing off with 62.42. “Of course, I’m pleased with the win,” said Charlotte, sporting a pair of lucky Bart Simpson socks, “but there is much more to come,” she continued, her eyes on the bigger prize of making the senior team for the European champs. That team place, confirmed, selectors will be tight but she is definitely in the running to make that Championship via the ranking system so it looks like those lucky socks could be working!

In the U20 women’s high jump Gabrielle Garber (Leeds City, Jessica Taylor-Jemmett) also looked like there’s more to come despite the fact she’d just added 5cm to her PB to win gold with a first-time clearance at 1.78 to go equal top of this year’s UK rankings. The U20 men’s high jump was equally exciting as Luke Ball (Yate, Jeremy Dale) cleared 2.10 at the first time of asking before raising the bar to a World Junior Qualifying mark of 2.16, 4cm higher than his PB. The English Schools’ AA champion was frustratingly close on his first and third attempt but had to call it a day at that height, although judging by this form there’s more to come. 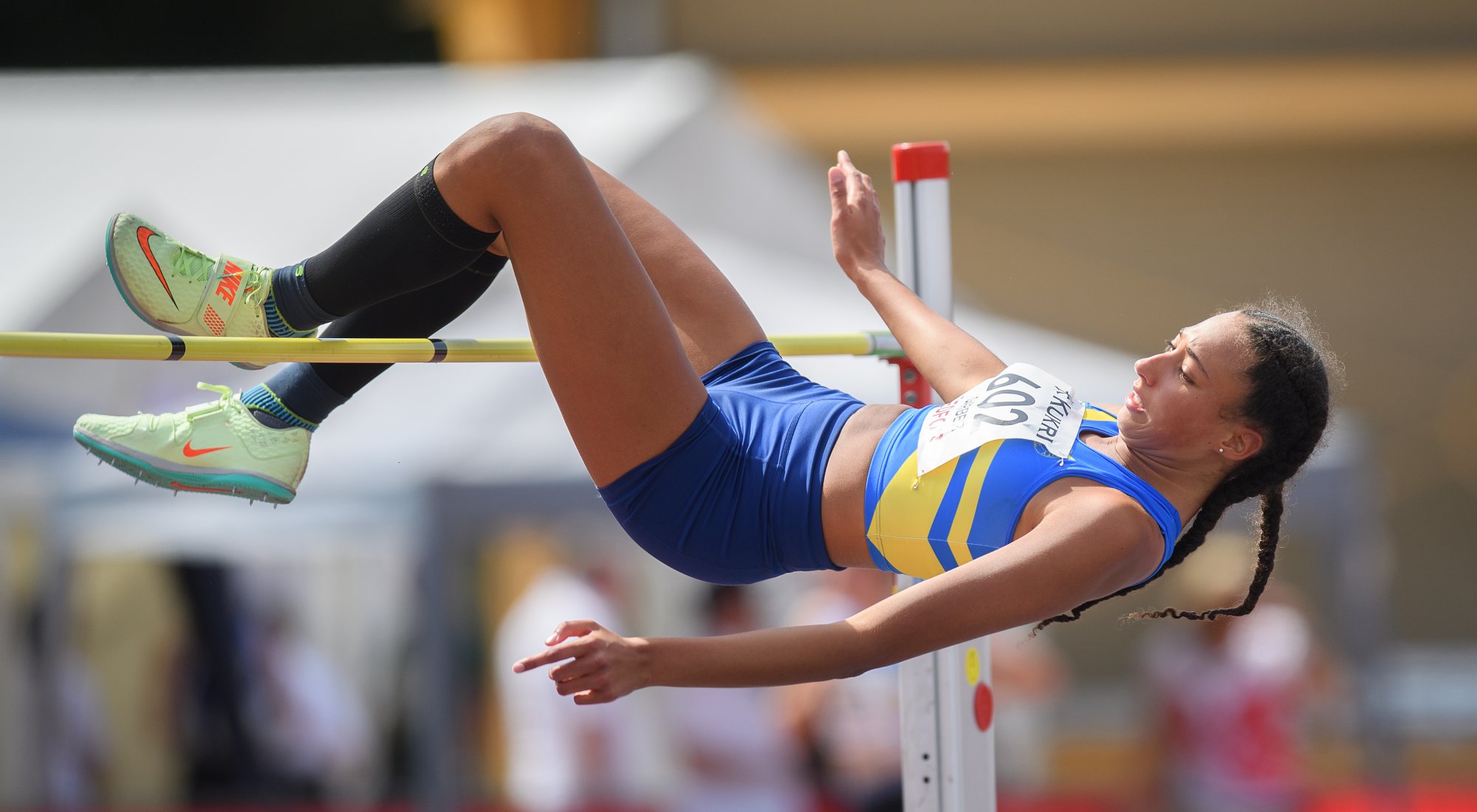 Appropriately enough given it ended the day in the jumps, the men’s U20 long jump was all about the final round as Brad Davies-Pughe (Shaftesbury Barnet Harriers, Jake Awe) won with his last jump of 7.35 to pass late leader Archie Yeo (Kingston upon Hull, Stephen Wymark) who touched down at 7.28 with his fifth (to take that lead) and sixth round efforts.

Conditions were perfect for some really fast 800m running and so it proved; first up was the U20 women’s 800m, the field through the bell in 62.42 thanks to Abigail Ives (Basildon, Luke Gunn). Already qualified for Colombia thanks to her early season 2:01.88, she hit the accelerator hard in the final 150m to take gold in 2:04.00, just 0.27sec outside of the CBP. The U20 men’s final included Sam Reardon (Blackheath and Bromley, Nigel Stickings) – like Ives, an athlete qualified for the World Juniors. Unlike the women’s race, this was a more cautious affair (56.5 at the bell) but no-one could live with Reardon’s second lap of 53.5 (he’s a 46.69 400m runner) as he confirmed his place on the team for Colombia with 1:50.20. The final race, the U23 men’s 800m was all about hanging on as Australian Jack Lunn (a 1:46.71 performer) flew through 400m in 52.7 and at no point looked like he’d lose as he crossed the line first in 1:48.61. Behind him, Henry Fisher (Blackheath and Bromley, Dean Miller) benefited from the high-quality pace making to get himself the gold medal in 1:50.08 thanks to a great last 100 metres that saw him claw by fast improving Charlie Crick (Tonbridge, Max Coleby), 1:50.12.

Before the day’s searing heat could really take its toll on the distance runners, George Beardmore (Worcester, David Walker) took the English title with a solid 14:40.27, although credit to the guesting Isaac Heyne, the second fastest junior ever from Australia with 13:30.82 who accelerated away from the field to cross the line first in 14:25.34, probably worth closer to just inside 14-flat in better conditions – such was the temperature on the track even in the morning. 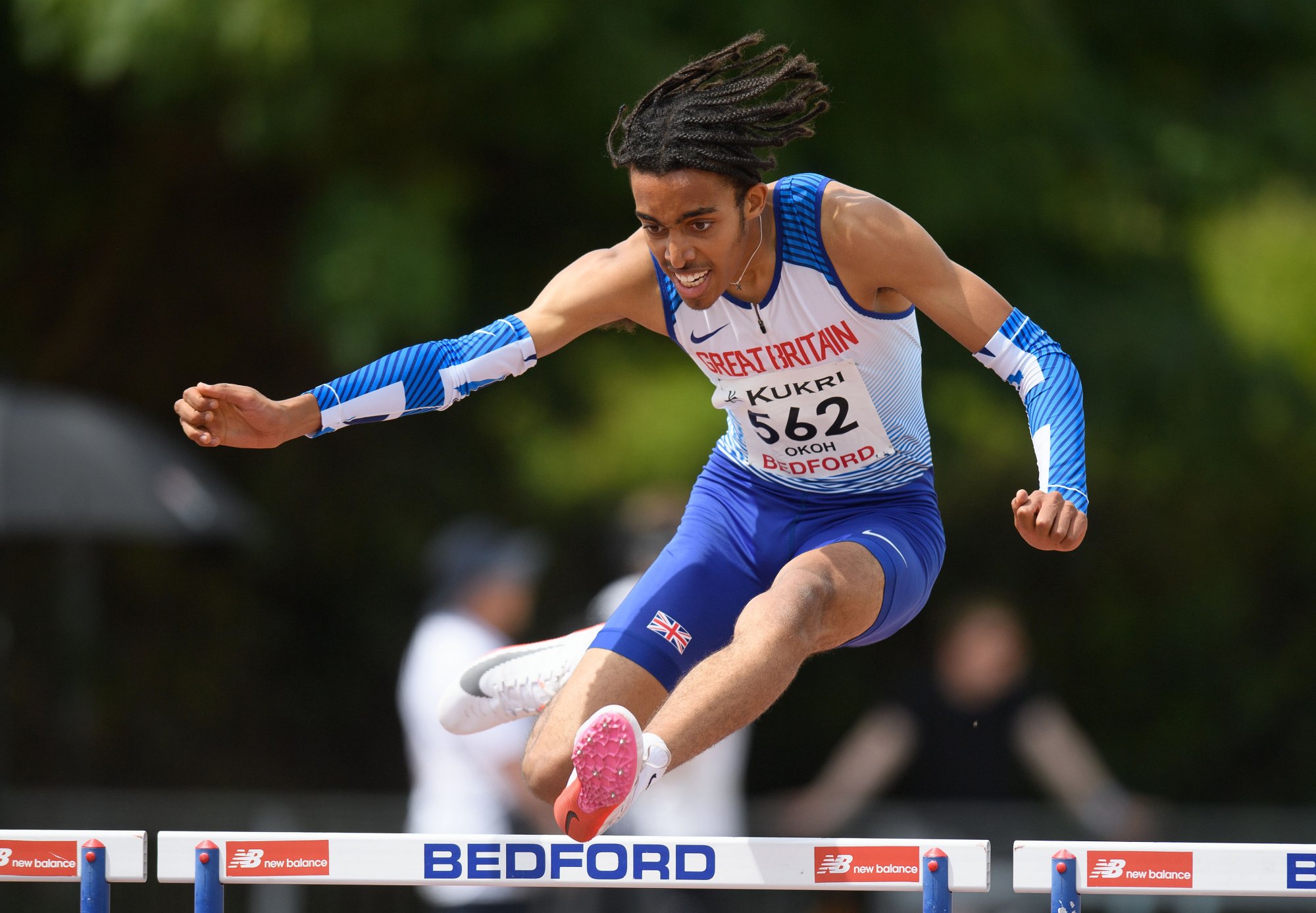 Similarly, on a weekend that saw the 3000m steeplechase British record improved in Eugene at the World Champs, it was great to see Kia Dee (Cheltenham) win the U20 women’s 3000m steeplechase in a PB of 10:45.29 a stride or two behind the U23 gold medallist Elena Carey (Bracknell, Mick Woods) who clocked 10:43.10. This meeting is all about the next generation establishing themselves at a national level, so the strength in depth is extremely encouraging given the tough conditions for athletes running in the longer events.

The U20 women’s 1500m field can be forgiven for opting for a tactical race as the heat was pretty oppressive when they towed the line. A gentle 2:33 opening 800m did nothing to split them and it was left to Jessica Spilsbury (Trafford) to power away in the final straight to win in 4:30.88 to add to her 3000m bronze from the UK Athletics Champs last month.

*A huge thank you to officials, volunteers and staff who worked tirelessly in the testing, hot conditions.