England Athletics U20 and U23 Championships incorporating World Junior Trials, Bedford, day one.

It was the 100-metre sprinters who provided the headline writers with all the heat wave-related inspiration they needed as a string of sizzling qualifying rounds culminated in a red-hot series of finals – hugely appropriate on what was one of the hottest days of the year.

First up and bringing it nicely to a boiling point was the recently crowned European U18 champion Nia Wedderburn-Goodison (Harrow, Andre Williams) in the U20 women’s 100m who scorched to 11.50 thanks to her surge in the final 20 metres. Forget the weather comparisons, this was truly a hotly contested race with almost nothing separating the first two, Joy Eze (Gateshead) taking second in 11.56.

“I wasn’t actually sure I’d won,” said Wedderburn-Goodison, happy to hear it confirmed on the PA system. “I love running in the hot weather so today was really great.”

Next up was the U23 women’s 100m and Eve Wright (Shaftesbury Barnet, Ryan Freckleton) kept things simmering along thanks to her 11.56 victory. But that was just the start. The men’s U20 100m saw the temperature turn up a notch as Jeriel Quainoo (Blackheath and Bromley, Ryan Freckleton) dipped to 10.27w* to win a very close race from Michael Onilogbo (Newham and Essex Beagles, Carl Graham) who clocked 10.34w.  And finally to end a fabulous first day Alwayne Campbell (Birchfield, Andy Paul) powered to a massive lifetime best of 10.35 to take the gold medal by just three thousandths of a second; that’s 0.003!

A sensible timetable change moved the distance races from late in the afternoon to first thing in the morning and it proved hugely successful resulting in a string of tremendous times and performances. Ed Bird (Poole AC, Mark Pauley), bronze medallist at the recent European U18 Champs 3000 in Jerusalem took the lead early on in the U20 men’s 3000 and despite a few lead changes was always in position to strike when the moment was right. That proved to be with 600m to run as he surged away to clock a superb – for any conditions let alone the heat – 8:17.69. But it was close. Yes, Bird did look in control for the whole race, but a fabulous finish from Bradley Giblin (Trafford) took him from a distant to third to just 0.04 behind Bird on the line. Close!

The women’s U20 3000m was more about running the legs off the opposition, which was precisely Kaitlyn Sheppard (Cheltenham and County, Andrew Beadle) did as she surged away after a couple of laps to solo a highly impressive 9:38.09 PB.

Tom Bridger (Cambridge and Coleridge, Mark Vile) rounded off a great morning using the same tactics in the U20 men’s 3000SC – hit the front early on and run the legs off the competition. Comfortably under 9min this year the result was never in doubt as early as the second lap and he ran a solid 9:02.27.

“My plan was to hit the front, so I had a clear view of the barriers,” he said. “I’m really pleased with how it went and now I’m looking forward to Colombia (he already has the qualifying time). But let me tell you, it was hot today!” 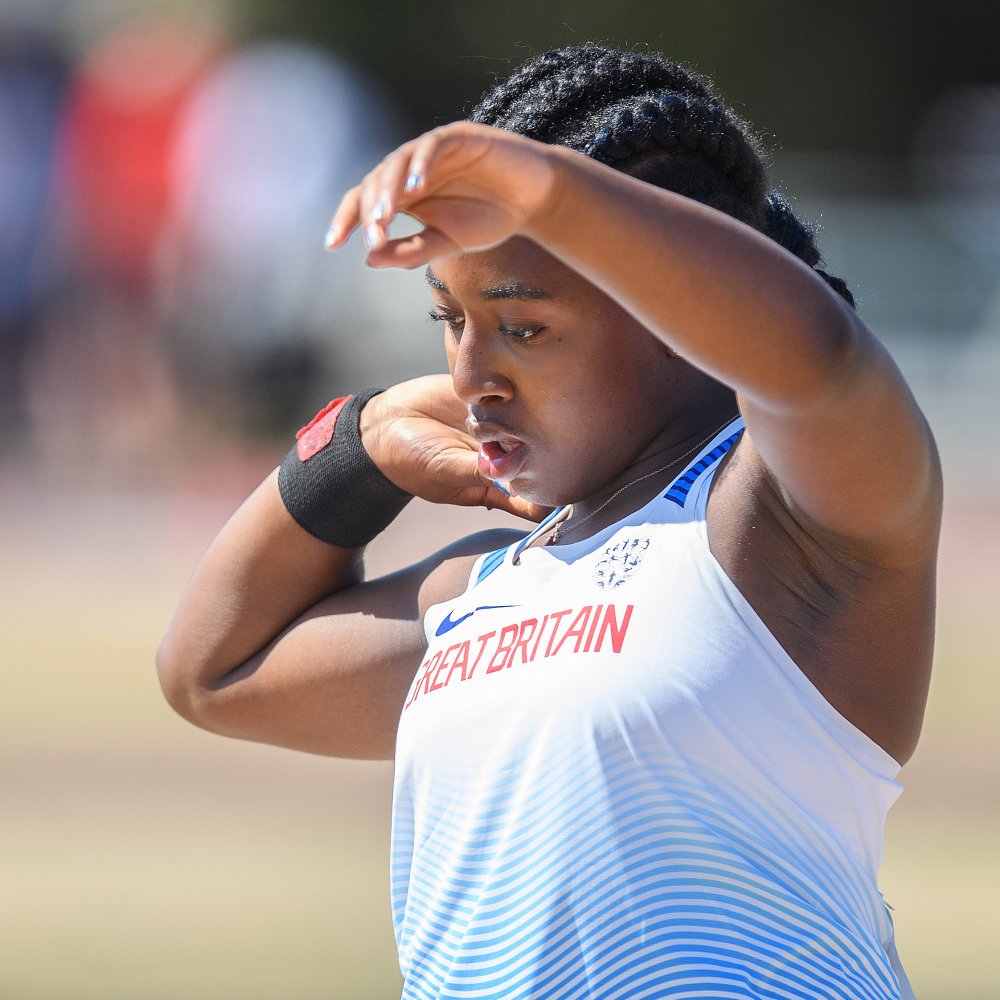 In the field, all eyes were on the U20 women’s shot and Cleo Agyepong (Blackheath and Bromley, John Hillier). Agyepong is the first Briton at any age group to win a gold at European level – ever, thanks to her gold in the European U18s in Jerusalem. There she threw 17.39 with the 3kg ball, while in Bedford she hit 14.82 with the 4kg implement to take the gold.

“I’m really pleased with how the season is going,” she said, adding that she’s been treating everything with “intent” this season. “I’ve been making a conscious effort to work on what my coach tells me and adjust accordingly,” she explained. It’s clearly working.

Zac Davies (Harrow, Stuart Carlaw) won the U20 men’s shot with a PB of 17.63. The men’s U20 hammer was all about the 70-metre line, the qualifying distance for Colombia for each event. Owen Merrett (Yate, Matt Spicer) has been peppering it all season, a long throw in excess of that elusive distance finishing just outside the sector last week at the English Schools’ champs. Surely, speculated a team selector, it’s just a matter of time, although in Bedford it was the same story as his second-round effort of 69.93 fell frustratingly short again. But it was a PB and, of course, a national title.

In the javelin, a mark beyond 69m was needed to gain a qualifying standard; Michael Allison (Windsor ,Slough, Eton and Hounslow AC, Tom Dobbing) achieved 67.16 on his final throw – although he had thrown 69.70 last month.

Jessica Bennett (Southampton, Dave Callaway) also sealed the deal with her second-round effort of 53.39 in the U20 women’s hammer. She entered the competition as favourite and lived up to that pressure, although after three fouls, Lara Moffat (Marshall Milton Keynes, Jack Kee) did find some form as she threw 49.93 in the fifth round. 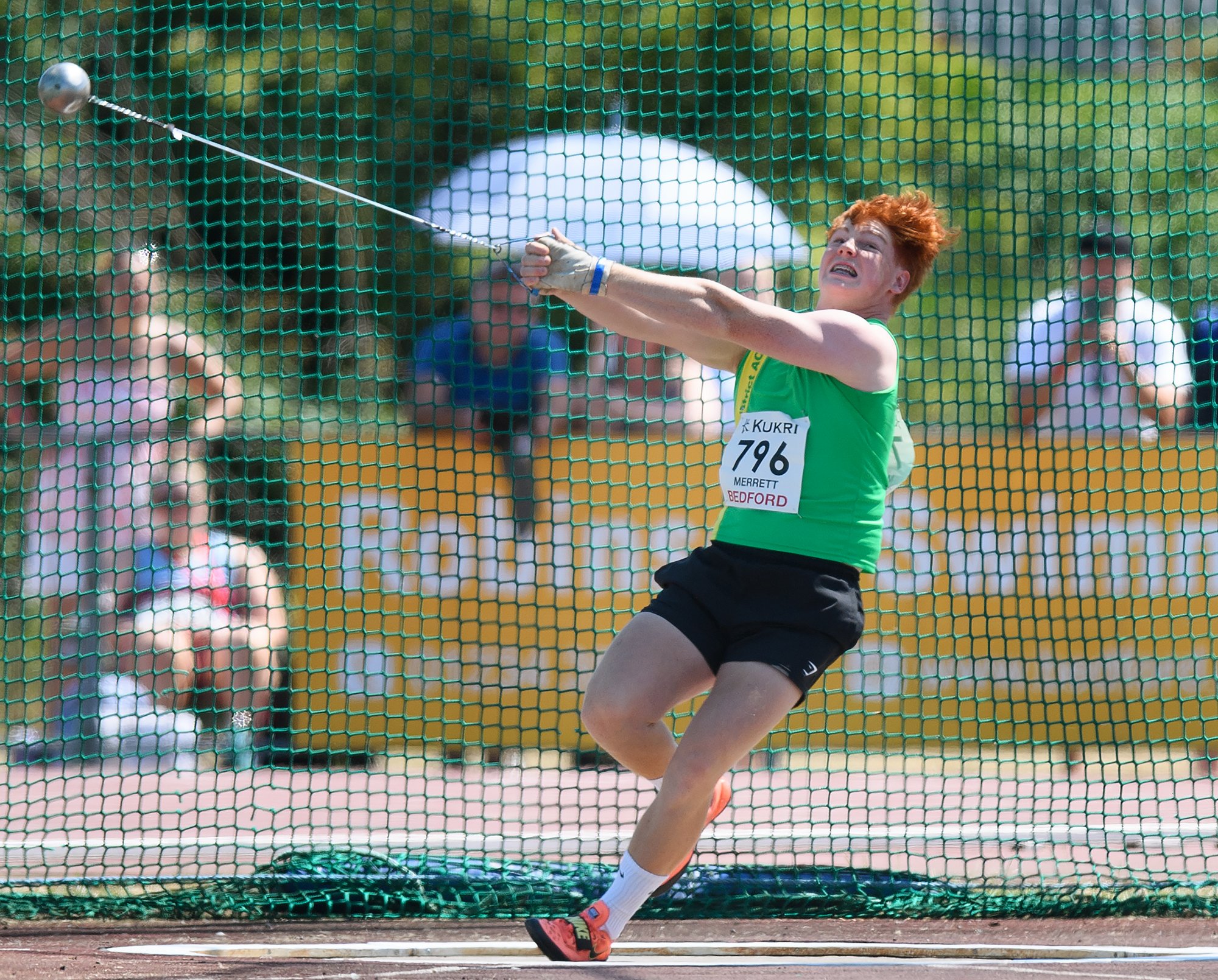 This championship is all about getting it right on the day, something Toby Dronfield (Blackheath and Bromley, John Shepherd) definitely did as he jumped 15.21w in the fourth round of the U20 men’s triple jump. Of course, that ‘w’ negates the fact it was a PB, but on this occasion he can rightly claim he was a little unlucky in that department as rarely for this arena and for much of the of the day the wind barely registered a reading at all on the measuring gauge. Nonetheless, it was also a great win as UK number 1 this season and indoor champion Archie Yeo (Kingston upon Hull, Stephen Wymark) had to settle for a last round effort of 15.15.

Ever-consistent Holly Mills (Andover/Harrow, Laura Turner-Alleyne) won the women’s U23 long jump thanks to a solid series that included a third-round effort of 6.37, which matched her longest jump of year which she did in Estonia.

Success from Down Under

Over the years, this championship has played host to various national teams on tour, and this time it was the Australians who took advantage of that invite. For instance, Jaylah Hancock-Cameron from the southern hemisphere and a 4:11 performer over 1500 took the gold in the U23 women’s race in 4:16.37 easing away from Alexandra Millard (Invicta East Kent, Bill Foster) in the final 150 in what was a really exciting race that saw Millard do everything she could to shake off her Australian rival. Millard ended up with 4:18.36. Australian Matt Hussey also won the U20 men’s 1500 in 3:51.19 in similar fashion, his final 300 proving too much for his rivals.

And finally, Welshman Aled Davies (Cardiff, Ryan Spencer-Jones), guesting in the England Champs will rightly argue that he produced the performance of the day as he hit 56.21 in the U23 men’s discus – a world record for his F42 category, better than his pending 54.56 in Cardiff earlier in the week. Next up for him is the Commonwealth Games and a great shot at gold.

And of course, thanks to the superb officials and volunteers who worked tirelessly in what were very tricky and unusual conditions for Britain – very hot under an intense sun.