Athletics is all about progress and there was plenty of that on display in Bedford on day two of the England U20 and U23 Championships as top ranked marks were very much order of the day. Perhaps more than in any other year, ‘being rusty’ could have been used as an excuse given the restrictions we’ve all endured, but it’s plain to see with these age groups in particular, nothing but being a well-oiled machine would suffice when national titles are up for grabs. 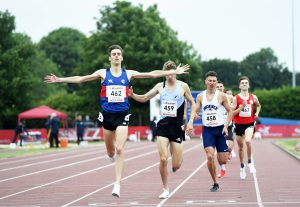 through the gears in the final 100 metres to take the gold medal in the U23 men’s 1500m. His final time of 3:40.53 – which included a 1:54 last 800 – was all about staying cool and calm in that closing straight in a field stacked with sub 3:40 runners. He’s improved from 3:45 to 3:39 this season and on this form, has more to offer. “I timed it to perfection,” said Tiarnan. “I came here to try and get a medal, so I’m obviously more than happy to come away with gold. Now it’s all about concentrating on getting ready for the Europeans.”

Daniel Joyce (Tynedale Harriers, Peter Venus) also demonstrated perfect timing to win the U20 men’s 800m in 1:52.43 with a copycat last straight surge, cutting his way through a line of fellow sub 1:50 runners. “I knew if it was slow that would help me,” Danny said. “Now I need to find a few races to try and get that 1:49.0 qualifying time. But I’m really pleased as I only got through to the final as a fastest loser. Now it’s all about trying to move on.”

Similarly, it’s all about progression for Sarah Tait (Lasswade, Linda Smith). She boldly hit the front early on the U23 women’s steeplechase determined to run a European qualifying time of 10:00.00. The Scot had a PB 17sec slower than that, but not anymore, although she couldn’t decide whether to be pleased or not when she crossed the line as she was frustratingly just shy of the time needed, clocking 10:00.49. “Bittersweet,” she said describing her emotions. “I’ve improved by 68 seconds this year, but just need that tiny bit more.”

Brad Davies-Pughe (Shaftesbury Barnet Harriers, Jake Awe) did exactly that and found that something extra in the men’s U20 long jump, winning with a legal 7.56 (+1.4). Entering the competition with 7.49, he needed just one more centimetre to get the Euro qualifying mark so was more than happy with his seven-centimetre improvement! “I’m very excited to get that European standard,” he confirmed. “Now I can move on towards it.”

Despite not having run any 200s this year, or even doing any training for the longer sprint, Kristal Awuah (Herne Hill Harriers, Matthew Thomas) added the U23 gold to the 100m title she won yesterday, looking powerful with 23.24. “I’m really surprised,” she laughed. “I’ve been concentrating on the 100 so didn’t really expect this especially as it was into a headwind.” And, she added, not quite as warm as the Dallas and Houston, Texas base she has been using in the USA.

Also making light of the less than perfect sprinting conditions was Shemar Boldizsar (Harlow, Stephen Lott) who ran a sparkling 20.81 in the U23 men’s 200m race for a great return to form, although frustratingly for him it was just 0.01sec shy of the Euro qualifying mark. For Success Eduan (Sale Harriers, Anita Richardson) however it was a very different story as the UK No.1 U17 athlete powered to a lifetime best of 23.70 to take the gold in the U20 race, and secure that much sought-after Euro qualifying time.

The cooler conditions were good though for some athletes, particularly in the distance events. The 10k walk saw a string of late disqualifications but it was Chris Snook (AFD, Verity Snook), tipped as the pre-event favourite in the U23 men’s race by England coach Andi Drake, who kept calm as he cruised to an easy win in 44:45.98, adding the title to the U20 gold he won a couple of years ago. “It was up and down out there,” he said, “but I always try to be the best athlete out there technically and that helped today,” he continued, adding that’s it’s good to be back after losing his enthusiasm for a while.

Another athlete rediscovering her mojo was Bethan Davis (Cardiff, Andi Drake) who was equally composed in the 10k walk despite the flurry of cards being shown as she won the U23 women’s race in 47:07.97, good for seventh on the all-time list. Superb despite the cool conditions, it certainly suggests there’s much more to come from the No.2 on the 20km all-time list. “She’s not anywhere near her best yet,” said coach Andi. “This is great progress and it’s good to see her enthusiasm return.”

No stranger to all-time lists is Dominic Ogbechie (Highgate, Marcus Guei). The U17 age-group record holder in the high jump (with 2.22) sailed over 2.09 at the third time of asking to secure the U20 title. From there it was a case of how high could he go? First-off he had the bar raised to 2.13, a height he flew over at the first attempt before calling it a day at 2.16, his final attempt just nicking the bar off.

“Close but no cigar,” said national coach Fuzz Caan as 1.77 proved just out of reach in the women’s U20 high jump. An intense competition had left two in the hunt for the title, both of whom had three great attempts at that final height, but it was Halle Ferguson (Trafford, Andrew Wood), the UK leader in the U17 age group with 1.75, who took home the gold thanks to her superior card up to 1.73. “I’m pleased with the way it went,” she said. “My run-up was good, but even so I’ll be working more on that for the rest of the season,” she added.

Fine tuning the run-up was also order of the day in the triple jump. The opening rounds of the triple jump didn’t go well for Lily Hulland (Trafford, Femi Akinsanya) as she took her time to find her rhythm; but living up to her coach’s pre-event predictions, she finally found her form and won the U23 women’s gold with a season’s best of 12.40.

In the field, Coach Paul Head saw his daughter Katie Head (Newham & Essex Beagles, Paul Head) add the U23 women’s hammer title to her U20 gold from a few years back with a fifth-round effort of 62.38. “Solid, but she needed a bit more competition,” said Paul. “That will come next week [at the trials in Manchester].” In the men’s U23 event, Ben Hawkes (Worthing & District, Adrian Palmer) won with 68.03, a personal best.

And James Wordsworth (North Shields Poly, Neil Ellerby) was also in the best form of his life as he improved his best by 52cm to win the U20 men’s discus with a 50.20 throw. Samantha Callaway (Newham & Essex Beagles, David Callaway) was in equally dominant form to take the U20 women’s discus with 51.82.

Elsewhere in the throws, the U23 javelin competition saw Daniel Bainbridge (Shaftesbury Barnet, Michael McNeill) take gold with 70.58 in the men’s event with Bekah Walton (Blackhealth & Bromley, David Turner) victorious in the women’s with 50.20.