It may have been a couple of seasons since this championship last took place, but time most definitely hasn’t stood still in the interim, as a host of superb performances confirmed the future is as bright as ever – if not more so – in the U20 and U23 age groups.

On day one on the track, the sprinters displayed a series of controlled but powerful heats in both the men’s and women’s age groups suggesting the finals would be something to relish. Indeed, one GB team selector even predicted a 10-zero something in the men’s U23 final such was the impressive nature of one or two of the prelims.

The winning time – 10.55 – may not have been quite that (it was a little cool after all), but it was superb to watch, the result in doubt until the final stride. On this occasion it was Jona Efoloko (Sale Harriers, Clarence Callendar) who surged through to take it confirming his 10.36 form from Loughborough late last month.

It was a much clearer picture in the U20 men’s race as Toby Makoyawo (WSEH, Peter Griffiths) ran away with the final in a very controlled 10.64, putting daylight between him and the rest of the field within 40 metres. More in the tank for the 10.35 man? Judging by the relaxed way he ran this race, you bet!

Amongst the women, just 0.01sec separated the first two in the U20 race. Nia Wedderburn-Goodison (Harrow), the UK No1 in the U17 age-group, leaned on the line to beat the fast-starting Joy Eze (Gateshead Harriers) with 11.80, while the U23 title went to Kristal Awuah (Herne Hill Harriers, Matthew Thomas) in 11.67.

The longer sprints were equally exciting. In the U20 men’s 400m, Ed Faulds (Rugby and Northampton, James Wright) ran a superbly controlled personal best of 46.68 way inside the 47.50 needed for the Europeans and impressively the best part of a half second improvement on his previous best.

Also, already qualified for the Euros is Mary John (WGEL, Alan James) thanks to her 53.49 earlier this month, but she further emphasised the great form she’s in with a comfortable 53.71 victory in the U20 women’s 400.

Headlining the field events was the hammer and the women’s U20 event was a superbly competitive affair, won by the UK no.1 going into the event – Charlotte Payne (Reading, Paul Dickenson). Close behind was Kirsty Costello (Kilbarchan) who briefly led with her Euro qualifying throw of 59.19. Charlotte is not quite in top form yet compared to her form last month (when she threw 63.47), said throws legend and former Olympian Paul Head who was watching. “But she’s very competitive,” he added after she hauled the hammer out to 60.92 in response to her Scottish rival taking the lead with what was a personal best. “It’s a really encouraging competition given that this year it’s so early in the season for many and it’s difficult to find any consistency. Usually most would have thrown [in training] thousands of times, but it’s currently just in the hundreds for all but a lucky few.”

Not to be outdone, the men’s U20 competition was as exciting thanks to a massive, close to four-metre personal best of 68.26 from Harvard-bound Kenneth Ikeji (Basildon, Paul Head). “We’ve been expecting that for a few weeks,” said his coach Paul, pleased to see his athlete finally confirm all the promise he’s shown in workouts. He’s just finished his exams so now is really clicking,” he added, revealing Kenneth actually threw a best of 65 metres in training just a couple of hours after throwing 63 at the Southern Champs recently. He ended the competition with another big throw, 68.09. Behind him Alex Bernstein (Preston Harriers, Bob Welfare) put together a solid series, highlighted by a 65.12 but couldn’t match that enormous third round effort from his Basildon rival.

Talking of PBs, in the U20 men’s pole vault, Lazarus Benjamin (Sale Harriers) and Reuben Nairne (Giffnock North) both popped over 5m for the first time ever with first time and third time clearances respectively at 5.05. The pair raised the bar to that Euro qualifying mark of 5.15 but that proved too much on this occasion and Lazarus won the title on countback.

Producing your best when it matters is always the name of the game at major championships, 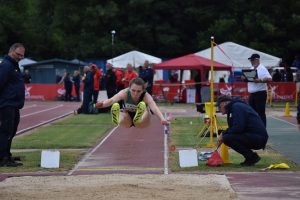 so congratulations to Lucy Hadaway (City of York, Matt Barton) who touched down at 6.53 in the fourth round of the U23 women’s long jump. That’s not only a lifetime best and way in advance of her previous best of 6.40 but it was also a European Champs qualifying distance. In total, five athletes jumped further than six metres on what was a decidedly cool June afternoon – truly an event with great depth!

One more European qualifier for the day came in the women’s U20 javelin when Elizabeth Korczak (Brighton and Hove, Bob Willows) finally eclipsed 50m with her final throw of 50.38, edging ever closer all afternoon despite slipping on the runway on her second throw. Thomas Holmes (Andover, Mark Bradford) won the U20 men’s event with a big PB of 69.44 but was just shy of the 70.00 needed.

Back with the vertical jumps, Bera Ajala (Edinburgh) confirmed his UK No.1 status with an early – and competition ending – 15.17 in the U20 men’s triple jump. It’s a season’s best and a good jump in the conditions, although well adrift of his lifetime best of 15.37.

Far more dramatic was the U20 men’s shot as just 12cm covered the top three after three rounds. Chris Dyrmishi (Northampton, Stuart Carlaw) increased his lead in the fourth round with a whopping 16.76, a PB of more than 30cm, but he had to be in that kind of form as Kane Aubrey (Wimborne) and Zac Davies (Bracknell, Andrew Hughes) both hit big marks of 16.44 and 16.36.

The track finals kicked off with the 3000 metres and two very different races. The women’s seven and a half laps saw the lead change regularly, with the result still in doubt just two metres from the line. In the end, Kaitlyn Sheppard (Cheltenham and County, Andrew Beadle) eased by U17 competitor Fleur Todd-Warmoth (Blackheath and Bromley, Phillip Kissi) who had taken the lead with two to go on the line to win in PB of 9:42.45. The men’s race was completely different as Alex Parsons (Team Bath, Kevin Brunt) hit the front from the gun and quite simply ran away from the pack with every passing lap to win easily in 8:31.58.

There were a series of straight finals in the U23 men’s and women’s 800 and 1500. Olivia Vareille (Falkirk) won the U23 women’s race in 2:07.67, while 1:46.77 performer this season Ben Pattison (Basingstoke & MH, Dave Ragan) turned on the after-burners following a 58 opening lap to rocket around the final 400 metres in a shade over 52 to confirm the strength-in-depth in this event is better than ever before (finishing in 01:50.95). Ben Reynolds (Cardiff) was equally swift for his lap of the U20 men’s 1500 – a 56sec last quarter mile securing him the title in 3:52.40, while Abigail Ives (Basildon, Richard Bullis) opted for the gun to tape approach for her 4:25.23 win in the U20 women’s 1500. On paper, the final times may look unspectacular, but in every race the last 150m told a very different story so be ready as there’s plenty to look forward to on Sunday and there will be some amazing performances – and the odd upset – guaranteed!

If you want to follow the Day 2 action on Sunday: