There were a series of outstanding races at the Saucony ECCA National Cross Country Championships as the event headed to Yorkshire. Whether it was some tooth and nail home straight battles, bold front running or the team packing to decide the team medals you wanted to see the most, there was a great day of action.

A testing but scenic course that eminently spectator friendly made the day all the more one to enjoy. 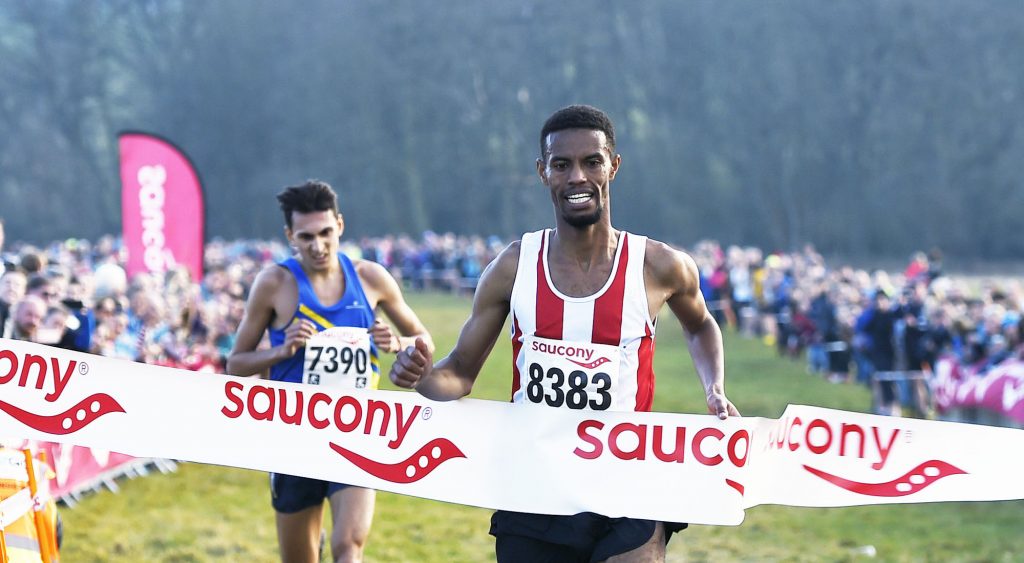 At the start of the second lap Mahamed Mahamed was hitting the front with Emile Cairess (Leeds, Phil Townsend) in close contention and Jack Gray (Cambride & Coleridge, Mark Vile) also taking close order. As the lap progressed Carl Avery (Morpeth, Lindsay Dunn), Adam Hickey (Southend, Eamonn Martin) and Linton Taylor (Leeds) also were also in the thick of the fray with Avery moving into contention right at the sharp end.

As the race continued Mahamed was relentless at the front but Cairess was looking poised to strike. In the long home straight the two were throwing everything at it with Mahamed kicking and kicking every time Cairess launched an effort to get past. It was only in the very final strides that Mahamed had it won with Cairess just behind and Avery having run himself into the last of the medal positions.

The second place of Cairess was an important contribution to a strong Leeds City club performance that saw them winning team golds with 110 points ahead of  the 191 of Tonbridge AC and 313 for Bristol & West AC.

Click here for full results of the Senior Men’s event 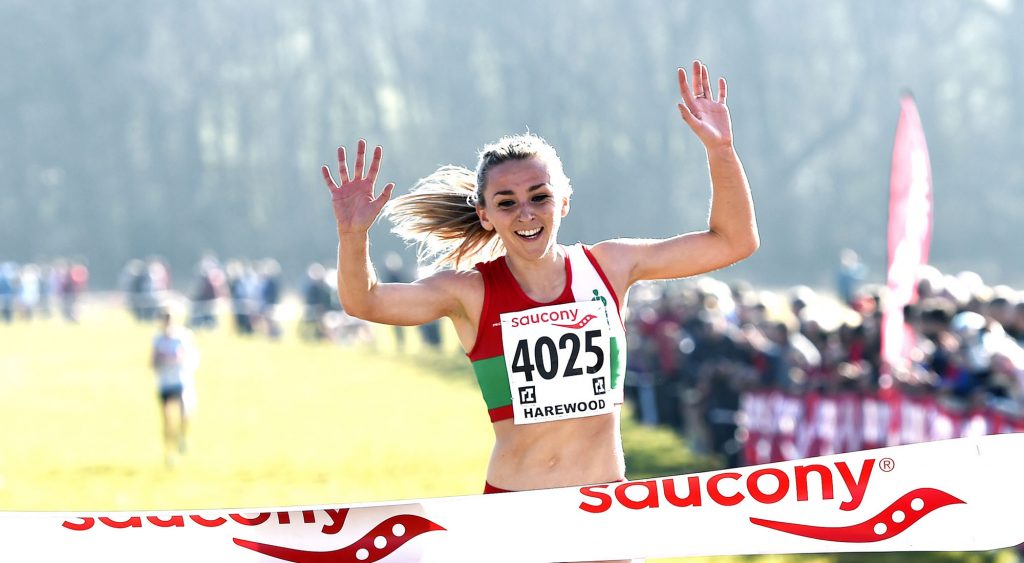 Into the second lap Woolven was pushing on in the lead with Emily Hosker-Thornhill ahead of Judd with Georgia Taylor-Brown, Louise Small (Aldershot Farnham & District, Mick Woods) and Claire Duck (Leeds, Mike Baxter) now also to the fore.

As the race hit the crucial stage it was Hosker-Thornhill who was pouring on the running and pulled away from Woolven to claim the title for the first time as Judd continued to battle away to come home with the bronze medal.

Click here for full results of the Senior Women’s event

As the race unfolded it was a pack of four that were clear midway through the second lap with Rory Leonard (Morpeth), Euan Brennan (Ilkley Harriers AC, Andrew Henderson), Nathan Dunn (Preston Harriers, Peter Crook) and early leader Jeremy Dempsey (Shaftesbury Barnet, George Harrison) now having daylight on the rest of the main contenders.

It was Leonard who had the strength and speed as the race rolled on to split the group and pull away. It was the Preston Harrier Dunn who was best equipped to chase and he was rewarded with a silver medal 11 seconds back with Dempsey just behind to take the bronze.

The team results saw a win for Tonbridge AC (103) ahead of Cambridge & Coleridge AC (126) as Reading AC secured bronze with 159 points.

Click here for full results of the U20 Men’s event

Amelia Quirk (Bracknell, Mick Woods) showed her form to run away from the field in the U20 race. In an impressive display of front running she opened out an seemingly continuously extending gap as Grace Brock (Cornwall AC) led the chase. As the race played out Jessica Mitchell (Havering AC, Patrick Gahagan) who was picking her way through the field. In the charge for the line over the latter stages it was she who overhauled Grace to take the silver medal as the Cornwall athlete came in for the bronze.

It was Herne Hill Harriers who won a very close club title with just two points separating them from Aldershot Farnham & District (95 to 97). The final medallists were Basingstoke & Mid Hants AC which was another close affair as they scored 123 to Blackheath & Bromley Harriers AC’s 129 points.

Click here for full results of the U20 women’s event

There was an epic battle over the last lap of this one with a big pack in contention at half way before the race exploded in the second lap and a group of three broke away to do battle for the medals. In the end it was Sam Charlton (Wallsend, Paddy Dinsmore      ) came clear of Will Barnicoat (Aldershot, Farnham & District, Trevor Raggett) and Henry McLuckie (Shaftesbury Barnet Harriers, Paul Simpson).

In the club competition gold went to Invicta East Kent AC with 119, ahead of a close battle for silver and bronze between Charnwood AC (132 points) and Tonbridge AC (138 points).

Click here for full results of the U17 Men’s event

There was a win for Oliva Mason (Border, Graeme Mason) who continued her record of winning a national title in each age group she has contested – she hit the front in the latter stages to take a two second win from Darlington H&AC’s India Pentland (David Lowes). Charlotte Alexander (Herne Hill Harriers, Wayne Vinton) and Tia Wilson (Bedford & County) enjoyed a terrific battle for bronze with Charlotte securing the last of the medals in the latter stages of the long home straight.

Click here for full results of the U17 women’s event

Alexander Thompson (Wharfedale Harriers) took over from early leader Louis Small (Ashford) to run clear and claim the national title to add to his Northern championship win. The Southern champion then won the home straight battle with Matthew Taylor of Tonbridge to claim silver as the runner up from the Southern completed the medal positions with Lewis Sullivan (St Edmunds Pacers) one place behind.

Aldershot, Farnham & District were convincing winders of the team competition with 56. Tonbridge AC (141) and South London Harriers (187) secured the other medals.

Click here for full results of the U15 Boys’ event

Holly Weedall (Vale Royal, Andrew Carter) looked in top form as she ran clear of the field in the U15 Girls Race. It was Kiya Dee (Highworth RC) who led the chase and was rewarded with a silver medal. Working through the field was Indienne King (Wreake & Soar Valley AC, John Skevington) and she picked off members of the early lead pack to move into third place ahead of Megan Harris (Basildon AC, Richard Bullis).

The top three were all relatively close in the team competition with the medals going the way of Blackheath & Bromley Harriers AC (162), City Of Norwich AC (171), and Windsor Slough Eton & Hounslow AC (188).

Click here for full results of the U15 Girls’ event

There was a repeat from the 1-2 at the Southern Championships as Benjamin Peck (Thetford) pulled ahead of defending champion in this race William Rabjohn (Poole AC, Mark Pauley) to claim the title. Having run in third place for much of the race Alex Adams (Stratford Upon Avon) held off the chasing pack behind him to ensure he claimed the bronze.

South London Harriers took club gold with 102 ahead of a great battle between Bracknell AC and Cambridge & Coleridge AC with the former taking the silver by just two points – 155 to 157.

Click here for full results of the U13 Boys’ event

It was Scarlett Livingstone (Exeter Harrier) and Zoe Gilbody (Wolverhampton & Bilston) who broke clear of the pack to take a 1-2 in the U13 girls’ race. By the line Scarlett had extended her lead to a more comfortable six second advantage. And in a charge through the field Abigail Reid (John Stow) of Woodford Green AC with Essex Ladies moved into third place to only just miss out on silver as Phoebe Gill (St Albans Striders) was in fourth.

The club competition went the way of Tonbridge AC (90) with Chiltern Harriers AC (173) and Middlesbrough AC (189) taking the other medals.

Click here for full results of the U13 Girls’ event