Distance running couple Diane and Graham Newton have come a long way since chancing across a group of runners tearing down the hill in an off-road race called the Grizzly. 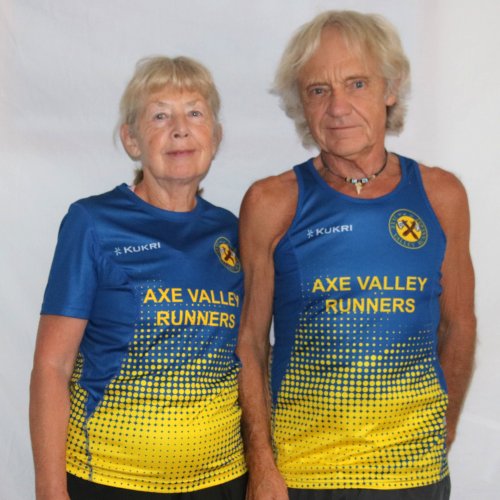 The pair, in their 60s at that moment in time were out on a walk along the East Devon coastline but couldn’t fail but be impressed with what they saw. “That looks fun, I’m going to give that a go,” said Graham. Diane, too, was bitten by the bug and just two months later attempted her first run as well.

Now, a decade down the line, both now in their 70s and both fitter than ever before, they represented England at the Richmond Half Marathon.

“It was so exciting to pull that Kukri England vest on,” says Diane. “It just felt so light, it fitted perfectly, and it just felt so wonderful,” she laughs.

Something as simple looking is surprisingly advanced when it comes to sports science. Breathable kit is vital for heat management and just a small percentage rise in your core temperature will result in a loss of performance. Even overheating by a couple of degrees will result in you slowing by as much as 30 seconds per mile. Sports clothing, such as the Kukri range is all about allowing sweat to be wicked away and keeping you in the best possible shape.

It’s a long way from those early days of heading out in beach shorts and whatever the couple could find in the wardrobe that vaguely be called running kit.

“Now we both understand the importance of breathability and performance fit,” says Diane. “In fact, I can’t run in anything else as I get really hot when I run. You still see that today – people heading out in way too much kit and overheating,” she continues.

“I remember running my first marathon,” Graham recalls. “People just laughed at me as I had old tennis shoes on. Obviously, I’m a bit more hi-tech these days.”

Correct gear in place – her club Axe Valley Runners gets its vests from Kukri – “so much lighter and more comfortable than traditional old-fashioned ones,” she laughs, the couple also have some great words of advice for anyone thinking of getting into running.

“Join a club,” says Diane. “When I first started running, I couldn’t run from one lamppost to the next. When you start you need that help and encouragement; you need someone.” And once you’ve done that, says Diane, “you just have to put yourself out there and not worry about it. I often meet people who are amazed I can run, and they say: ‘I wish I could do that’. Well, you can!”

It is inspirational when you listen to her. She’s gone from, in her own words “someone who was overweight and couldn’t run a step” to an athlete who ran seven half marathons in her 70th year as a birthday celebration to mark her seven decades. Modestly she adds: “somewhere along the line I must have done the qualifying time to get that England vest.”

Graham is equally understated. He’s just run a tick outside 3hr 30min for the London Marathon, but says the secret isn’t really loads of hard work, it’s all about having fun. He meets up with a few friends a couple of times of week, goes for a run and races a fair bit. “I’m just pleased to able to do it at my age,” he says.

Diane agrees. “I’m just out there enjoying it,” she says, adding she’s just finished a nine-miler and might go for a swim later that afternoon.

Amazing. It’s a great story and one to be inspired by. Have fun, join a club and take the time to invest in the right kind of kit – Kukri are on hand to help you there – and the amazing world of running and racing awaits you. And who knows, maybe you too can pull on that Kukri England vest. Anything is possible. Just ask these two.