Intense competition with big rewards at day 2 of senior champs

It was all about national team selection on Day two of the UK CAU and England Athletics championships as the winners in every event were named for the Manchester International on 14 August . With that guaranteed England team cap as the prize, not to mention an English title, competition was understandably intense all Sunday with more than one winner needing a top three UK ranking performance to take home the gold.

A fifth round effort by Jessica Mayho (Birchfield, Jorge Rodrigues) of 64.52 a PB moved her to number 2 in the British rankings for this year and in this instance, to the lead in a hard fought hammer competition that had seen Rachel Hunter (North Ayrshire, Henry Hunter) looking like she would take home the gold because of her early 64.34. That was good for third on the UK list. In this instance Hunter couldn’t go any further while Mayho found herself in the form of her life and ended the competition with another great looking PB of 65.18 to cap a tremendous competition. “After a rocky start (a first round no throw) I got my mind in order and threw two PBs,” said Jess. “It must have been a great competition for the spectators and I’m really pleased it showed my mental toughness. I’m going to seal the way I’m feeling right now in a bag so I can call on it again!” 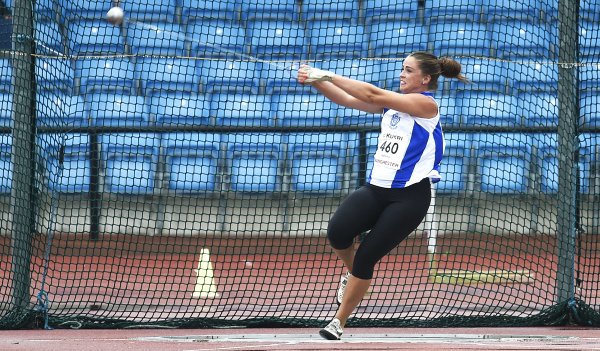 Also moving up to  number 2 on the 2019 ranking lists was Jess Turner (Amber Valley and Erewash, Nick Dakin) who produced an excellent looking 56.31 in the women’s 400 hurdles despite the cool conditions. “I came here hoping to win and I finished strong, so that was good” said Jess. “This is an odd season and it’s been a slow burner but next up is the relay for GB.”

In the 200m, a sub 21-second semi final wins in the men’s races set the scene for a cracking final. Edmond Amaning (TVH), the defending champion eased down to 20.95 in his semi and definitely looked like the man to beat and so it proved as he powered to 20.85 (-0.8) in much trickier, wetter conditions. “This was my first race for two months as I had pulled my hamstring,” Edmond said. “I felt nervous in the heats, but felt much more comfortable in the semis.” While in the women’s race Kimbely Baptiste (Crawley) ran a solid 23.84 in the 200m for her fourth successive title, not bad for her first outing of the season!

The men’s 800m was a fascinating race with Joe Reid (Cardiff, Matt Elias) starting as favourite thanks to six sub 1:48 clockings this season. He wasted no time in hitting the front and towed the field through a swift opening 400m in 53.15. He then stretched the chasing pack out behind him, passing 600m with three rivals close behind. From there it was a case of hanging on, which he did – but only just – as Will Snook (Harlow, Andrew Henderson) closed to within a stride in the final few metres. Reid won with 1:49.26. “My aim was to take it out,” Joe said, explaining his front running tactics. “I want to get ready for trials so thought that was a good idea.”

The men’s 400m proved to be a mirror image of the two lapper in that Niclas Baker (Crawley) really went for it, opening up a sizeable lead going into the final 80 metres. But that’s where the similarities end. Defending champion Sadam Koumi (Birchfield, Tony Hadley) had other ideas and dug deep to win in a very impressive 46.21, his third consecutive title. Baker did go away with a PB of 46.46 so can be satisfied with the way his form is progressing. Indeed all seven finishers cracked 48sec to illustrate the great strength in depth this even is currently enjoying. Jasmin Liverpool (Warwick Uni, Stewart Marshall) was just outside her best in the women’s 400m, taking the gold in 53.34 to add to her relay silver from the European U23s. “I’m really proud to have taken my first senior title,” said Jasmin. “I felt really good going into it, so I thought I had a chance.”

Alistair Chalmers (Guernsey), the England junior champion is now the senior champ thanks to his clearance off the last hurdle. Up to that point he trailed Efekemo Okoro (Birchfield), but drove hard off the final flight to be rewarded with a swift 50.20. Okoro stopped the clock at 50.34 for a PB in second. “I went to the Euro Juniors and was disqualified (for stepping on the line) so I needed to come here and bounce back,” said Alistair. “My family and friends gave me lots of support and confidence and I thought I could drop a solid time.” 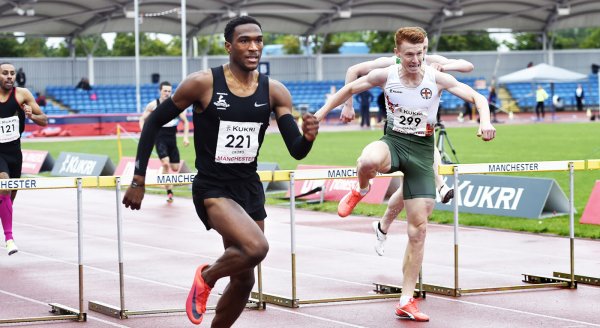 Another U20 keen to prove herself was Felicia Miloro (Sutton in Ashfield, Henrietta Paxton/Scott Simpson) who won the women’s pole vault with 3.90, while Britain’s number 1 Naomi Ogbeta (Trafford, Tom Cullen) defended her triple jump title with 13.67 close to her outdoor best for 2019. “As this is my home track it’s always nice to win here,” she said. “I have to say though, I had trouble seeing the board as the rain was so heavy.”

Ali Smith (Guildford and Godalming, Chris Zah) completed a nice double adding to the 100m she won on Saturday with a season’s best 28.41 in the ambulant 200m. And finally, clearly keen to get in on the world record setting act of yesterday (there were two), Eleanor Simpson (City of Sheffield and Dearne, Jessica Davidson) floated to 39.62 in the Race Running 200m. ‘Floated’ being appropriate given the torrential rain falling during her race. Can she go faster? You bet.

A few hours’ south of Manchester, Milton Keynes hosted a very competitive day of 5000m track races on Saturday confirming that strength in depth is returning to the distance running community. In an evening of PBs – there were six in the first 10 of the men’s A race for instance – it was Ben Bradley (AFD, Craig Winrow) who emerged victorious with 13:57.33 – yes, you guessed it a PB! It was a slightly more predictable affair in the women’s race as England champ over a variety of distances from 800m upwards Jess Judd (Blackburn, Mick Judd) used her strength to pull away for a comfortable 15:37.88 win.