Day one of the UK CAU and England Athletics Champs was all about finding form in what is proving to be an unusually tricky season to prepare for, given the World Champs are still many weeks away. More than one champion concluded this was a nice way start to the season – perhaps an odd phrase for late July and a major championships but a sentiment that actually makes perfect sense this year even for those without Doha on their radar given the later-than-usual date of the British champs.

What it did mean was it was difficult to predict who would take any given title. For instance, even following both men’s and women’s semi finals in the 100 metres it was impossible to call where the titles would be heading. One or two stood out in the heats, but then the story changed for those semis. This would be all about who could hold their nerve for the final? Well, in the men’s race it was Kyle De Escofet (Birchfield Harriers, Andy Paul) who did just that, pulling clear after 60m to take the title with room to spare in 10.49 (-0.6) from Imranur Rahman (City of Sheffield and Dearne, Steve Fudge) who had surprised a few onlookers after his good looking run in the semis. “This was my first time ever at this championships,” he said, explaining how he might have not been on many people’s radar beforehand. “I wanted to run here in Manchester to see how the track is as I’ve never run here before.”

Five minutes later, the women’s race went down to the wire. For 90 metres it looked like Hannah Brier (Swansea, Glyn Hawkes) had it, but defending champion Kimberley Baptiste (Crawley) powered through in the final five metres to win in 11.90 (-1.5), just 0.07sec ahead. “I felt great and hoped for a PB, but the weather wasn’t up for that,” she laughed, pleased to defend her title. She’ll be in the 200m tomorrow.

Earlier in the day, Craig Murch (Birchfield Harriers, Lorraine Shaw) proved too strong in the men’s hammer – effectively winning the competition with his very first throw of 68.78. Building on his 70.24 he threw in the BAL last week he then hit 69.70 in round three before hauling the hammer out to 72.33, a huge PB by more than a metre and good for number 3 on the British rankings for 2019. It’s a card worth noting as his 71.56 in round five would have also been a lifetime best prior to this event. “Today was the first day of my season,” he said, explaining how he’s just now finding form after a slow start to the summer. “I came with a PB in mind but my target is 74 metres (the Euro qualifying mark for 2020).”

Also in PB form and rolling into shape for the trials and perhaps beyond was Gavin Johnson (TVH, Piotr Spas) who won the men’s javelin with 68.71, good for number 6 on this year’s rankings and surely worth a little more in better conditions.
The women’s shot was an exact repeat of last year as Sophie McKinna (Great Yarmouth, Mike Winch) one again took gold with 17.74 in front of Amelia Strickler (TVH, Zane Duquemin). Conditions were tough today,” she said, echoing the sentiments of many who struggled with the increasingly wet circle or run-up. “The distance was okay, but nothing special. Hopefully I’ll make the World Champs later on this year.” 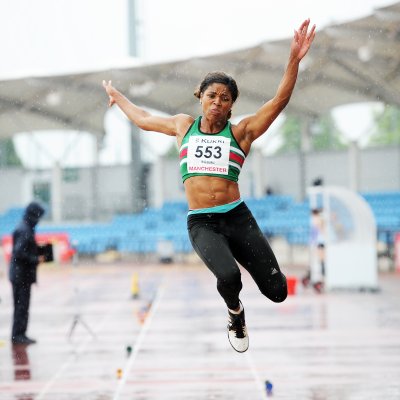 On the subject of repeat golds, Nathan Fox (Shaftesbury Barnet) added to his 2015 victory with a 16.06 leap in the men’s triple jump. “I’m really looking forward to the British trials now where I hope fireworks will be on display,” he said, more than pleased with the way he handled the weather. Abigail Irozuru (Sale Harriers) won the women’s long jump with 6.36. “It’s a joy to be back again,” said Abigail who has had three surgeries on her ruptured Achilles and at one point even retired. “I need 6.72 for Doha, but I’m only a few centimetres short so hopefully I can do that later in the season.”

There was a certain inevitability about the men’s 3000SC as the two favourites Tommy Horton (City of Sheffield, Bashir Hussein) and Daniel Eckersley (Kingston Poly, Geoff Watkin) enjoyed a race-long battle as expected. For more than 2km it was anyone’s call, with Eckersley keen to try and break free; then, as the form book hinted Horton, the champion in 2016 who has 1:52.0 800m speed in his armoury hit the front with 300 metres to run. Given the raw speed he can currently call on it was no real surprise to see him surge away and relegate last year’s silver medallist Eckersley to that slot again, although his hurdling technique over the final water jump did draw an anxious gasp from the commentator as he hit the water a little more deeply than he probably anticipated.

Last lap acceleration was also the story behind the closely matched women’s 1500m. Danielle Hodgkinson (Wallsend, Paddy Dismore) clearly is in the form of her long career as she took the title in 4:26.36, her first national gold. “I wanted that so much for years,” she said afterwards, overjoyed with her win. In truth it never looked in doubt over the closing lap as she followed the early pace of 76.9, 2:29.0 set by Byrony Gunn (Birchfield, Peter Stewart) before kicking hard with 410 metres to run. From there she piled on the pressure to run out a comfortable winner.

The ambulant 100s featured high quality fields that included Zak Skinner (Loughborough, Aston Moore) who looked particularly impressive running 11.26 in the morning and 11.28 later in the afternoon; first in the race and first using the points system. Conrad Will (Oxford Uni, Joe McDonnell) was equally dominant on his way to a 12.45 clocking to win the second heat.

In the women’s ambulant sprint, Ali Smith (Guildford and Godalming, Chris Zah) followed up her podium finish in the Diamond League (13.36) last week with a controlled looking 13.84 in the morning race. Simran Kaur (Bristol and West, Nick Harris) took the next event in 13.77 to confirm she’s made the right choice to move to athletics from football especially as she left Kadeena Cox (Sale, Mark Cullen) in her wake (14.13). In the afternoon race it was Smith who turned on the burners to to win in 13.66.

In the Race Running event there were two world records despite the steady rain. Kayleigh Haggo (Ayr Seaforth/Red Star, Janice Eaglesham) looked very powerful on her way to 18.99 in the 100m, while Gavin Drysdale (Red Star, Janice Eaglesham) also got in the act and clocked another WR with 17.26. It’s early days for this event and records will fall regularly but it was exciting nonetheless to see two go in succession. And it was also very encouraging as the IPC World Champs in Dubai unlike Doha’s October World Champs aren’t until November, so plenty of time to find a bit more form!

*Tomorrow’s finals start at 11am so if you fancy some national championships action, get yourself along for a great day!