After fears the event may be cancelled due to snow disrupting travel in the days leading up to the competition, on the day of the race the grounds of Bicton college were in fact free from snow and ice, under clear blue skies. With over 1800 entries, athletes came to the event with high spirits and painted faces ready to take on the course. The course itself featured loops around the college grounds, with runners tested with two steep hills at the end of each lap. A water feature by the edge of the lake was made optional due to the freezing temperatures on the day, with many runners still choosing to diverge from the main course to run through it! 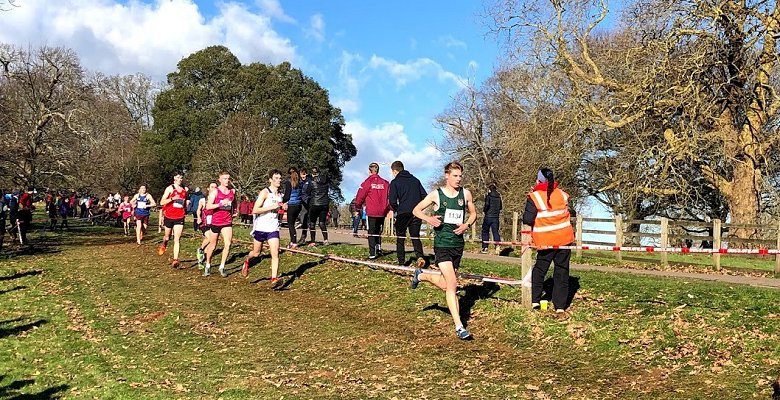 St Mary’s took all the individual titles on the day, but the team prizes were spread more evenly between the Universities. In the Men‘s A race, after 31 minutes and 13 seconds over a challenging 10km course, the leaders, Emile Cairess and Patrick Dever, were separated on the line by one thousandth of a second after an incredible sprint finish, with the eventual winner Cairess being given the verdict from a photo finish. In the Women’s race, the European U23 cross country champion, Anna Emilie Møller, took the title for St Mary’s over 6km; 11 seconds clear of Amelia Quirk in second place for Birmingham. In the Men’s B race, Abdi Sharif took the third title for St Mary’s from a field of over 500 runners over 8km. The Men’s B race is traditionally the most fun race of the day, with many athletes choosing to go through the optional water feature, with one even diving head-first into the lake!

Exeter University managed to field their largest team ever, with over 70 competitors entered into the race. In the Women’s race there were around 40 entrants, including runners from the Triathlon and Cool Runnings clubs. Eilish O’Grady, after recently being selected to represent Ireland, led the team home, finishing in 39th position. She was closely followed by Suzie Reid and Alana Dunn bringing the women’s team home in 11th position. In the Men’s A race, Ben Holmes was first to finish in 49th, followed by James Hancock, Jack Bond and Ted Chamberlain, meaning the team finished in 13th position. For the Men’s B race, Exeter’s Cross Country captain challenged all the men to run through the water, with the majority taking up the challenge, finishing strongly in 17th position. Everyone who ran had a fantastic day and created an incredible atmosphere for the athletes competing, especially at the challenging sections of the course. 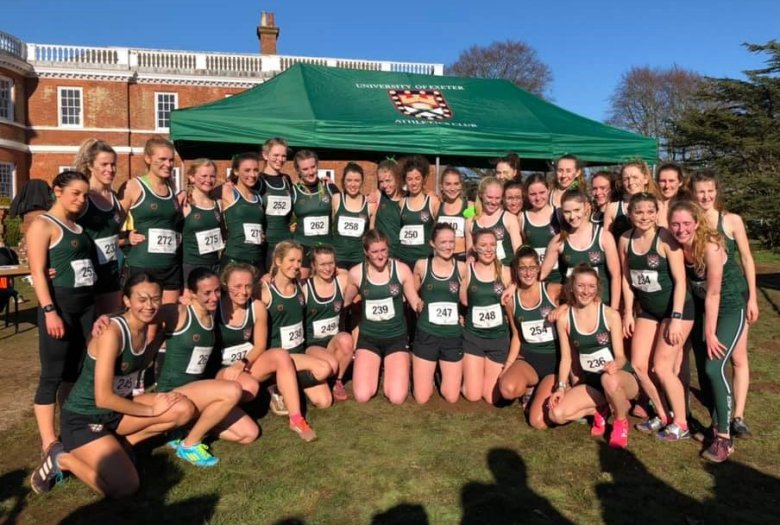 After first submitting a bid for this event in March last year, it has taken a tremendous amount of planning. This included multiple trips out to Bicton college to plan the course and establish the layout of the venue as well as organising a post-race social to fund the event. This event would not have been possible without all the volunteers from both the University and local athletics clubs, who gave their time and equipment for us on the day. We would like to thank all of those involved, and hope to maintain these links formed as the University Athletics Club continues to grow in the future.

Reflecting on the event, Stephen Brown, from Exeter University Athletics Union said, “It was incredible to be the hosts of such a fantastic event is such a special location. Being in the South West we are lucky so have some truly stunning outdoor environments that are able to accommodate such huge sporting events. As the University of Exeter Athletic Union team, we were thrilled with how smoothly the event went and it clearly shows how professional the University of Exeter and our Athletics club are in delivering first class sporting events.”

“It goes without saying but there is a huge amount of time, effort and hard graft that is put in behind the scenes to ensure a seamless event like this talks place without a hitch. We would particularly like to praise Penny Oliver, Athletics Club Captain and Emily Harvey, our competitions coordinator, for taking on such a lead role and using their exceptional planning skills leading up to the event and then overseeing proceedings on the day. We would like to thank our partners who helped us make the event such a success including: Bicton college, BUCs and South West Athletics Academy.”