The sodden grounds Temple Newsham House formed the scene for the 51st Girls and 59th Boys ESAA English Schools’ Cross Country Championships 2019. The wind blew and the rain fell all day, turning the grounds into a mud bath, but that did not deter the more than 2,000 athletes who featured across the six races. 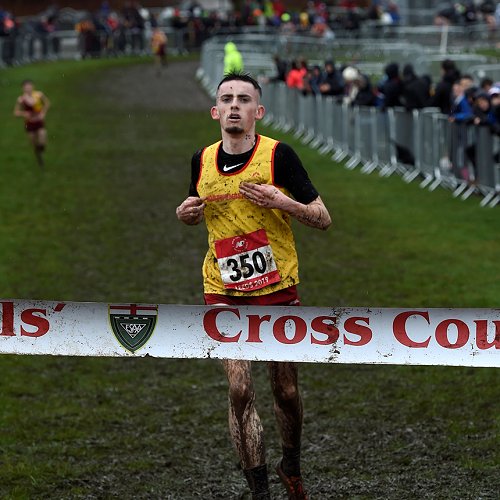 Sam Charlton (Club: Wallsend, Coach: Paddy Dinsmore), representing Northumberland (pictured), won the senior boys race in atrocious conditions. It was the final action of the day, and the chewed up course presented constant challenges, particularly at corners and on climbs. Displaying terrific strength over the hills on the final lap, Charlton emerged from the lead group on the second long loop to win the 6,700m course in 21:38. It was a win-worthy run, and the exertion did not prevent him from congratulating the athletes who trailed him over the line. Winning the battle for silver was David Stone (Shaftesbury Barnet, Jeremy Sothcott), nine-seconds behind Charlton; his Middlesex teammate, Jem O’Flaherty (London Heathside, Kabir Kemp), was a further ten seconds back to win bronze.

Kent scooped the team title with 155 points ahead of Sussex (165pts) and Hampshire and Vectis (276pts). 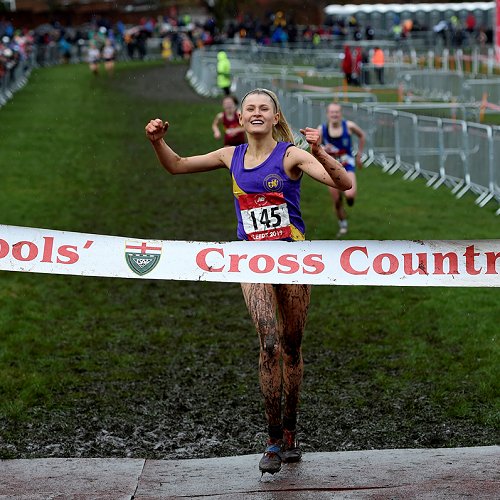 The lead was never constant in the senior girls’ race, making for a great finish. Georgia Hayes (Reading AC), of Berkshire, made a break as the set off for the second loop of the 4,100 course, but it wasn’t as decisive as the move made by India Pentland (Darlington, David Lowes), running for Durham (pictured). She shadowed the lead group through most of the race before bursting as they came into the final straight, winning in 14:58 – just four seconds ahead of Hayes. Only two seconds back from her was bronze medal-winning Kate O’Neill (Havering, Patrick Gahagan), of Essex, who had battled at the front throughout.

With four runners in the top 25, Surrey claimed the team title with 152 points, with South Yorkshire (300) second and London (382) third.

In the first race of the day, Sussex runner Bethany Cook (Bodyworks) won gold after a thrilling duel with Wiltshire’s Beatrice Wood (City of Salisbury, Dave Amey). The two had broken from the lead group late on the first loop. Although Wood did her share at the front, Cook, who had led the break, had the reserves to pull away when the line beckoned. She won the 3,710m course in 13:13, with Wood a further 13 seconds back. Bronze was won by Emily Shaw (Wimborne) for Dorset.

In the inter boys race, Mohamed Ali (Ealing Southall & Middlesex, Steve Mann), of Middlesex, was first to let his guard down, moving to the front of a large lead group as they completed the first loop of the 5,220m course. It was not the knockout blow he had hoped for, though: Oliver Smart (Tavistock Run Project), of Devon, ran in his shadow and moved to the front with a quarter of the race remaining and didn’t look back, winning in 16:43. Will Barnicoat (Windsor Slough Eton & Hounslow, Trevor Raggett) was second home for Surrey, with Louis Small (Ashford AC), of Kent, just behind for bronze.

With three runners in the top ten, Kent won the team title on 155 points. Devon, also with three in the top ten, were second with 268 points, while Derbyshire accumulated 313 points for team third.

Kiya Dee (Highworth/Gloucestershire Schools), of Gloucestershire, found great closing strength to win the junior girls race. Cornwall’s Maisy Luke (Cornwall AC, Christopher Jeffery) led the 3,710m course early on, showing a swift foot on the first hills, but was slowly reeled in on the second loop. Dee was dominant in the end, winning in 10:26. Luke held for silver in 10:37, a second ahead of Scarlett Livingstone (Exeter), of Devon.

The team standings were topped by Cheshire, who collected 275 points. Their northern neighbours Lancashire were second with 341 points, and Kent third (366).

In the boys’ junior race (start pictured), Lewis Sullivan (St. Edmund Pacers), of Suffolk , and Josh Blevins (North Shields Poly, Lee Morgan), of Northumberland, made an early break. It was the former who prospered in the closing stages, winning the 4,100m course in 13:23, nine-seconds ahead of Blevins. Ben Peck (Thetford), for Suffolk, moved up through the course across the second loop to win bronze.