England Athletics took a team of eight athletes to Larne to compete in the Antrim Coast Half Marathon on the 29 August. On a record-breaking weekend the women’s team claimed a victory in the team competition with the men finishing 2nd. Individually 7 of the 8 team members picked up PBs with some stunning performances on a breezy but beautiful day on the Antrim Coast. 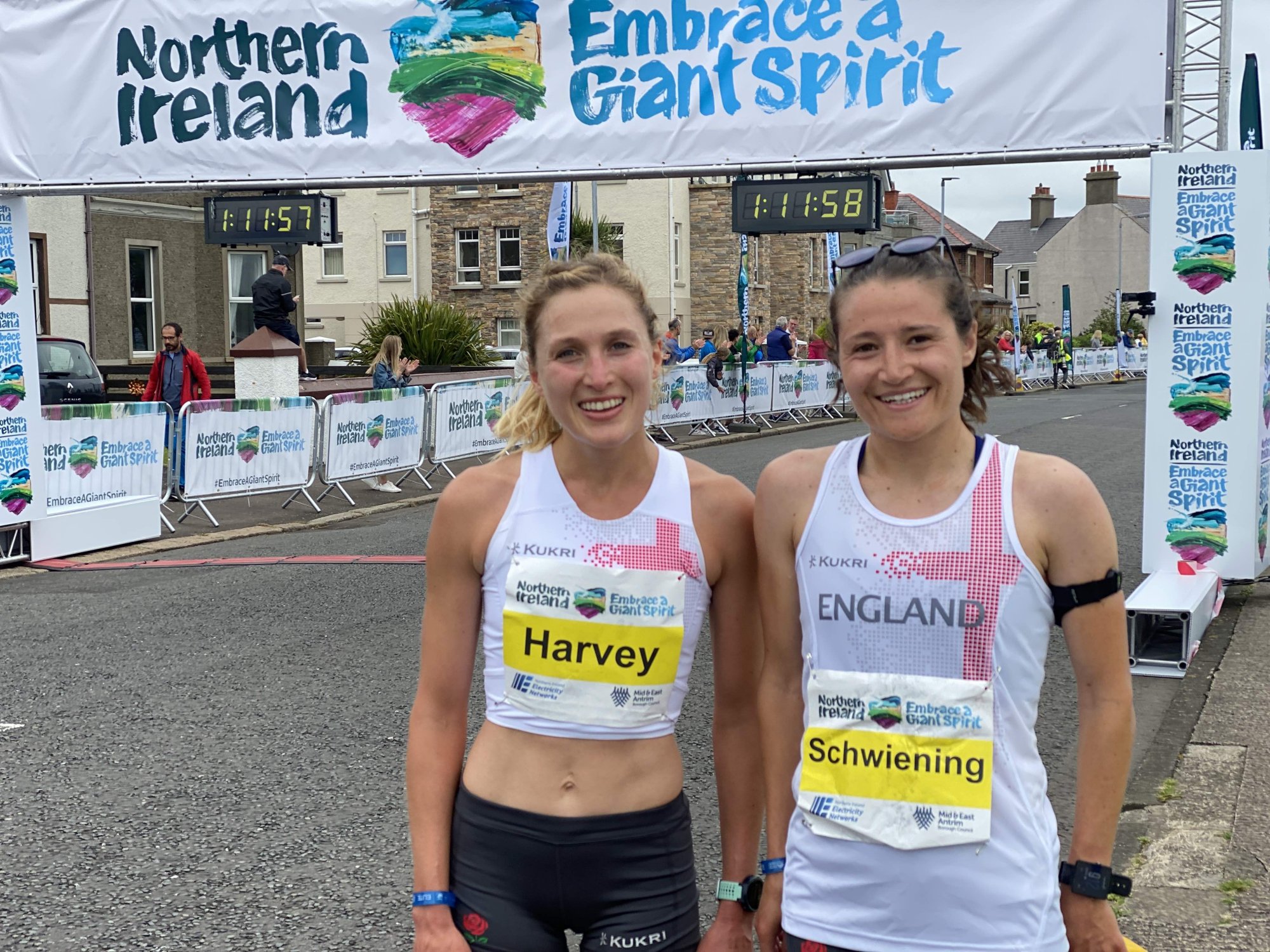 Rose Harvey (Clapham Chasers, Phil Kissi) claimed a huge five-minute PB to finish 3rd in a stunning 70:29 – a performance which takes her to 10th on the England all time rankings. Rose worked alongside George Schwiening (Cambridge & Coleridge, self-coached) for most of the race with both athletes going through 10km in 33:55 and 15km in 50:30 with Rose picking up her pace through the final 6km to run a big negative spit.

George held a consistent pace to finish in 71:11 – another huge PB of over 4 minutes, moving her to 16th on the England all time rankings and seeing the Cambridge & Coleridge athlete finish 4th. There were also fine PBs for Sophie Wood (Sale Harriers) who finished 11th in 75:15 and for Kirsty Longley (Liverpool Pembroke Sefton, Tom Craggs) who finished 12th in 75:18, a time which moved her to 4th on the UK V45 all time rankings.

The men also had much to celebrate. Nigel Martin (Sale Harriers, Norman Poole) continued his excellent recent form to claim a big 50 second PB to finish 5th in 63:20. Nigel worked together with big group which included the leading woman, Yalemzerf Yehualaw, and the other England men as they passed 10km in 30:21. The race follows the beautiful Antrim Coast Road out to Ballygalley where athletes double back to race to the finish in Larne. It was at this point the group started to break up with Jonathon Escalante-Phillips (Cambridge & Coleridge) working hard to hold his position to finish 12th in 64:13, a PB of over 80 seconds. Josh Grace (AFD, Geoff Watkin) was the next England team athlete over the line in 16th running 65:06 with Daniel Connolly (Mercia Fell) running a PB of 65:30 to finish 22nd.

“The bond between the team members, the beautiful route and the fantastic support provided by James McIlroy and his team at the race provided the perfect conditions for great performances. A huge well done to the team and their coaches, in particular thank you to Phil and Linda Kissi for their help across the weekend.”

The race provided a wonderful opportunity for the team spend time with other world class athletes including Sir Mo Farah and Jo Pavey, who were both present throughout the weekend. The race saw plenty of other fine performances by English athletes including for Marc Scott (60:35), Ross Skelton (63:39), Becky Briggs (73:30) and Chloe Richardson (74:55). The winning man was Jamal Yimer of Ethiopia who crossed the line in 60:29. The headlines though went to the aforementioned Yalemzerf Yehualaw who smashed the women’s world record to run 63:43, the first women in history to run inside 64 minutes.