Congratulations to all of our England Masters runners and Celtic guests who took part in the Simplyhealth Great Birmingham 10k at the weekend. 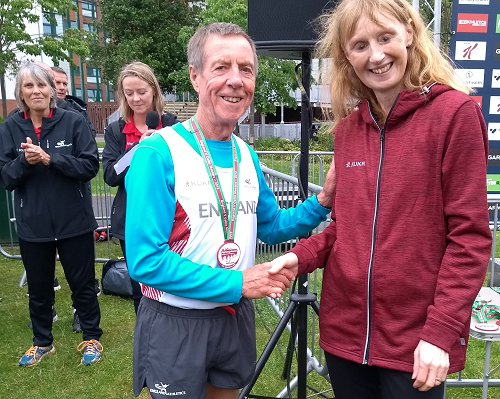 Over 170 competitive club runners aged 35 through to 83 years, representing over 150 clubs took part – producing some superb age group performances. Race day conditions weren’t conducive to producing fast times, but this didn’t stop the runners from making the most of the day and demonstrating that it’s never too late to set new goals and targets and be competitive in sport. It was a proud day for those taking part and also an inspirational one for many of those spectating.

As Alexa King F35- clubs told us after the race, “You have given me and my family a huge amount of pleasure and pride and it’s inspiring to see so many talented runners of all ages. My parents ran a lot in the 1980s (both did the London marathon) but stopped running due to knee/ hip problems in slightly later life; however, as a result of coming to watch yesterday my Mum (who is now 68) has promised to take up running again and I plan to hold her to it!! Thanks so much again, it was a fantastic day.”

Many of the team were just as competitive in the overall race as they were amongst their fellow masters runners. Kirsty Longley (V40, Liverpool Pembroke & Sefton) finished runner up in the overall race behind 25 year-old Chloe Richardson (Birchfield Harriers) and 26 seconds ahead of five-time Olympian Jo Pavey (Exeter Harriers) in third place. Whilst in the men’s race Stuart Spencer (V35, Notts AC) finished third to England international Doug Musson (Notts AC) and Graham Rush (Leeds City AC).

Whilst England dominated the team competition over the Celtic Nations, the two stand-out male and female WAVA age graded performances (based on age on the day) came from Scotland’s Alastair Watson (V60) and Fiona Matheson (F55). Matheson with the highest score of the day logging a world class 98.92% with her time of 38:17. England’s Yuko Gordon (F60, Fairland Valley Spartans) was the second highest score of the day with 98.23% for her time of 44:22. 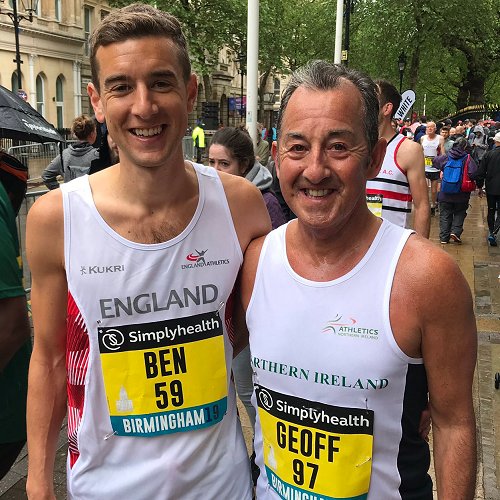 There were two father and son pairings on the day. Pictured are Ben Beattie (M35, Hallamshire Harriers) running for England with his father Geoff Beattie (M65, Sale Harriers) running for Northern Ireland. Ben finished 35:19, whilst father Geoff in 53:04 with Ben just edging the win on the WAVA age graded score. On the Celtic team, Mark and John Horsman representing Wales also made it another family double act demonstrating just what a fantastically inclusive sport running can be.

Charlotte Fisher (Road Running Manager) said after the event “These runners really are an inspirational bunch. The camaraderie amongst the two teams is great to see and anyone out there watching can’t help be inspired by their achievements.”