Championship titles, international vests and a string of personal bests were order of the day on Super Sunday – Day Two of the England Champs in Bedford.

This is the day 2 report; click for day 1 report

The very first track event of the day – the women’s 400m hurdles – set the scene perfectly for what was to come. Keenly anticipated thanks to a string of low 57s in qualifying, there was plenty of speculation as to how fast the winning time would be. Hayley McLean (Shaftesbury Barnet, Chris Zah) provided the answer just 56.08 seconds later, the meeting not even a minute old. It was fast; indeed it was a personal best but then it had to be as Nicole Kendall (TVH, Marina Armstrong) ran her all the way to the line, barely losing out with 56.11, also a PB.

“Conditions were great. Why go abroad when you get weather like this,” Hayley laughed, perfectly summing up what every winner said after their wins. The weather, calm and warm, was perfect for producing superb performances. Bedford has rarely been better. “I came here knowing I was in good shape and I wanted to improve on Manchester where I was in lane eight and didn’t really run as I knew I could. I knew I had more to give, but to be honest, I don’t really remember how the race unfolded, I just went for it!” 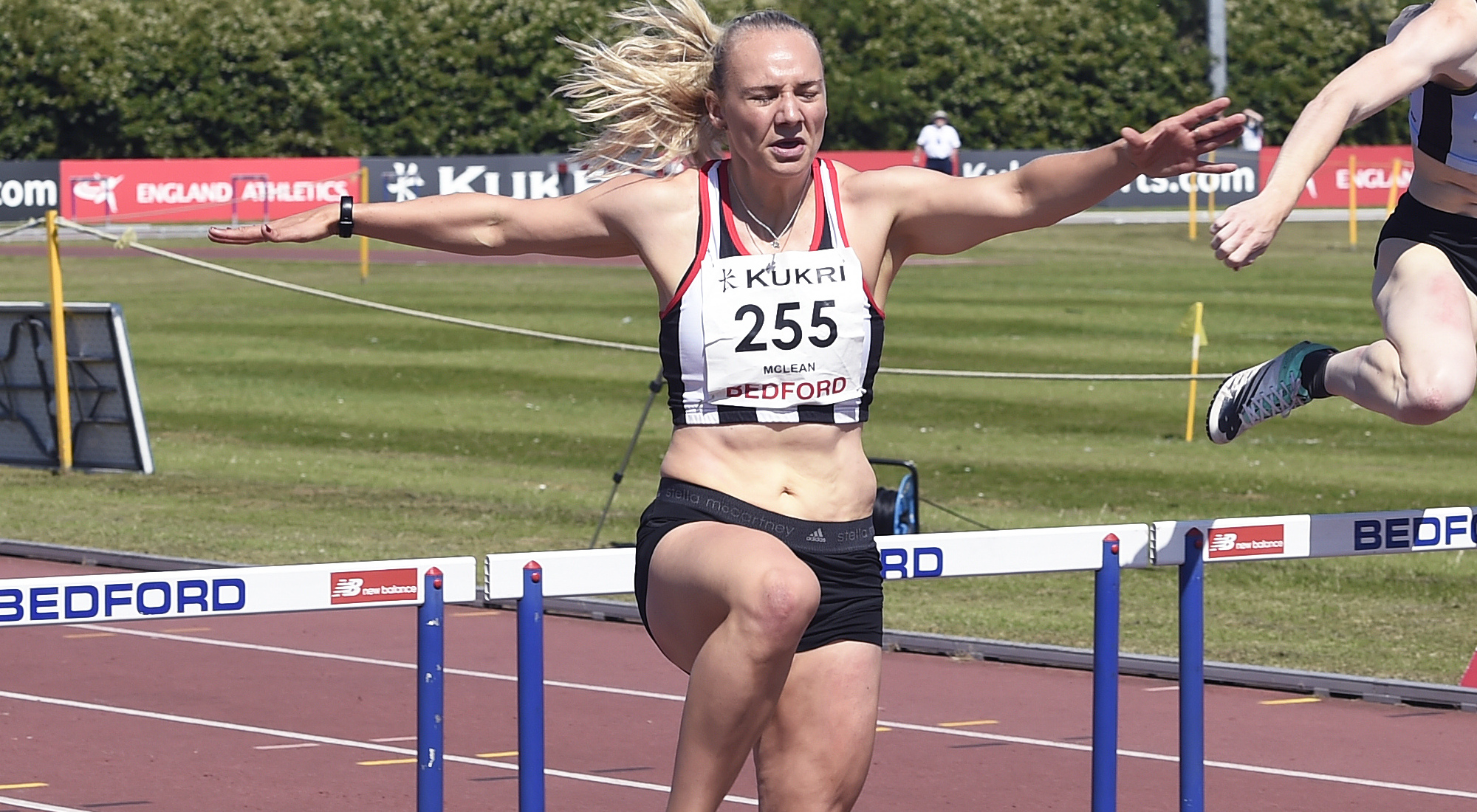 The very next race – the men’s 400m hurdles – was every bit as impressive, although Chris McAlister (TVH, Marina Armstrong) was clearly in no mood for leaving it so late. He too went for it. Fast starting, he eased away on the top bend for a superb 49.75, a time that understandably had him punching the air with delight. “I didn’t expect that,” he said afterwards “I didn’t feel that good beforehand, but in the race itself I felt nice and strong and relaxed and was really happy to power through.” Next on the agenda is a couple of weeks of training before the late season Diamond Leagues, and of course the Manchester International.

There was barely time to draw breath as this truly action-packed day stayed true to a Super Sunday billing as Jessica Mayho (Birchfield Harriers, John Pearson) finally found her rhythm in the hammer after fouling her first two attempts. In round four she let rip, the hammer touching down at 67.76. “I didn’t make it easy for myself,” she laughed. “But it showed strength of character and it only takes one throw,” she added, revealing that like many throwers this season she has struggled with technique given the restrictions earlier this year but felt that after her marginal foul in the second round it would all click into place.

And the brilliant performances kept on coming as next up was Morgan Lake (Windsor Slough Eton & Hounslow, Fuzz Caan) in the women’s high jump. Most of the Olympic team have headed to Tokyo via the holding camp but Morgan loves this championship and felt it fitted in perfectly with her Olympic preparation. “I’m off to Tokyo tomorrow (Monday) and it was nice to compete today,” she said, admitting she got her timing slightly wrong when it came to clearing a big height – she took gold with 1.86m. “I didn’t enter the competition for what felt like two hours, so I need to get that right. All in all it was a bit frustrating, but better to get it out of the way here,” she concluded. 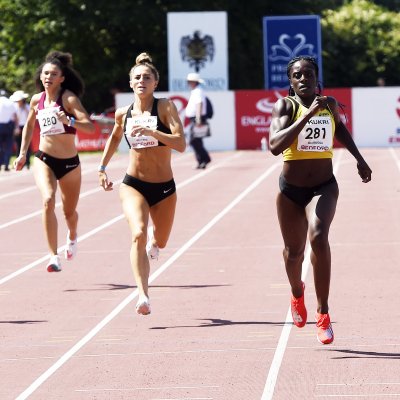 Back on the track Victoria Ohuruogu (Newham and Essex Beagles) cut through the field and by 200m was well on her way to gold in the women’s 400m. She held it together magnificently in the final 100m to clock a massive PB of 52.37, looking for all the world like there’s a touch more to come. In just about an exact copy, the men’s 400m, the very next event on the track, saw Efekemo Okoro (Birchfield Harriers, Tony Hadley) take the gold in 46.40 after a powerful opening 200m gave him the lead. Given his 46.21 semi from the night before, a home straight where he held his form superbly, and 46.35 form going into this championship, the world of sub 46 could be just a few races away.

Similarly, you can’t help but be impressed with Ellie Simpson’s (Sheffield & Dearne, Jessica Davidson) cadence in the women’s Race Running 200m. She hit top speed by 50m and held it together supremely to win in 38.29, a massive personal best as she added the longer sprint title to the 100m she won on Saturday. “I didn’t expect to run that fast,” she said, understandably pleased with her time which elevates her to No.2 in the world and within striking distance of the fastest time of 37.6.

Alexander Farquharson (Coventry Godiva, Andy Vincent) was also in the best form of his life as his fifth round 7.83 not only won him the gold in the men’s long jump, it was a 5cm PB. “Double champion!” he proudly said afterwards. “I won at the British Champs in Manchester, but it didn’t quite go right there, but my coach and I knew there was more to come,” he continued, adding that yes, he’s pleased with the new numbers but watch out, there’s more yet!

Other winners who caught the eye were Toby Harries (Brighton Phoenix, David Sadkin) who clocked 20.82 in the men’s 200m while Hannah Brier (Swansea, Matt Elias) saved her best form for when it counts to take the women’s 200m in 23.62. Nick Percy (Shaftesbury Barnet, Zane Duquemin) produced a solid, consistent series in the men’s discus highlighted by a 60.94 throw. Alicia Barrett (Trafford, Benke Blomkvist) clipped the final hurdle in the women’s 100m hurdles but was a comfortable winner in 13.26, retaining her title (won in 2019). And finally, Miguel Perera (Harrow, Laura Turner-Alleyne) won the men’s 110m hurdles in 13.94 with a magnificent lean and post finish line somersault just to make sure, ending a fabulous return to national championships in a suitably memorable way.

Thanks to everyone involved from the ground staff and security to the new team of Covid safety officers to the amazing crew of officials, happy to be back in action – just like the athletes!