Like a favourite TV show back after a season off air, so the England Athletics National Championships returned complete with drama, old favourites and a host of new cast members to pick up the story.

This is the day 1 report; click for day 2 report

As is traditional for day one, the real drama came in the 100m. In the men’s race a series of swift heats, followed by the next episode – faster semis, led by a former footballer Eugene Amo-Dadzi (Woodford Green Essex Ladies, Steve Fudge) running 10.21 – had the audience guessing as to how the storyline would unfold. In the end, it was Andrew Robertson (Sale Harriers Manchester) who nicked the final in 10.20 with the last stride of the race to win by just 0.004 from Amo-Dadzi, who was also given 10.20 – nothing like keeping the suspense going. He added the gold to the one he took in 2018.

For Robertson it was confirmation of the favourite’s tag he carried into the race, but someone new on the scene was most definitely the women’s winner. In an equally close fought women’s 100m, it was Nia Wedderburn-Goodison (Harrow, Andre Wiliams) who produced the form of her life to take the title in 11.69 by 0.04sec. She added this gold to the one she won at the U20 champs last month, remarkable indeed given she’s still in the U17 age group. “I just concentrated on running my own race,” she said, modestly adding that she had been training for a while for this one as she started when she was just five years old! It certainly promises much for the future and watch this space for more from this smooth, long striding sprinter. 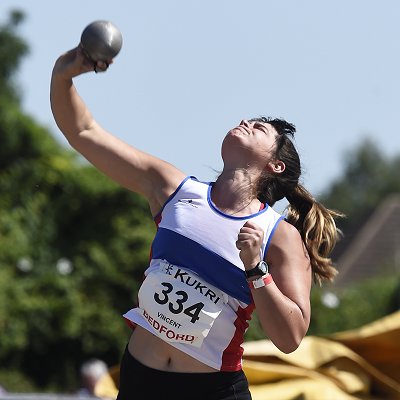 The women’s shot put was very much about the win rather than the distance for Serena Vincent (City of Portsmouth, Bronwin Carter). “I’m really pleased with my first ever senior title,” confirmed the winner of multiple age group golds, “But the distance (15.28) was a bit down on what I hoped.” That said, Serena has struggled slightly this past winter with a niggle but her season’s best of 15.90 compared to a lifetime mark of 16.10 suggests she’s returning to the kind of form that has seen her ranked No.1 in Europe for her age.

Tokyo-bound Sabrina Fortune (Deeside, Ian Robinson) took the ambulant women’s shot with 13.86 after an equally tough winter, albeit for different reasons. Hers involved throwing in a freezing cold park rather than enjoying her usual indoor, and therefore, heated training venues. “But it’s gone very well in 2021 and now it’s just five weeks to go,” she said, excited with her win. “We’re heading to a holding camp and then the actual final is at 7pm on August 29th,” she continued, very much focused on what is to come.

Also in great shape is Craig Murch (Birchfield Harriers, Lorraine Shaw), who has now won the men’s hammer title three times in a row thanks to his 72.94. “It’s amazing to win. I love doing these championships,” he said, adding equal praise for the UK coaching staff who have helped him through what has been a tricky season for everyone. “I didn’t really start throwing again until January because of the restrictions and I had thrown a PB with the 5kg [hammer] before that, so I’d say I’m just now returning to form,” he said, continuing a story line for the day: it’s good to be back but there’s more in the tank.

Proving just that was Shadine Duquemin (Shaftesbury Barnet, Zane Duquemin) who improved from 56.08 to 56.32 to win the women’s discus, happy with her win despite a few technique issues that she ironed out as the competition went on.

While in the race running 100m, Ellie Simpson (Sheffield & Dearne) also rediscovered her best form as she clocked a runaway 19.24 to return to No.2 in the world, a spot she had held but lost earlier this season. “I’m pleased with that,” she said, “especially as training this year has been a bit hit and miss.” Not only has Ellie had to contend with closed facilities, she’s also had technical issues with her bike, making training close to impossible at times this winter. But she’s found form at the right moment and can now look forward to the Cerebral Palsy Champs in September.

But taking centre stage in the fantastically deep in strength IPC competition, where a host of Tokyo-bound athletes were fine tuning their form, was Jonnie Peacock (Charnwood, Michael Khmel) and Zac Shaw (Cleethorpes, Leon Baptise) both of whom looked magnificent in their heats of the ambulant men’s 100m. It was Shaw who just took the actual race (although both are different categories) in 11.07, good running in the tricky cross wind. For Shaw that meant third on the podium after the points had been totalled up, while Peacock took the actual gold. Sophie Hahn (Charnwood, Leon Baptiste) had looked equally powerful on TV on Tuesday to win at the Diamond League in Gateshead, but like the men’s event, her finish time was a little slower than current form suggests thanks in part to that wind as she won easily with 13.02. 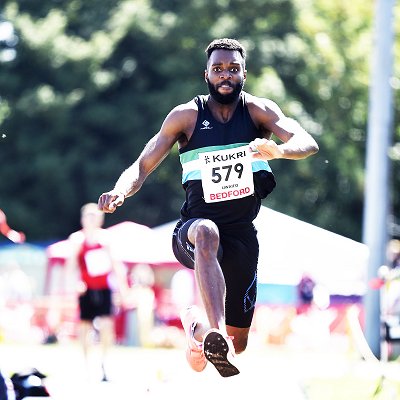 In an event full of plot twists, the lead changed hands on several occasions in the men’s triple jump, but in the end it was Efe Uwaifo (Harrow, John Herbert) who finally took charge of this competition in the fifth round with a 15.86 before stretching out to 16.03 with his final jump, comparing favourably to his lifetime best of 16.20.

In a carbon copy competition, two impressive final rounds of 6.46 and 6.50 secured the national title for Jahisha Thomas (Blackheath & Bromley) in the women’s long jump. Clearly, she loves this venue as she has won the Southern Champs and the Bedford International Games on the very same runway.

True, Bedford’s notorious heavy cross winds can keep distances down slightly in field and so that proved in the men’s javelin. However, Joe Harris (Manx) was happy with his 68.28, which on first inspection looks a little sub-par but was in actual fact a good solid throw given the early conditions. “I’m really pleased to have won and I can’t thank Isle of Man Sports Aid enough for helping me over the past five years,” he said.

Day two promises to be fabulous so make sure you tune in at 10:45 for more track and field action.