A championship best performance in the women’s hammer provided the headlines. Though as ever with national titles on the line, it was all about the gold medal — not to mention the £500 training grant that accompanied that rostrum-topping performance. Great tactics, superb race strategies and big final round efforts provided some superb competition. It proved that the sport is moving in the right direction in terms of training, performances, coaching and everything else that is associated with a great meeting. Thanks go, of course, to the officials, volunteers and everybody who helped make this such a memorable weekend.

The day kicked off in style with what many regarded as the premier events on what was an action-packed timetable – the men’s and women’s 400m hurdles.

And they both lived up to that billing. Nothing separated the first three in the women’s race through 200 metres before Hayley McLean (coach: Chris Zah, club: Shaftesbury Barnet) eased away on the top bend, holding on to her lead to win in 56.22. This was one of her fastest times ever and perfect preparation for the European Championships in a few weeks’ time. It also marked a welcome return to form for Ese Okoro (Birchfield) who ran 57.25, her fastest time for eight years.

“I think of myself as a slow starter,” said Mclean, drawn in lane six, “so it was all about executing my own race plan. And today I felt surprisingly okay into that last straight. I think the wind helped,” she said.

The men’s race was equally as exciting as Jacob Paul (Marina Armstrong, Windsor Slough Eton and Hounslow) outmuscled his rivals in the final straight after a blistering opening 200 resulted in one or two contenders running out of power in the final 50 metres. Paul’s time was 50.64, but he said after executing a perfect race plan:

“Championships are all about winning. You always want to run a fast time, but today was all about the title.”

Alicia Barrett (Benke Blomqvist, Trafford) certainly loves the Bedford track. Back in 2017 she ran the U20 British record of 13.07 (still her legal best) but now she has moved to another level with an albeit slightly windy 12.90w (+2.6) victory in the women’s 100m hurdles. “I guess this is my favourite track,” she said, “but it is annoying as well as it always seems to be slightly windy here!” For Barrett it’s been a slightly frustrating year — training has been going well but until today nothing has quite clicked — so she was more than happy with her victory.

A string of sub 21-second semis (four in total) hinted that the men’s 200 final would produce fireworks and so it proved as Tom Somers (Lloyd Cowan, Newham and Essex Beagles) flew to 20.55w (+3.6), the first four inside 21 seconds again. 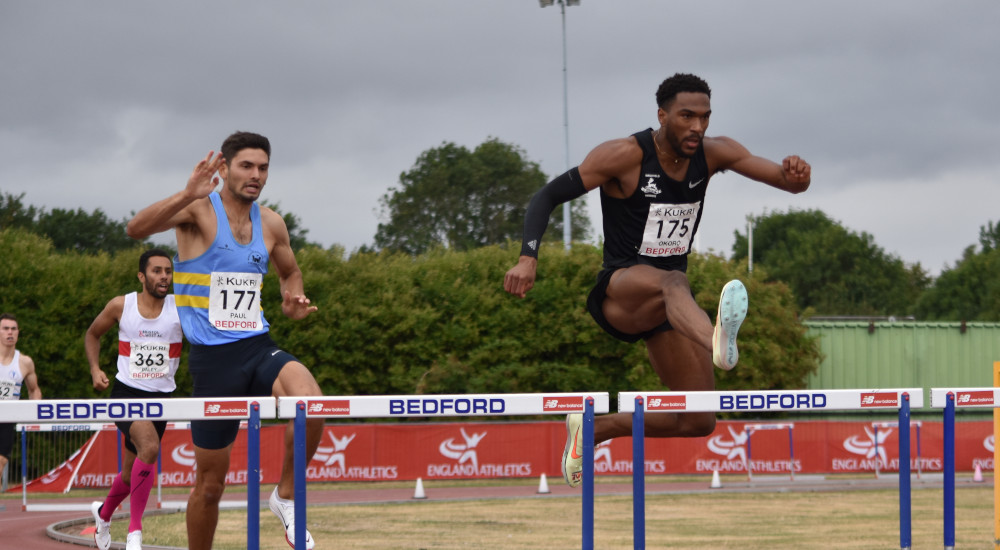 The 400ms were all about the final 100 metres. Jess Turner (Nick Dakin, Amber Valley and Erewash) can rightly claim that final straight was pretty much perfect as she came from far back to take it on the line in 53.45. Energy management of the highest order. Meanwhile, in the men’s race Jamal Rhoden-Stevens (Donovan Reid, Shaftesbury Barnet) had been faster in the heats and semis but still ran out a comfortable winner in 46.79.

Middle distance action invariably results in tactical races at events like this. For instance, the women’s 800m was won by Steph Driscoll (Stephen Carroll, Liverpool) in 2:07.65 with a 62.8 last while the men’s race was similarly cagey, Australia’s Joe Lunn crossing the line first in 1:50.86 to add to the U20 race victory he enjoyed a few weeks’ ago in Bedford. Benjamin Murphy (Mark Hookway, Tonbridge) in second with 1:51.25 took the English title.

Similarly, it was all about the last lap in the men’s and women’s 1500m. Khanisa Mhlanga (Herts Phoenix) produced a great final 60 metres to overhaul Australia’s Jaylah Hancock-Cameron to win in 4:20.65. In the men’s Joshua Trigwell (John Bicourt, Belgrave) crossed the line in second behind Australian Matthew Hussey in 3:51.93 with a 56-high last lap and was awarded the England title.

The women’s hammer provided an enthralling competition as Katy Head (Paul Head, Newham and Essex Beagles) took an early lead and went into the final three throws with a marginal lead 65.95 over European Championships-bound Charlotte Payne (Paul Dickenson, Reading) who had a third-round effort of 65.37.

Payne eased into the lead with 66.10 with her fourth-round throw before a massive 69.19 ­- a Championships Best Performance – secured her the gold. “My training and competition have been all about getting my confidence up,” said an overjoyed Payne, the winner of the U23 title at the same venue just a few weeks ago. Payne, sporting lucky The Simpsons socks (“yes, I do wash them”) explained that she really went for it and it was a case of “if you get it right, it flies”. Fortunately, the hammer did just that. As a deaf athlete it’s all about getting the balance right which in turn can mean her performances do appear inconsistent. As this huge throw indicates, she’s making superb progress to iron that problem out.

Inconsistency was down to an all-together different problem in the men’s long jump. As is so often the case, the hugely varying windspeed that often troubles competitors in Bedford resulted in some run-up issues that meant it took a while for the competition to really get going. But once he got it all under control, a final round jump of 7.58 from Jacob Fincham-Dukes (Zevilie Pukstiene, Leeds City) proved good enough for the gold medal. It’s far below his season’s best of 8.45w back in April in the USA but a good leap nonetheless. “That jump in Texas was actually the second best by a Briton all time in any conditions, but it also resulted in me injuring my ankle,” said Fincham-Dukes. “It just popped on landing and I’ve been working on it ever since,” he continued, pleased to be re-discovering form before the European Championships. He said, “I jumped 7.96 in Ireland last week, so this is good to build on that form.” 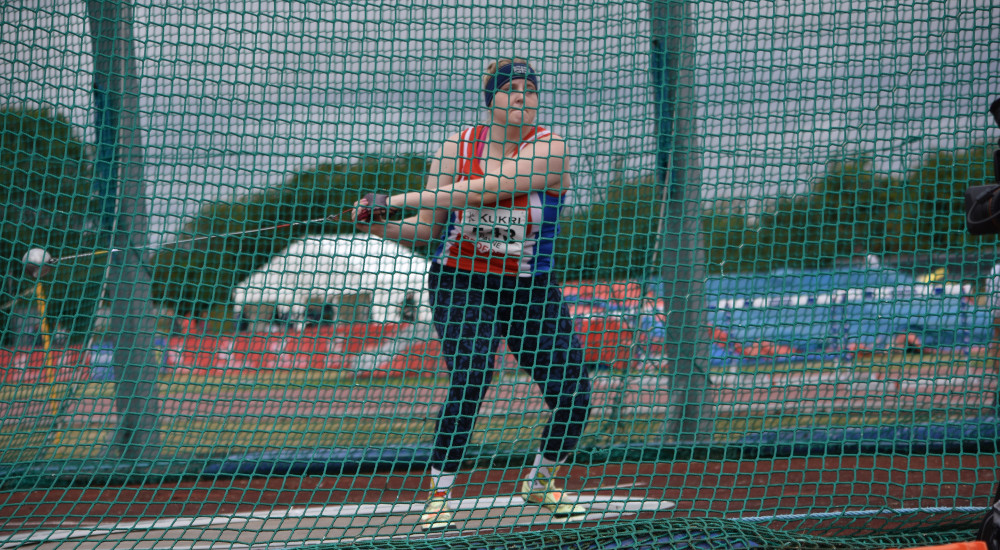 The busy timetable reduced entries in some events, but with national titles on the line, plenty went home happy with their performances despite the lower competition numbers. Among the notable performances was the ambulant women’s long jump, in what was one of the most hotly contested events of the day. The gold medal went to T38 Madeline Down (Dominic McNeillis, Halesowen) who opened up with 4.42. On the track, Jamie Edwards (Jenny Archer, Weir Archer Academy) won the wheelchair 200m in 31.24, while the frame running races went to RR3 Charlie Denman (Robert Purcell, Gloucester) in 41.68 and RR2 Thomas Talbot (Philip Fleetwood, Lincoln Wellington) in 49.67. T44 Bebe Jackson (Michelle Dawson, Harlow) was more than happy with her ambulant 200m win in 30.44 — good running in the blustery Bedford wind.