Waiting in the wings

Almost as a subliminal reminder to the England team members about to compete in the Commonwealth Games in the next few days, the nation’s best athletes made their way to Bedford keen to show everybody we have a new generation ready and raring to go. Athletes in the U23 age group stepped up to take national titles, while younger new-to-the-top-level competitors made sure the selectors knew what they’re all about. This championship is always about making a mark and that’s exactly how day one unfolded.

The winner of the men’s 100m is always about the athlete who handles the pressure the most — all self-inflicted in this instance as less than 0.1 covered the first four or five athletes. The favourite’s tag – and its associated expectation – fell to Louie Hinchcliffe (Paul Hohn, City of Sheffield and Dearne) who had improved from 10.47 to 10.30 in the heats before a windy (+3.8) 10.19. But only marginally and this was by no means a done deal as David Morgan-Harrison (Alex O’Gorman, Kingston upon Hull) looked mighty easy with his 10.31 as did Eugene Amo-Dadzie (Steve Fudge, Woodford Green with Essex Ladies) who was even quicker in the next race up – 10.18 (although he was a non-starter in the final). Throw in Nicholas Walsh (Sale) and his 10.22 into the mix, not to mention Oliver Bromby (Southampton) who ran 10.25 in his semi and you had a very hot final to look forward to.

And it didn’t disappoint. What a tight race! The winning time flashed up as 10.32 before an agonising wait confirmed it was Hinchcliffe who had won from Bromby by the smallest of margins, 0.02sec. He’d gone from 52nd ranked to England champion in what was a memorable three races for the Sheffield athlete. Walsh was third in a not too distant 10.37.

The women’s 100 was all about the start as Rachel Miller (Steve Fudge, TVH) powered out of the blocks and was never headed as she flew to 11.57 (+0.2), her best championships run for a couple of seasons and her first ever national title. “At least I think it was,” she laughed, trying to recall if she had won any more in a career that has seen her compete at the very highest level. For instance, she has represented GB at the Euro Indoors but a back injury that winter and then the past few years and all that has involved meant she lost her focus slightly. “Now, it’s like I’m starting afresh,” she said.

“Today was a day for digging deep and getting something in the bag.”

As is so often the case at events like this, the longest race of the day, the men’s 5000m was all about who could run the final lap the fastest. That honour fell to Daniel Bebbington (Helen Clitheroe, Blackburn) who used his superior sub 1:50 800m speed to take the title in 14:46.49. However, the women were keen to make sure the 3000m steeplechase wouldn’t be described like that as Maisie Grice (Bud Baldaro, Aldershot, Farnham and District) hit the front early in attempt to run the legs off her fellow competitors. She has run just inside 10:05 this season but had to be content with 10:28.04 on this occasion, to defend her title. Sam Costly (Southampton) adopted exactly the same tactics in the men’s race to front run his way to 9:09.45. 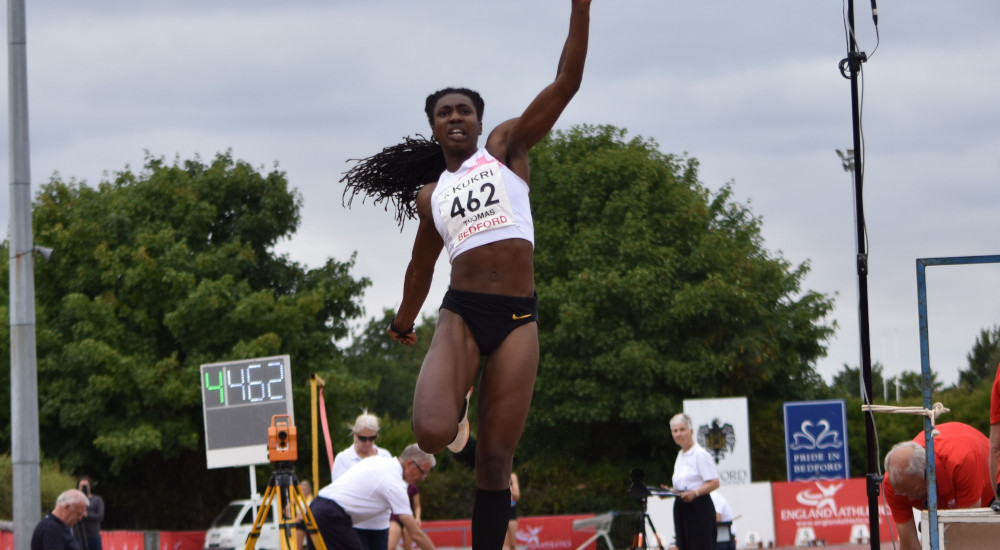 On cloud nine after being selected for the European Championships barely 24 hours earlier, and tapping into the energy that exciting news provided, Jahisha Thomas (John Shepherd, Blackheath and Bromley) won the women’s long jump with a final round 6.54 to round off a series that included 6.49 and 6.51. “That is just a glimmer of what is to come,” she said, super excited to have finally “connected lots of things.” She’s been working hard, but until this meeting had been struggling to get things to click. Just at the right moment that has changed and it’s now a case of watch this space.

Emerging from a similar lull in form is Ben Hawkes (Adrian Palmer, Blackheath and Bromley) in the men’s hammer. Winner of the U23 title last year, he added the senior title to his collection. His three valid throws saw him improve from an early 65.67 in round one, to 67.65 in the third before a final round effort of 68.34 secured him the gold medal. Now he’s now looking to 70 metres and beyond. “I’m really happy with my competition,” he said. “And it was nice to return to longer throws after being in a bit of a lull,” he added, confirming he will indeed be targeting that elusive 70-metre mark later this season at an U23 England throws competition.

Similarly consistent, but “annoyingly so,” she laughed, was Serena Vincent (Bronwin Carter, City of Portsmouth) who threw 16.03 twice to win the women’s shot. “I wanted it that bit more,” she added, happy to have won a national title but equally her training has suggested there is much more to come. “Throwing is going really well right now,” she concluded, keen to improve on her 16.36 best. Phoebe Dawson (Mark Chapman, Bournemouth) was also in the groove with three throws over 50m, her final round effort of 52.04 comfortably further than any of her competitors.

The men’s triple jump was also about late round marks, Jude Bright-Davies (David Johnson, TVH) hitting 15.93 in the fifth round to win his first senior England title (he was the U20 champion indoors and out back in 2018).

Highlights included the men’s frame running 100 which saw Rafi Solailman (Philip Fleetwood, Charnwood) – an RR3 athlete – power to a season’s best of 17.63. It was a great return to form for the European Champion following a bout of COVID. Solailman, who has a PB of 17.16 said:

“It’s great to be here competing against my friends and opponents.”

He now hopes to target the CP Sports at Coventry for his next race.

A handful of Paralympic champions used the event to test their form in what is a down year for many. Jonathan Broom-Edwards (F44, Graham Ravenscroft, Newham and Essex Beagles) the winner in Tokyo, cleared a season’s best of 2.02 in the men’s high jump while Welsh athlete Sabrina Fortune (F20, Ian Robinson, Deeside), the gold medallist back in 2016 in Rio used the event to build on her strength. Following an early morning wake-up in the women’s event won by Serena Vincent she returned to win with 13.12 despite dropping the shot on her hand!