The latest and final venue for the Birmingham 2022 Commonwealth Games has been confirmed today, with Victoria Square in Birmingham city centre revealed as the official finish area for the Marathon which will be held on Saturday 30 July 2022.

The square will be a welcome sight for the finishers in all four races that will be held on the first Saturday of the Games, with the men’s marathon, women’s marathon and the men’s and women’s T53/T54 events all taking place on the same course which will start at Smithfield, another Birmingham city centre venue that has previously been announced as the home of beach volleyball and basketball 3×3 and wheelchair basketball 3×3 during the Games.

“We are thrilled to be unveiling our final venue for the Games and it is fitting that Victoria Square has been chosen as the finish area for the Marathon, as it is located right in the heart of the host city for Birmingham 2022. Publishing these details with nine months still to go until the Games begin also means that local residents, businesses and other organisations have plenty of time to make plans for when these one-day events are staged in their local area.”

The course for the marathon is split into two distinct sections – a southern loop which the athletes must complete twice, followed by a shorter city centre section which will showcase some of Birmingham’s best loved landmarks to millions of TV viewers, as the runners pass Centenary Square, the Jewellery Quarter, St Paul’s Square and St Phillips’s Cathedral, before crossing the finish line in Victoria Square. 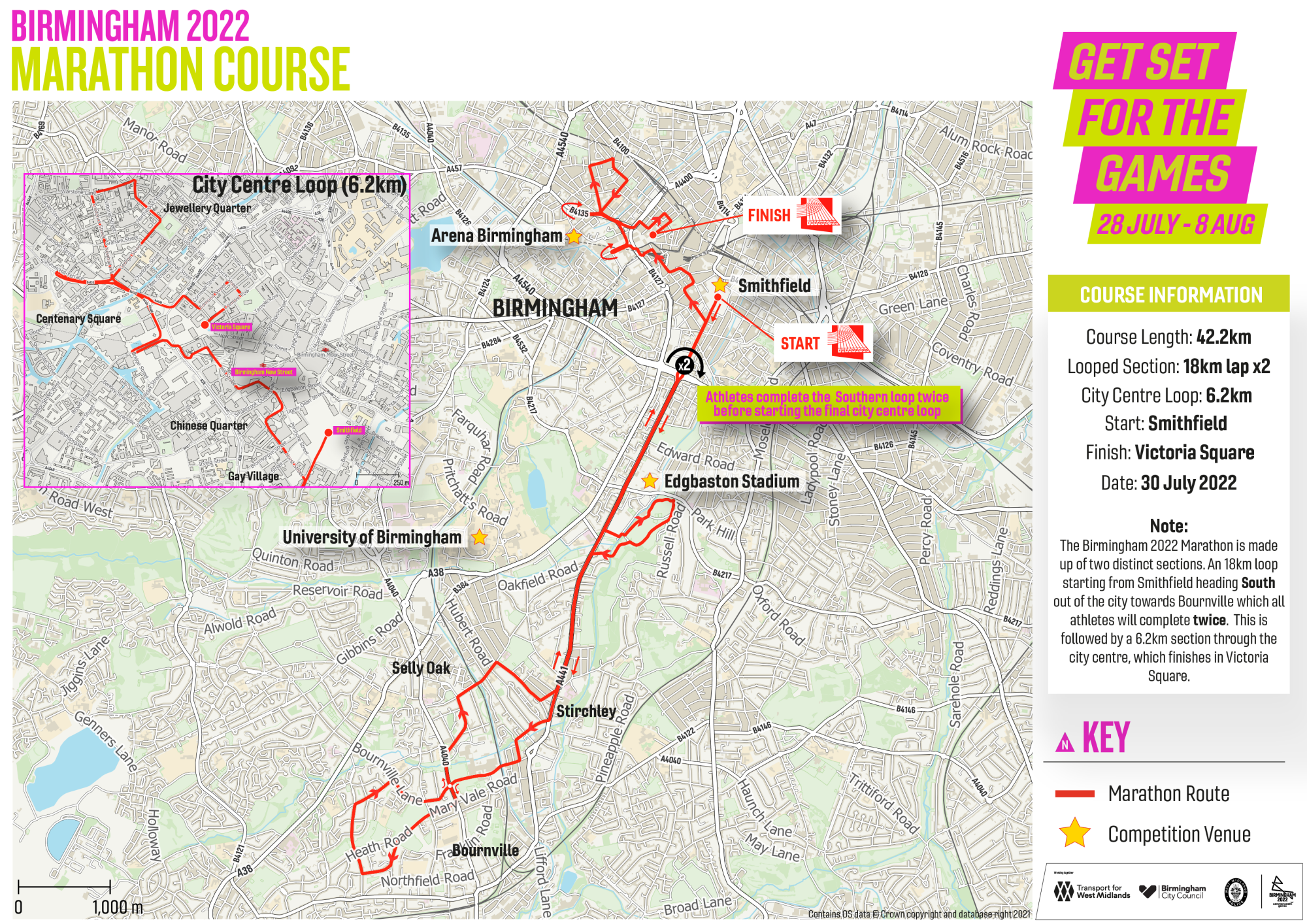 Birmingham based marathon runner, Hayley Carruthers, who is part of England Athletics’ Birmingham Talent Hub and is targeting selection for the Birmingham 2022 Commonwealth Games, said:

“The course for the Birmingham 2022 Commonwealth Games marathon looks great and it is exciting to find out the exact roads I’ll be running on if I get selected for next summer’s event. I’m very familiar with parts of the route having taken part in the Great Birmingham Run and the course goes past lots of Birmingham landmarks, so it is a good way to showcase the city.

“It would be fantastic to be selected to represent Team England at a home games, and I’ll be working harder than ever over the next few months to ensure that I am on that start line in Smithfield in nine months’ time.”

“Road events are free-to-view from many locations, and in the case of the Marathon and Triathlon and Para Triathlon, are bringing the sporting action to the neighbourhoods of hundreds of thousands of Birmingham residents. As a Proud Host City they also provide us with a fantastic promotional tool to show off many of our districts and landmarks to a global audience, which is an invaluable opportunity we are ready to embrace.”

Full course descriptions and course maps are available now at birmingham2022.com where frequently asked questions for each of the events have also been added, to provide local residents and businesses with as much information as possible. Community engagement teams from all of the local partners for each event are also now reaching out to people in each local area, to share all of the information that is currently available.