The England Athletics Regional Volunteer Awards kicked off for 2022 with the West Midlands Regional awards evening. Deserving volunteers from across the region came together at the Stratford Sports Club to recognise achievements this year. Also in attendance was England Athletics Head of Talent Sarah Benson, members of the regional council – who decided on the final winners from all the nominations received, and interviewed all winners throughout the evening – and special guest Luke Gunn. The three time Commonwealth Games steeplechaser and now Head of Athletics at the University of Birmingham, one of the England Athletics Talent Hubs, led the proceedings of the evening.

Luke said, “volunteering is the genuine experience, and the next generation are still doing this but we just have to guide them to volunteer for the sport.”Counciller Martin Flowers summarised the evening by saying, “Be good role models, use your awards to motivate and inspire others, to make them want to do what you do.” 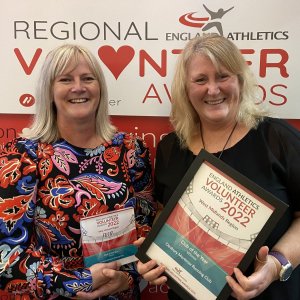 A welcoming, friendly and inclusive club with excellent coaches and almost 200 members who all support each other in training, at parkrun and at races. They work with the local ‘compassionate communities’ group and have welcomed members who need company as well as regular exercise, plus local families who have Ukrainians residing with them, as well as winning the school fete tug of war and parading on Remembrance Day. Members include a number of CiRF, LiRF, Level 3 Endurance coaches, 2 welfare officers and 3 mental health champions with regular beginner courses supported by WhatsApp and a booking app. There is a weekly run and talk session which finishes at our local community hub with coffee and cake. Regular runners have completed ultras, and placed well in 10k and the Birmingham Half marathon.

Club of The Year – runner up: Sneyd Striders

A happy, inclusive and diverse club with abilities across the whole running spectrum who interact well together and who have embraced England Athletics guidance and completed Club Standards. The club has a very active and imaginative committee who work hard to ensure members have a great experience. The club has a great relationship with Walsall Council – part of the Queen’s Baton Relay to encourage new runners – and volunteering at the C25k course blends into a steady flow of new members. A very successful annual Pudding Run raises the profile of the Sneyd Striders, plus Plogging in a local park and supporting the Local Samarathon initiative. 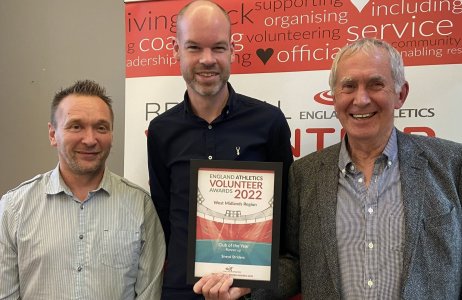 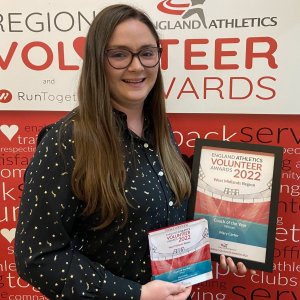 Junior Head Coach Mary has delivered a new weekly training programme and a very successful summer camp initiative and encouraged many youngsters back into athletics, including making special efforts for autistic youngsters. She has introduced a funetics session, and end of term QuadKids competition and is developing the U15 multi-event group. plus enabled a clear pathway for older children by liaising with Event Group coaches at the club. She supports and develops the Club’s youth athletes by getting them onto Assistant Coach courses to give them the self-confidence to deliver training plans to their younger peers.  Mary Carter has developed herself by attending the National Youth Development conference.

Coach of The Year – runner up: Keith Morant 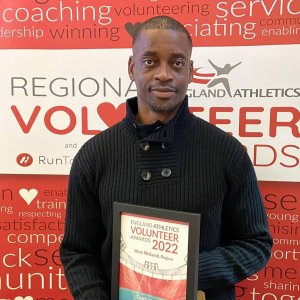 Keith’s unique style of coaching gets the best out of these young people and the development of them as athletes and sensible young people is palpable. His depth of knowledge regarding sprint, long jump and triple jump coaching has culminated in 2 English Schools’ Championships medals. He is very aware of the needs of teenagers and how they need support and stimulation that they can relate to, such as funky music being played during warm ups. He also encourages his athletes with their leadership skills. His nominator says, “Keith is a special and outstanding coach.” 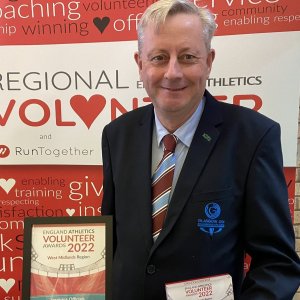 Chief Starter’s Assistant at the Birmingham Diamond League and at the 2022 Commonwealth Games, a long serving committee member of the Midlands Technical Officials Group, Chair of the West Midlands Regional Council, and deputy Chair of Birchfield Harriers! Stuart officiates at all levels of athletics meetings across the country – and will take on any role within the meeting so that the meeting is able to take place. He is organised, knowledgeable and approachable.  He creates opportunities for developing officials, and supports them by sharing good practices and offering tips of the trade. Stuart embraces new technology within the sport and is keen for others to do the same. 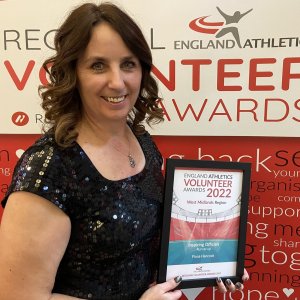 Fiona has grown into an excellent official from starting out on a field officials’ course in 2012 to the being a Field Judge Commonwealth Games in 2022. She has supported new officials starting out and is currently mentor to a young official who officiated at the Commonwealth Games and attended the European Championships in Munich. She is an excellent role model and respected by her fellow officials. She is knowledgeable and experienced, and very calm and assured under pressure situations. She has all the attributes commitment likeability, good communicator, excellent management and inter personal skills, enthusiastic knowledgeable can do attitude with attention to detail in her work respected by her fellow officials. Fiona Hancock is highly thought of by all who know and work with her. 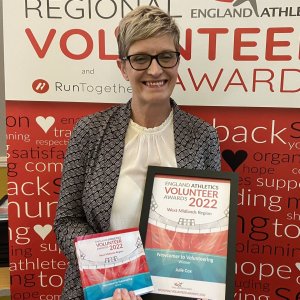 Julie joined the Sneyd Striders committee as Club Social Member to make a change for all members.  She is a determined and effective individual and a robust team player. Her planning and execution of events include a club outing to Bath for the Twin Tunnels race, away days, Club Presentation evening, Post Christmas Party, and the Club AGM. She is also a newly qualified Run Leader and members who join her Chatty Chasers group really enjoy it and keep coming back for more! Julie Cox’s enthusiasm and friendly approach rubs off on members and the club is visibly a happy place to be with her around. 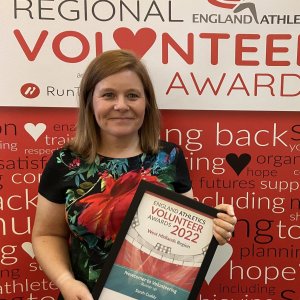 Sarah leads runs supporting the Malvern Buzzards Take Flight C25K programme. She stepped up to be club captain for 2022 and introduced a captain’s champion competition based around parkrun and licensed races. She personally delivers a ‘well done card from the captain’ to those who have done a race or achieved a goal such as a particular distance in training or PB. She helps people out even when busy, is proactive and versatile.  This has benefitted everyone in the club by building a sense of pride amongst the members who see their achievements recognised in print or online – as she regularly writes press reports too! You would not think Sarah had only started volunteering last year. She is a role model for us all.” 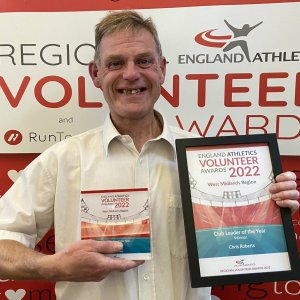 Chairperson of the Club, a newly qualified Run Leader volunteer and also the club’s weekly newsletter editor at the club, Chris lives and breathes Sneyd Striders, leading from the front. During COVID, the committee, through his leadership came up with ideas to keep members safe whilst engaged in running activities and having some individual and team challenges. He has taken ideas from training he has attended, from his committee and produced a Members’ Handbook. He got his committee on board to ensure each volunteer is qualified to carry out the role they are responsible for – all part of becoming fully compliant with England Athletics Club Standards. The impact of this has seen a marked change in attitude across the club as members feel valued and accepted.

Club Leader of the year – runner up: Jackie Acton 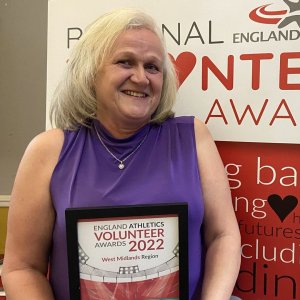 Club treasurer, kit secretary, level 2 field official, sign in desk on club nights, provider of refreshments at meetings, and fundamental in seeking funding opportunities and applying for grants, Jackie has also been instrumental in encouraging parents and grandparents to get involved in officiating. She ordered and arranged the construction of a summer house, getting power supplied and donations of equipment like a refrigerator and a hot water boiler. This summerhouse is now a focal point at the track. Jackie Acton is a vital member of Burton AC. 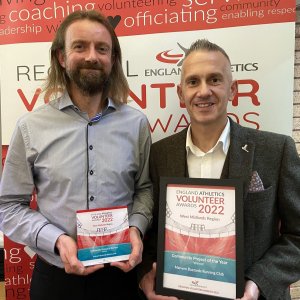 More than 100 runners were involved in the 24 Hour Relay Race for Ukraine in March and over £7,000.00 was raised in 24 hours. This club also had local venues advertising the event and left collection pots for them to use as well.”

Unlike all the other Couch to 5ks in the area ‘Take Flight – Couch to 5k’ is a free programme and based in a part of Malvern which has a higher demographic of minimum wage and those on benefits.  It has been a very positive impact on the community and has helped people see that they can get out in the fresh air and get fit without it costing money. 7 LiRF leaders helped Simeon Foreman and runners from the Buzzards came along to support.  For the final week‘s 5k every runner was partnered with a Malvern Buzzard runner to help and support them on their 5k.  This project gave people who couldn’t afford to join a club or couldn’t afford the usual Couch to 5k fee to have a go at running.

Run Leader Simone’s son George is neurodiverse and suffers with sensory overload.  George decided he would like to run to raise money for the ADHD Foundation Umbrella Project – installation of coloured umbrellas into schools alongside neurodiversity resources and training for teachers. Simone and George raised £350 for George’s own school then continued with ‘Roarsome’ miles – a one mile running challenge which was extended into fun RunTogether group challenges. The support received has been amazing and they have surpassed their original fundraising target to install the Umbrella Project in George’s school and have now been able to gift the project to another 7 schools. Simone collected the award during the event, but George is pictured “being a Celebrity” at home! 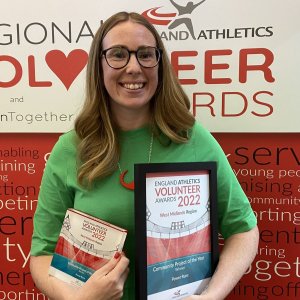 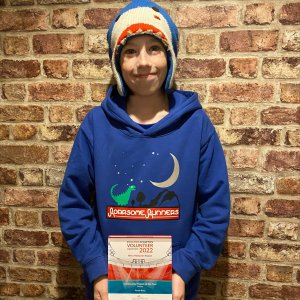 Coventry Godiva Harriers Interim Chair, Officials Coordinator, Club House Manager amongst many others beyond the club Stewart has been actively involved in athletics for nearly 60 years, starting off as an athlete – and after retiring from competition he continued with officiating at all levels of the sport. He ventured into athletics administration as Hon. Treasurer of Warwickshire County AA before taking in the same role with the Midland Counties. In 2019 he became the Chair and also Chaired the West Midlands Regional Council. He currently Chairs the UKA Education and Training of Officials for Track and Field. He understands that our sport is and will continue to change and he embraces this change and the challenges that come with it. Stewart Barnes himself said that he hopes to be an effective bridge between the past, the present and the future and as such he seeks out the views of others.

Robert’s contribution to Solihull & Small Heath AC is immeasurable. His talent and dedication as a coach are evident in the progress and commitment of the athletes he works with. As a committee member and Club Chairman, he has steered the club through significant changes to facilities and administrative systems over many years.  His has long been involved in the Midland Counties AA, providing support to ensure leagues continue to flourish. Rob sets an incredible example of passion, dedication and commitment to those of us who are fortunate enough to volunteer alongside him.

Andy has been involved in athletics for over 20 years.  He is a Level 4 Field Judge has worked at all levels of competition up to being the Technical Operations Manager at the Birmingham 2022 Commonwealth Games.  He has been Competition Secretary for the Midland Counties AA, a committee member of the Midlands Officials Association (MAFEO) and a member of the organizing committee for the English Schools’ AA Championships. He is incredibly supportive in developing new and less experienced officials and is always ready and willing to share advice and knowledge. He also shares the resources that has acquired and developed and has become a trailblazer in the use of technology to run athletics meetings more efficiently for the officials, athletes, and spectators. Andrew has had an immense impact on Midlands athletics. 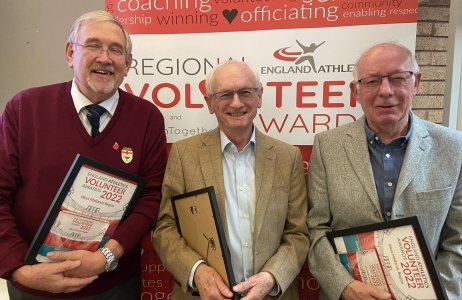