Greats of athletics inducted into Hall of Fame for 2021

During a star-studded evening on Saturday, eight new inductees were welcomed into the England Athletics Hall of Fame for 2021.

Among the names being celebrated for their incredible dedication, passion and services to athletics were Olympic, World, European and Commonwealth Champions spanning five decades. In addition David Weir was announced as the England Athletics Athlete of the Decade 2010-2019.

It was a truly special evening at the Hilton Metropole at the NEC in Birmingham as the event also saw the National Volunteer Award winners from 2020 being honoured on stage for their outstanding work as coaches, officials, and leaders across the sport’s grassroots.

Greg said: “I am very humbled and honoured to receive this award. When I was a kid, no one expected me to be the one to succeed. I was the kid making up the numbers, but I had the determination to follow it through. There was always something going wrong [injuries]. I had to keep this core people around me to keep me going. I genuinely believed I could do it and that’s the thing – you have to have that self-belief.”

Paul sadly passed away in 2020. His grandson Rob received the award on his behalf along with members of his family. Rob said: “My grandad was a fantastic man. He’d be really proud of this trophy and I’m really proud too.”

Over her 30 years with UK Athletics, Cherry played a central role in successfully bidding for and hosting 22 global athletics events. She was presented with her Inductino trophy by Paula Dunn (also pictured).

Asked about her proudest moment in the sport, Cherry said: “Probably 2017 (in her role as Managing Director for the 2017 World Para Championships and World Athletics Championships in London), although it nearly killed me! I never got a medal as an athlete, but we got the record for most tickets sold! I’m also very proud of Hero the Hedgehog (the official mascot for the 2017 Championships)!”

Sprint hurdler who won gold at the 1998 Commonwealth Games and was a key member of his country’s 4x100m relay team.

Whilst collecting his award, Tony paid tribute to his great rival on the track Colin Jackson, who he said was often the driving force behind his determination to succeed. “I thought it was good to be competing at the same time as Colin,” he said. “If Colin wasn’t there, I wouldn’t have run the times I did. I just used to think ‘I want to be where he is’”.

Lloyd sadly passed away in 2021. Collecting his award on behalf of his father was Lloyd’s son, Dwayne, who said: “The amount of messages I got when he (Lloyd) passed from people saying how he helped them. It’s hard. He would help every single person. He was the person everyone liked to be around. He was always helping others.”

400m European Indoor Champion and 4x400m Commonwealth gold medal winner who went on to manage the GB team in the 1990s.

Verona said: “I loved every minute of it (being an athlete) and those moments will never come again. To all those youngsters out there, I would say make the most of it.” When asked what her magic moment was, she added: “Getting picked for your first Olympics and that’s fantastic – then the first time you win a medal. So many memorable moments.”

International sprinter with a career spanning 13 years, including record equalling 60m gold at the 2004 World Indoor Championships and gold in the 4x100m men’s relay team at the 2004 Athens Olympics.

Speaking about comparing his Olympic title to his many individual medals and his journey through the sport, Jason said: “Each one of them is so special. I was introduced to athletics at school sports day – when I crossed that finish line it felt amazing, and it inspired me. My club was a great part of my journey. Athletics continues to give and give, and well-done England Athletics for recognising and celebrating people’s successes and sometimes I don’t think we do enough of that.”

Britain’s top female long jumper from the mid-1960s to the early 1970s who won Commonwealth gold and Olympic silver.

Unfortunately, Sheila wasn’t able to collect her award on the evening but will be given her award by England Athletics in person. 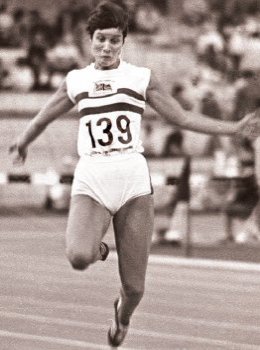 All photos (except top stage image) by Mark Shearman