Regional Council Chair Jane Pidgeon led the evening and said, “It was great to be able to present the awards face to face after 2 years of online presentations.” It cerainly was a great chance for the stalwarts, volunteers and staff at England Athletics to catch up. Indeed, a regional council member added, “The best part of England Athletics is that you know everyone.” 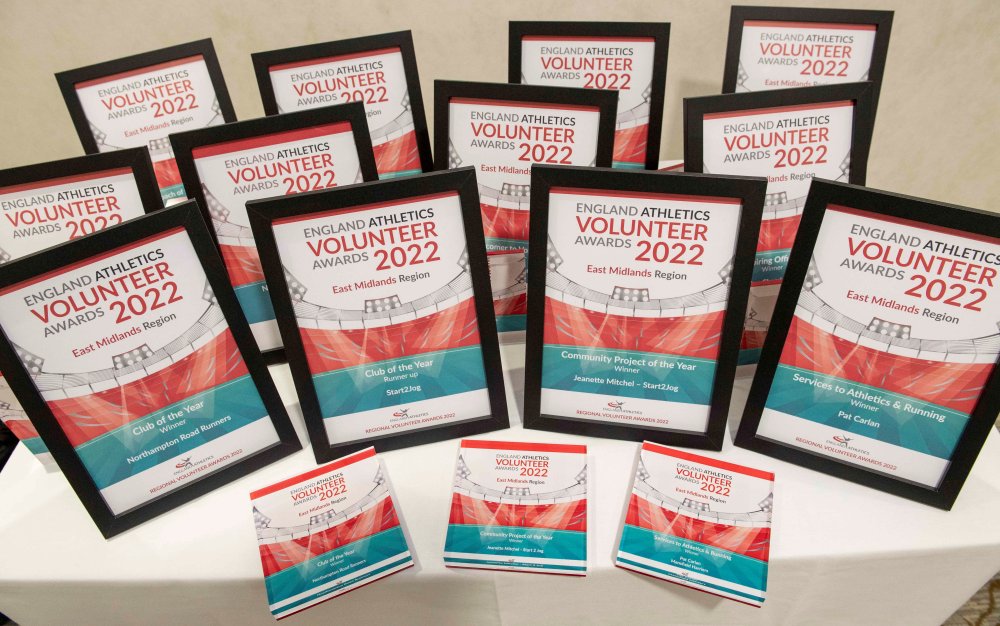 Northampton Road Runners are a club with an all inclusive and open approach to allowing members to really enjoy their running in a safe and encouraging environment. Encouragement to achieve an individual’s own running goals and participating in challenges are the most important aspects of the club’s ethos, and there are monthly awards and recognition for members who have achieved and/or supported others.

Meeting at the state-of-the-art university facilities, there is access to sports science professionals offering strength and conditioning, and physiotherapy and members using the services are already showing benefits.

Members of Northampton Road Runners are huge supporters of parkrun and the club has built relationships with event organisers of local races and securing discounts on entry fees to encourage more members to run. The club has also collaborated with other sports clubs including cricket and basketball.

• What makes you special?
“So collective, everyone gets involved, there is something for everyone, all inclusive”
“Modern day clubs need to be more approachable”

Club of The Year – runner up: Start2Jog

Joining a club maybe a bit daunting, but Start2Jog ensures new members are welcomed with messages from the Chairman and Membership Secretary, and are met before their first session by one of the coaching team. There is also an active social media presence people get a feel for the club

A versatile and high quality coaching team allows high quality sessions to be delivered – over fifty training plans have been developed for members in the past year. This covers everything from parkrun to ultra on road, trail, fell, track, or grass – and the club supports advanced, intermediate and improver groups, with a Couch25k, monthly track session, fortnightly spin classes, winter cross country sessions and a monthly 3 mile walk and talk session which ends up at a pub. Recently a junior section has been set up.

Start2Jog are like one big running family rather than a club. 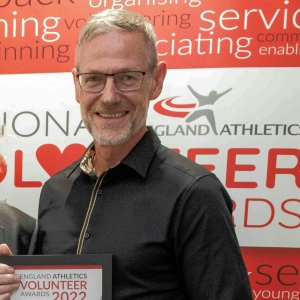 Martin White has established a coaching structure to proactively support the progression and development of speed athletes. In 2019 he was alone in coaching 6 athletes and supporting a junior coach with a group of 12. He now oversees sessions of over 60 members. He has increased capacity by recruiting new volunteer coaches and mentoring the other coaches. He has signposted several athletes towards other coaches and events where he thinks the athlete will benefit.

His sessions are innovative and include use of modern technology and resistance aids He maintains training diaries of all sessions which he reflects on to make changes/ improve; his methodical nature complements the forensic and enthusiastic methods deployed in his sessions. Martin’s commitment to athletics and development of sprints cannot be questioned.

In answer to the question, “How do you get parents to give their time for free?” he said that they should remember that for some athletes it will be a great part of their life even if they are not going to be an elite athlete”

Coach of The Year – runner up: Philip Fleetwood

A dedicated Level 4 coach, Philip Fleetwood supports athletes with disabilities across the region, coaching a range of disciplines from wheelchair racing to FrameRunning. In the past year he has arranged face to face training with athletes at various locations and offered video guidance on strength and conditioning training.

He has a light hearted approach to coaching by putting his athletes at ease with jokes and making sure they are at the centre of his sessions. He makes sure there is a variety of training methods and activities for FrameRunners and wheelchair racers – and integrates both into his sessions safely.

He has supported the development of new coaching resources – including new resources for FrameRunning to enable the discipline to grow – helped athletes with anxiety, competition nerves, and exam. His style of coaching is athlete centred as well as collaborative and developmental.

All his athletes respect him and values everything he does. Philip is a truly special coach. 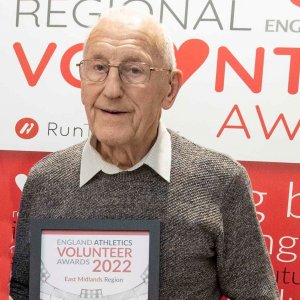 Derbyshire legend Ernie Cripps has given nearly 70 years to the sport: many committee roles for club and county, officiating at most Derby Athletic Club matches, and ever-present at club nights doing much needed. As the club’s Officials’ Secretary Ernie has been a key person ensuring that meetings have the necessary officials to cover all events. His words of advice are, “I’ve enjoyed it. If you enjoy it you will keep coming back.”

Ernie is a pillar of experience and wisdom, ever reliable, always someone to be counted on and always willing to take on a role to make sure things happen – a truly remarkable person. 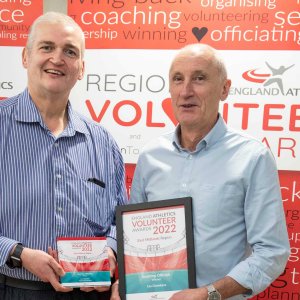 Les Chambers volunteers as an official at all Nottinghamshire track and field, and cross country. In the last year he has also getting Berry Hill track ready for competitions; cutting grass, re-painting lines, checking equipment, weeding.

He encourages and supports others to get involved and expand their experience, including guiding parents and coaches through Level 1, and makes time at competitions for all interested to get some officiating experience. One of his greatest assets is the ability to set aside his ego in order to let someone else gain skills from leading an event. Les is the perfect official, calm, fair and exact.  He calmly and clearly gives instructions, putting nervous competitors at ease with a joke or two.  He does meticulous preparation and planning if Referee or Technical Manager.

He told us after his presentation what he really enjoyed about officiating was it was fun. “Fellow officials are a good laugh, and i appreciate the athletes thanking me.” 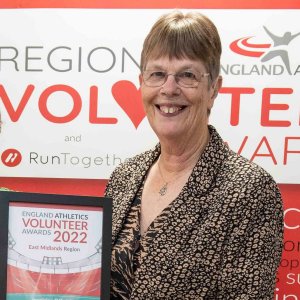 Lynda Plumpton is an inspiring official first volunteered to help out 10 years ago despite never having been associated with a club. She used to be an athlete, then taught PE at and “when I went to the London Olympics I saw signs saying ‘have you thought about being an official’. Having retired 6 months earlier I thought I would give it a go.” She’s now a National level official and volunteered at the Commonwealth Games this year as she wasn’t selected to officiate.

Lynda has an ability to welcome and include everyone regardless of level of experience, age or the frequency that they turn up. She is particularly brilliant at supporting younger officials – making them feel part of the team equal to all of their adult counterparts.  She has a ready supply of sweets, and always makes sure officials that have children or relatives competing have time to watch.

If Lynda is involved, then the event will be well organised, supported and most importantly fun – she is fully aware that a many officiate for the social aspect as well as supporting athletes. 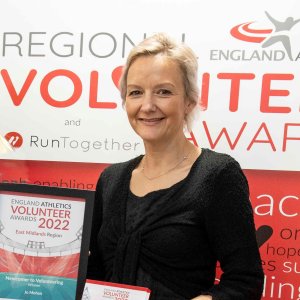 Adfter being persuaded to do a couch to 5km and then got addicted, Jo Mohan has been instrumental in setting up the junior section within her club. She identified that in the local area, running or other sports provision outside of school was lacking. She liaised with other coaches to deliver structured sessions to the juniors. The club now have a junior club section with dedicated sessions, their own kit, a club championship, and Cross Country.

She told us during the evening that she did not want the kids to miss to miss out on 30years that she didn’t do. Jo’s love of running – she’s nowan active runner from parkrun to marathon – and her approachability are her biggest attributes. She plans sessions meticulously and her approach to delivery is informative and inclusive.

The impact of what she has been instrumental in creating is already big, but has the potential to be profound. 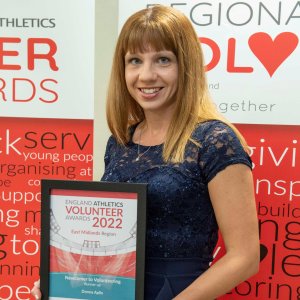 Volunteer Donna Alpin has undertaken the Coaching Assistant course this year supporting the club’s growing number of young sprinters. She is also working towards being qualified as a Level 1 Field Judge. She has embraced her officiating role with gusto (as well as lowering the average age of officials!!!).

A former sprinter who returned to the sport when her children joined the club, she has technical knowledge of sprinting and an understanding of body mechanics which she is able to transfer to athletes. As a mother she is aware of the nuances of working with teenagers!

Donna’s reliability, attending coaching sessions and fixtures regularly ensures that Mansfield Harriers has been able to grow its volunteering capacity – she has recently encouraged 3 other parents to also volunteer – accepting more new members and providing qualified officials at matches. She told us, “Athletics has been a constant and always kept me happy.” 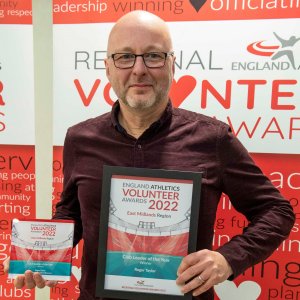 As a member of the committee for a number of years, Roger Taylor took on the chairman role with a vision of growing the club, not only in membership but in inclusivity. He assembled a team of committee members which included new and long-term and created each role a definition. This has spread the load across the core team but has also encouraged more non-committee members to become involved. He also rebalanced the male/female quota of committee members – leading to a bigger focus on the safety of female runners.

Roger has displayed excellent leadership skills -drawing out committee member strengths to help them thrive and increase their confidence. All this from initially joining to lose weight!

At his presentation, Roger was asked how he inspires others to volunteer. He replied that the club have got to the point where we have created our own buzz.” 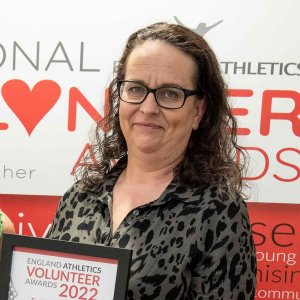 Start2Jog’s members run all routes in and around the Glossopdale area, including trails and hills.  Whilst there are of course safety precautions, unforeseen circumstances we may need to call upon the services of Glossop Mountain Rescue Team – luckily we have not had to do this! However this is the chosen annual charity for Start2Jog. And our nominee helps to organise this.

To raise funds, members volunteered at the Manchester Marathon and a number of Run North West Races.  Jeanette Mitchell organised a teddy tombola, plant stall and arranged the children’s races at the summer fair, 3 club social events a year, an on line virtual car boot sale, and arranges for club members to join GMRT taking Santa and his sleigh around the streets! 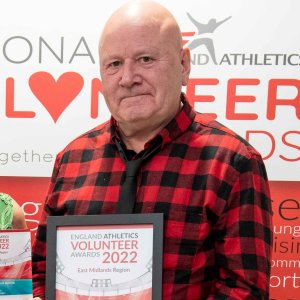 Pat Carlan came to athletics in the 1980’s and started to coach youngsters at a council run Saturday morning session at the local track. He represented England Masters at both cross country and road. After successful treatment for cancer Pat took up coaching seriously and has now been coaching for over 30 years and delivers two sessions each week at the club.

Cross country is Pat’s passion and he has combined this to become involved with race organisation, officiating and administration at both local and national level. As race director or committee member, his organisational skills, enthusiasm, attention to detail and ability to recruit other volunteers has enabled Pat to be the lead organiser of many successful cross country events.

His stewardship as Mansfield Harriers Chair Pat Carlan has been instrumental in the resurgence of the club and return of neglected and derelict track facilities (unused since the club was evicted in 2012) to TrackMark accreditation and back in use 6 days a week. He said that his highlights so far within eathletics are the club coming back to Berry Hill, and being president of the ECCA and MCAA.