England Athletics are sad to report the death of Basil Heatley, Olympic marathon medallist. Basil passed away in the early hours of Saturday.

Basil was inducted into the England Athletics Hall of Fame in 2015 and presented with his award by Dave Moorcroft. Two years later he returned to present steeplechaser and fellow 1964 Olympian Maurice Herriott with his induction award. 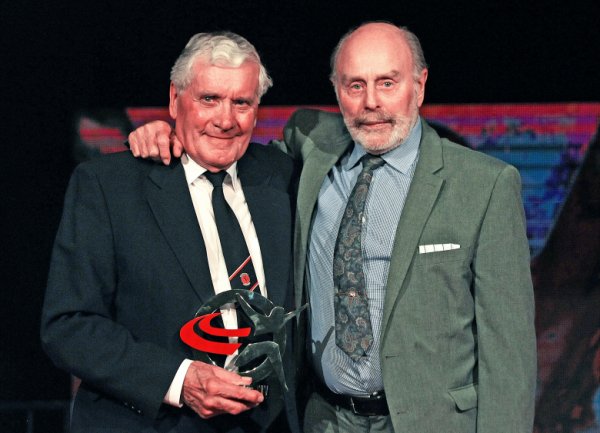 Below we reproduce his Hall of Fame testimonial:

Basil Heatley was inspired as a 14 year-old by reading  about the 1948 Olympics and, in particular, Emil Zátopek. Little did he think that one day he would break one of the Czech’s world records!

He joined Coventry Godiva Harriers at the end of 1950 and gained his first important success a few months later when he placed third in the English National Youth Cross Country Championship. Five years later, in 1956, he made his marathon debut but it was not until 1963 that he would start to make his mark at the distance which would prove to be his forte.

Meanwhile, he won the English cross country title  – a hugely prestigious achievement in those days – in 1960, 1961 and 1963, and finished first in the International Cross Country Championship (forerunner of the present World Championship) in 1961, winning by a huge 23 sec margin. A high class track runner also, his greatest performance on cinders came in the 1961 AAA 10 miles championship at Hurlingham when he knocked 25 sec off his hero Zátopek’s world record with a time of 47:47.0.

His return to the marathon in 1963 was promising. Just a few days before the AAA marathon he clocked his fastest ever 3 miles time of 13:22.8, ranking him second in Britain, and then proceeded to finish second to clubmate Brian Kilby in 2:19:56. Later that season the Essex-based American, Buddy Edelen (holder of the world record with 2:14:28), commented: “If Heatley put in some long runs and trained for the marathon seriously I’m sure he could run under 2:15.” Well, Heatley did … and to such effect that he relieved Edelen of the world record in June 1964! Competing in the Polytechnic Marathon on the celebrated Windsor to Chiswick course, he passed Ron Hill for the lead shortly before 20 miles and came home 100 yards ahead in 2:13:55.

Four months later, in Tokyo, Heatley became the fourth Briton (after Sam Ferris 1932, Ernie Harper 1936 and Tom Richards 1948) to earn an Olympic marathon silver medal. Although outclassed by the incredible Ethiopian, Abebe Bikila (who set a world record of 2:12:12), he ran with characteristic determination to prove himself the second best marathoner in the world. Bothered by stitch for much of the race, Heatley was 12th at halfway (“I was totally in despair, thinking that I had blown it”), but worked his way up to third, 75 sec behind Kokichi Tsuburaya, at 40km. Finishing brilliantly, he overtook his Japanese rival on the stadium lap to the consternation of most of the spectators and ensured second place by sprinting the final 200m in an extraordinary 32.3 sec. He had no idea at the time that he had run himself into a medal position! Heatley announced his international retirement after the Games but continued to compete for Godiva for several more years and has remained closely involved with the sport ever since.

Both photos by Mark Shearman – Basil at the London to Brighton relay,
and presenting Maurice Herriott with his Hall of Fame induction award.