Get ready for the indoor season

With the increase in the number of indoor areas available for athletics events, it is becoming much easier for officials to experience a ‘winter season’ which includes field events and sprints rather than the traditional cross country and road running. It never rains at an indoor match (except when the roof leaks)!

Unlike the outdoor summer stadiums, which tend to be fairly similar, if laid out differently, there is quite a variety of indoor event facilities. An official might find themselves at an adapted sports hall – with sandpits, a single straight, and jumping, vaulting and shot put areas, which may or may not all be able to be used at the same time – to a more purpose built indoor arena with similar facilities (such as Eton, Bedford, Kings Lynn, Brunel, Chelmsford, Crawley, Newham, Sutton, Gateshead and Bath) right up to the large arenas with a 6 lane banked 200m track such as Lee Valley, Sheffield, and the NIA – or even a hydraulically operated 200m circuit to adjust the banking, such as the one in Cardiff. 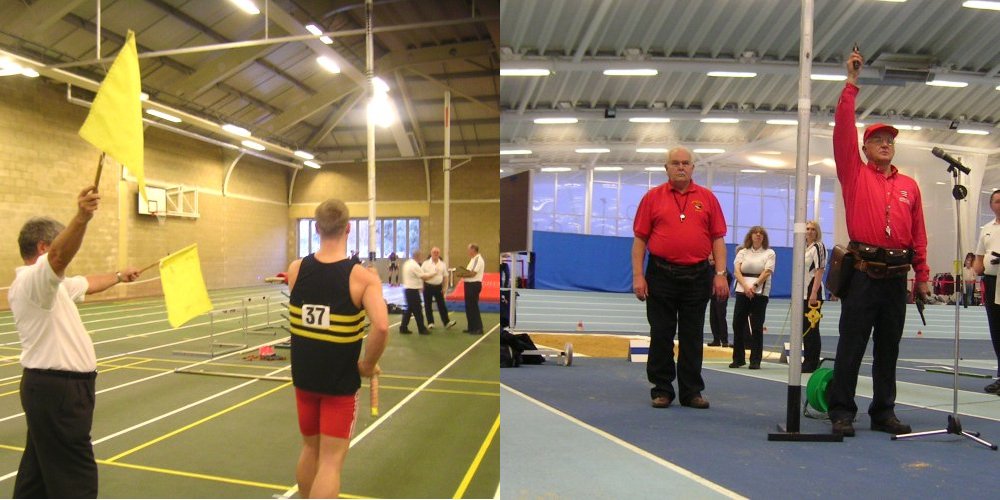 There are some differences in the kinds of officiating that take place too; it’s much more likely that a runway controller is required when events are in a more restricted place, and common to have sprinters, pole vaulters, high jumpers or long / triple jumpers run ups all criss crossing each other and athletes and officials, markers or equipment inadvertantly getting in the way. There can be problems with walls being very close to sector edges – a shot ‘bounce’ off a wall does not count as an implement would off a throws cage! 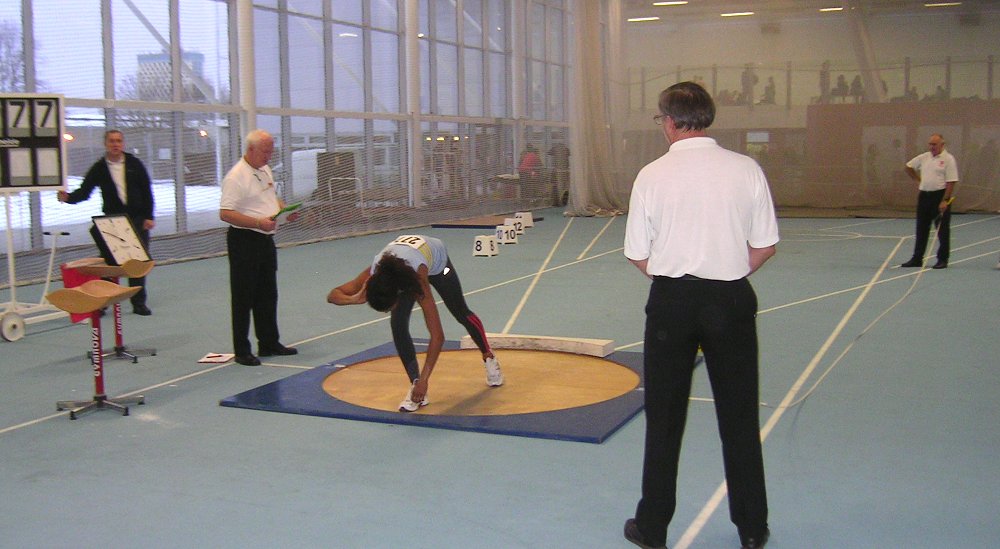 On the track, the distances tend to be shorter with 60m and 60m hurdles popular and at bigger arenas, a circular, banked 200m track. The starter’s team may well have to position themselves at various locations in the infield so close cooperation is required between track and field officials.

The indoor long jump and triple jump are much the same as outdoors, but without the need for a wind gauge, and of course the vertical jumpers never need worry about the wind direction for their jump or vault!

On the field, the long throws are out of the question, and the shot put uses a rubber implement which reduces damage to the floor and dampens motion once landed – shot putters are often requested to liberally chalk their implement so that a mark will be made on landing (an extra job for the indoor event Clerk of the Course is mopping the shot put floor!). Sometimes crash mats are used to line the floor and at major events there may even be a protective netting cage. The circle itself is usually portable.

Vaxjo in Sweden goes one step further with an indoor throws meeting in their giant indoor football warehouse type building. The rubber crumb back turf floor can withstand rubber tipped javelin, discus, shot and weight throw up to about 70 metres. The cage folds back when football takes over and the shorter javelin run up starts in a corridor-like cupboard.

The atmosphere can be a lot noisier, making call up and announcement of results, and instructions from athletes (such as pole vault upright settings) more difficult to hear, starts less settled, and field judges need to be especially alert for starters near their position. At an outdoor event there is often more of a picnic atmosphere as there is lots of room to sprawl on a rug or pitch a small tent. Indoors that’s not possible, although spectators and coaches are much nearer the action too which can make for a greater air of excitement than you would see with equivalent crowd sizes at outdoor events, but at the same time, viewing can be limited with spectators often kept in a small space.

An indoor event is a great way to keep your officiating varied and your skills sharp over the winter season, and one more experience to add to the duty sheet.

Find details of all upcoming Officials’ courses for qualifications and development opportunities.