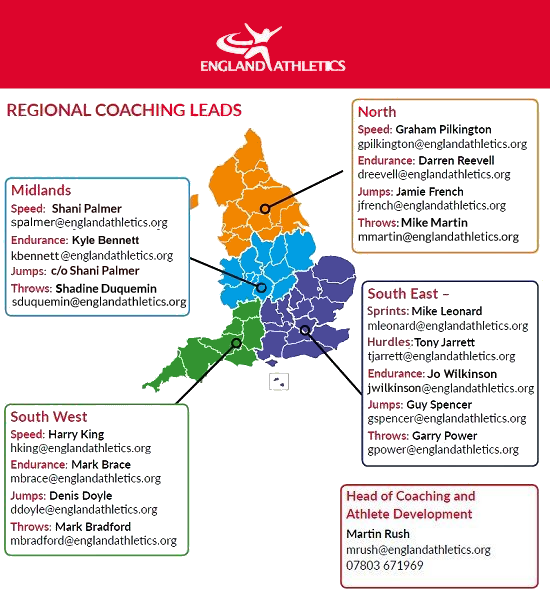 Graham is a Level 4 Performance Speed Coach based at Litherland Sports Park, Merseyside and has over 21 years experience as a coach. As well as coaching his own Squad he undertakes a variety of roles for British and England Athletics. These include International Coach and Team Management, AASE Programme Athlete Mentoring and the Delivery of Movement Skill and Event Integration Days for England Athletics.

Regional Coaching Lead for Endurance (North). Darren has been coaching for over 14 years, working with athletes of all abilities, from beginners through to International athletes. He has been England Team Coach and Team Manager and numerous international events throughout Europe, and is the England Team Manager for the Anglo Celtic Plate 100k. Alongside this he also delivers flying coach visits, tutors England Athletics workshops, and is actively involved in the delivery of the England Athletics Club Run programme.

Jamie French has been a qualified athletics coach for 23 years.  He is an experience coach education tutor and assessor who has helped to shape the current set of Coach Education courses for British and England Athletics.  He predominantly coaches Jumps and Sprints, although has coached a number of international multi-eventers, middle distance athletes and bobsleigh/Skelton.  He has recently coached a number of England and Great Britain International Athletes, and has team managed the England Athletics Jumps squad in an international competition as part of the National Coach Development Programme.  He is a Principal Lecturer at Leeds Beckett University, helping to deliver both the Physical Education and Spots Studies courses.  His research is predominantly in the use of High Intensity Warm Ups (HIWU) to enhance performance and interventions to be used prior to start and in-between rounds of Triple and Long Jump competitions.

Mike has been a throws coach based out of Trafford AC in Greater Manchester for the past 5 years coaching athletes from club level all the way up to National and International level. During that time he has continued his development and now holds the Level 3 Event Group Licence. He has delivered locally for the Regional Coach and Athlete Development days and the Track Nights programme for England Athletics. In 2021, athletes coached by Mike made the finals and won English Schools’ AA as well as making the finals of the National championships at Junior and Senior level in addition to having multiple athletes join the Youth Talent Programme.

Kyle has been coaching for over 15 years, working with athletes of all abilities, from beginners through to International athletes. He is a talent coach mentor on the youth and junior talent programmes mentoring coaches and athletes. Kyle is the lead strength and conditioning coach at Imperial College in London where he runs the performance programme. He is also the head endurance coach for the University of Oxford.

Shadine Duquemin is a discus and shot put coach currently based in Loughborough. She has competed internationally herself in both events and has experience coaching a range of athletes from grass roots to international level. Shadine currently coaches discus for Loughborough University and is now the Discus Lead for the Youth Talent Programme.

A former GB International sprinter and British record holder Harry has been coaching at performance level for over 15 years; with experience gleaned also from a period coaching in professional football.  He has worked full time for UK Athletics as a Performance Coach and headed up the National Relay Programme both coaching and as Relays Manager.  Currently Harry is a Senior Performance Coach at Brunel University, Team Coach for the 2018 Commonwealth Games and newly appointed National Coach Lead for Speed and Relays.

A former Area Coach Mentor South West, he oversees the South West Endurance Network (SWEN). He organised the National Endurance Conference in 2017. He is an England Athletics Team Manager and Movement Skills Tutor.

England Athletics National Coach Mentor for High Jump and North Wales Coach and Athlete Support.  Officer (all events), Denis has coached for over 47 years across all sectors of the sport from grassroots to Olympic level.  His experience also includes serving as a team manager for Great Britain and England and coaching with British, Irish and Indian teams at four Olympics and six World Championships.  He is an IAAF Level 5 Elite Jumps Coach, UKA Level 4 Performance Coach and international lecturer, and has guided over 30 athletes from several nations to international success, five at Olympic level, with ten of them setting national records. Two of his former charges include National Coach ‘Fuzz’ Ahmed and British Athletics Futures Manager Jo Summers and current European junior bronze medallist Tom Gayle.

Established in coaching the javelin throw for over 10 years and recognised as one of the leading javelin coaches in the UK, Mark has a broad base of knowledge and experience that has seen him coach performance at National and International level. He currently coaches the U20 National champion, Tom Hewson (69.13m). Former member of the National Coach Development Programme, Mark excels in his role as a coach mentor contributing to National priorities such as the U17 girls javelin project and regional coach and athlete workshops. Mark is the UK lead for the Finnish Javelin Carnival, annually organising the opportunity for some of the UK’s most promising talent to train and compete in Finland. As a British Weightlifting Association qualified coach, he compliments his event expertise coaching athletes and coaches in strength and conditioning.

Tony is a former Silver Medallist in the 110 metres hurdles at the World Championships in 1993 and 1995; the European Championships in 1990; and Gold Medallist from the 1998 Commonwealth Games.  He is now a top class sprints and hurdles coach based in London.  Tony has coached athletes from English Schools Champions to full GB international level.

Mike is an experienced coach and coaches athletes across a wide range of ages and abilities from club to international. He is a UK Athletics Tutor and from 2013 to 2017 was a National Coach Mentor fro Speed within the NCDP. He is passionate about athletics and enjoys sharing his coaching philosophy and ideas with other coaches.

Jo has been involved in athletics for over 35 years from childhood to senior level as an athlete and coach. She competed at international level on track, road and XC including Commonwealth Games, European Championship and World XC representation and finished in the top 20 in the London Marathon Elite Women’s Race. As an Endurance Event Group Coach she brings all her reflections and experience of being coached by leading GB coaches and competing at a high level to her own coaching. Jo currently coaches predominantly marathon runners with several England Masters Athletes in her group.

Coached horizontal jumps for 20 years, it started when he was asked to look after a promising young triple jumper – “because if you don’t nobody else will”. That young athlete was Tosin Oke, and working with him over two spells has given Guy an insight with what it takes to develop an athlete from their first ever session to an Olympic final. In the ensuing two decades, Guy has been extremely privileged to work with many dedicated and talented young men and women jumpers – with some of his coaching highlights being becoming an inaugural member of the NCDP scheme in 2009, working with 13 athletes who have won medals at a National level, coaching 10 athletes who have triple jumped over 15m – including two over 16m and one over 17m, coaching the National Champions of Nigeria, Jamaica and Botswana.

Garry was part of the National Coach Development Programme.  He has experience coaching individuals from fundamentals through to junior international.  He has been a team coach at World Youth Olympics, European Teams and a European Winter Throws.  Additionally he delivers the Movement Skills & Physical Preparation workshops and Assistant Coach award.

Find a qualification or development opportunity

Support your coaching journey by booking on a qualification or development opportunity through Athletics Hub today.