Reminder of the recent consultation process

It was agreed at the UK Athletics AGM in December that, in accordance with the recommendations of the external Review of UK Athletics (the Street Report), detailed proposals would be formulated to enable formal consultation with the Sport on the future legal membership of UK Athletics, formerly known as the UK Members Council (UKMC), now known as UKA Members (UKAM).

The process was promoted to all club contacts on two occasions, via club support weekly emails, through Regional Councils and England Athletics bi-weekly newsletters.

Two email addresses were also promoted for members or other constituencies to submit alternative options.

Option A: The four HCAFs become the members of UK Athletics, with one vote per each HCAF.

Option B: The four HCAFs become the members of UK Athletics, with votes distributed proportionately based on the number of member clubs within each HCAF. The key voting thresholds here are (i) over 50% to pass an ordinary resolution and (ii) 75% to pass a special resolution.

Option C: Formal membership is the four HCAFs, together with representatives of constituencies that are considered to fall outside the current HCAF membership models.

Option D: All HCAF member clubs to constitute the membership of UK Athletics on a one vote per club basis.

Option E: All individuals within the UK athletics community who are affiliated to the HCAFs, for instance registered athletes, coaches and officials, would become members of UK Athletics.

Click here for a full summary of the information provided to members including the appraisal of five options.

The response from our members

We received 119 completed responses to the options appraisal from affiliated clubs and member bodies. This represents 8% of all members. The results have been analysed in two ways: 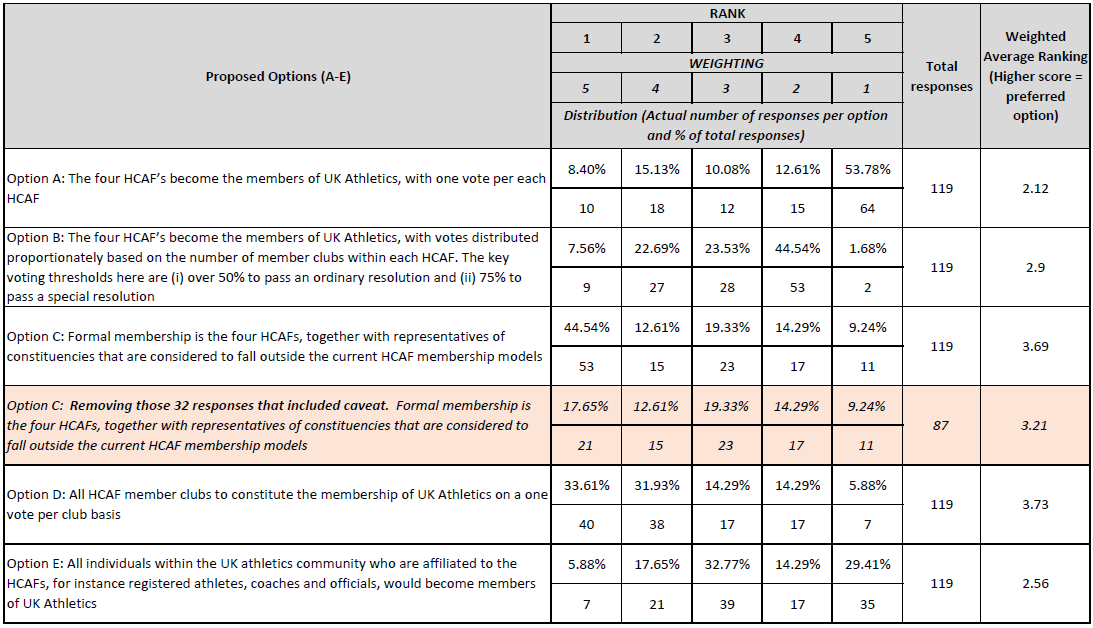 Based on the absolute data and percentages, Option C received the highest absolute number (53/119) and % (44.5%) of selections for RANK 1. Thirty two of the 53 responses provided the following caveat to this choice:

“There should be no HCAFs on the UKAM as it would be a conflict of interest bearing in mind, they are also on the board of UK Athletics. While the HCAFs are represented on the UKA Board, they should have no representation on the new Members Council.”

Based on the weighted average data, Option D is the highest with a score of 3.73 with Option C being the second highest at 3.69 (3.2 with the removal of the 32 responses asking for HCAF removal).

The future proposal will be agreed and communicated via a special general meeting of UKAM during week commencing 21 June with any changes being adopted on 1 July 2021.