The club has approximately 200 members who range in age from 18 to 70 years, with club members competing in a range of events from parkrun to ultra-marathons, the Sussex Cross Country and Road Running leagues. The club is also introducing some track training sessions soon.

The club has found that its women-only environment can help some people feel more comfortable joining ‘a running club’. And aside from training and events the also club arranges a variety of social events, has members volunteering at many events, and holds its own run organised events such as their forthcoming ‘Superwoman’ event with female guest speakers from the running community.

On this occasion 14 members of the committee and coaching team gathered before the training session to meet Myra and Sarah for introductions. Myra took the opportunity to explain her role as Chair of England Athletics as well as the structure of the organisation, and the importance of having women represented throughout the governance structure, on regional councils and upwards. Sarah also explained her role as the Club Support Manager, and explained areas of work she has been involved with lately with clubs. 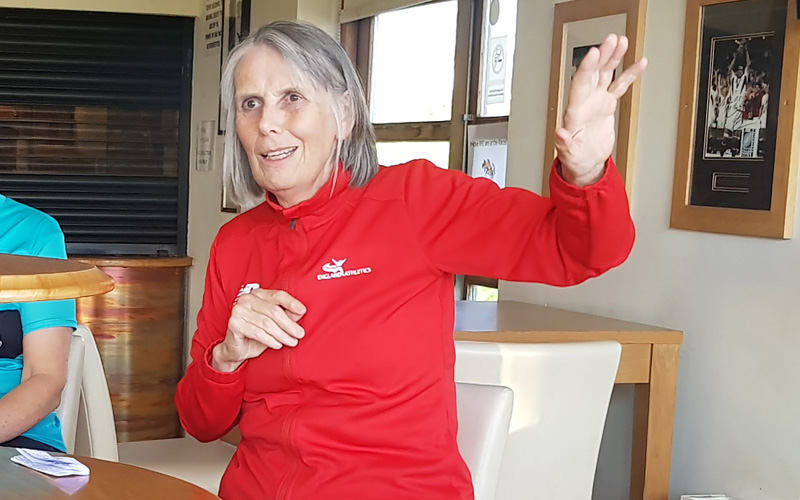 This led on to discussion around other topics including the England Athletics national and regional Volunteer Awards 2019, the make-up and purpose of the regional council since the most recent election process, and Coach education including workshops and the role of feedback from clubs.

Myra and Sarah then enjoyed watching the club in action, as well as taking part themselves. This included a pre-session welcome by the Chair, Naomi Sharp, who welcomed another new runner to the club, celebrated the success of members who had been running in different races the previous weekend, thanked the 40 volunteers who were manning the mile 24 water station at the Brighton Marathon and wished runners competing in both the 10k and marathon distances at this event the best of luck. 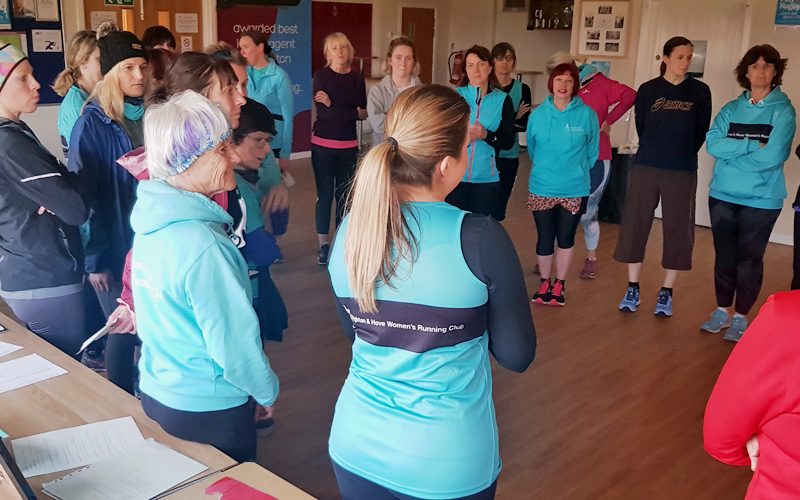 For the evening’s session people were put into groups of seven people, with a qualified leader with each. On this occasion there were about half a dozen groups which were easy to spot as they made their way across to the seafront for the session as most were wearing the club’s distinctive jade green/blue tops. Here there was warm up including a range of drills before interval training was done. The session gave all abilities the opportunity to run at their own challenging pace, to recover as needed, and to complete as many intervals as was suitable for their ability and upcoming races. This was followed by the jog back to the clubhouse and some stretching before a buffet and drink where Myra spoke to the members including about her own experiences of Olympic and Commonwealth Games competition.

This time also gave Myra and Sarah the opportunity to talk further to club members including answering a range of questions and listening to a number of suggestions about possible support, mentoring and training for club volunteers including coaches.