Chris Jones went along to the Hampshire club with Club Support Manager, Sarah Gardiner, to find out more about its current activities and history.

Despite a wet and windy evening more than 300 athletes were in action on the track and surrounding area. There were over 30 coaches involved in delivering the various sessions – which were part of the training activities the club holds each Tuesday and Thursday.

Among the volunteers Chris met were club secretary Stuart Horsewood and Chair Paul Cox and they explained to Chris about the club’s background, current set up and aspirations. The club currently has a membership of more than 900, making it one of the largest in the country. This membership is spread across a range of ages with more than 300 being pre-teen and 348 registered members over the age of 18, including a good number of Masters athletes.

It is unsurprising that the club has a very active road and cross country section across all age groups. It actively participates in the Hampshire and Wessex Leagues with members also heavily involved in parkrun.

The club sees high levels of participation in track and field events and at the junior level. For example, one of the indoor competitions at Lee Valley this winter saw 70 athletes (Under 11 and Under 13) taken to the event in two coaches. It takes part in track and field leagues as well as those for cross country and road. Recently it has joined with Portsmouth to form a joint team for the Upper Youth Development League.

Paul explained that the club has a voluntary Executive Committee of 10, covering all aspects of the organisation, meeting every two months. The waiting lists for the junior sections of the club have reduced significantly as the club has successfully increased its capacity for junior athletes. It is also seeing good retention rates among the younger athletes. As with many clubs, a challenge the club faces is when athletes move on go to university

As already identified the club has a strong group of coaches and helpers. WADAC has placed a focus on getting coaches to share knowledge. It is also bringing in speakers and coaches to increase the knowledge base and help to develop its helpers and coaches.

Paul said, “Internal and external training is key to the development of our coaches and helpers. Succession planning is also a key priority.”

Paul explained the club is looking at what it can do to improving the levels of performance of its athletes and that coaching is a key consideration in that. He explained the junior and female Masters teams have won many county team medals and individual medals and the club’s Under 13 boys have won a national bronze medal in cross country. The club has some very good athletes who are ranked in the top 10 for their age group in track and field. But generally the level of Track and field performance is not quite at the standard of cross country, and the club is looking for more experienced coaches to join and to develop its coaches further. 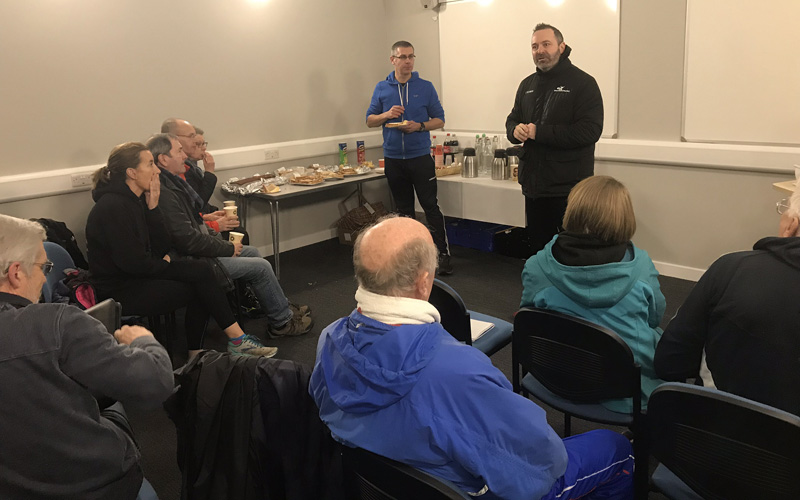 One of the hugely experienced volunteer coaches Chris met was John Millar who was founder member of the club when it was created in 1975. John has coached many hurdlers over the years, worked as National Event coach in the 1990s and coached athletes including Olympian Simone Laidlow. When Mark Rowland moved to steeplechase he was the coach Mark and Alan Storey worked with on his hurdling – leading to Olympic bronze in 1988 and a British record of 8:07.96 which still stands.

The club is based at the university track. The club has a good relationship with the university which is prepared to carry out further investment in the facility and also provides a grant to the club.

As part of the evening Chris also held a Q&A session which was attended by around 30 volunteers from the club.

Chris said, “We arrived at the fantastic setting of the Winchester University track, the home of Winchester and District AC, at around 5pm and left at 8.45pm having watched an action-packed programme of various multi-events based activities for athletes and runners of different ages and aspirations.

“It was quite staggering to watch as many as 350 participants utilising the track and surrounding space during the evening and the spirit amongst both athletes and volunteer coaches and leaders in the club on what was a chilly and wet night, was clearly evident.

“It was a pleasure to be there as a guest of Winchester & District and I wish them all the best with their future endeavours under the leadership of Paul Cox as they build on their established success.”