The Under 15 and Under 17 Combined events weekend made a start today at the Bedford International Stadium. After the sultry heat of the previous few days, the weather and conditions were changeable from overcast to torrential rain, and a light swirling wind with the occasional strong gust. 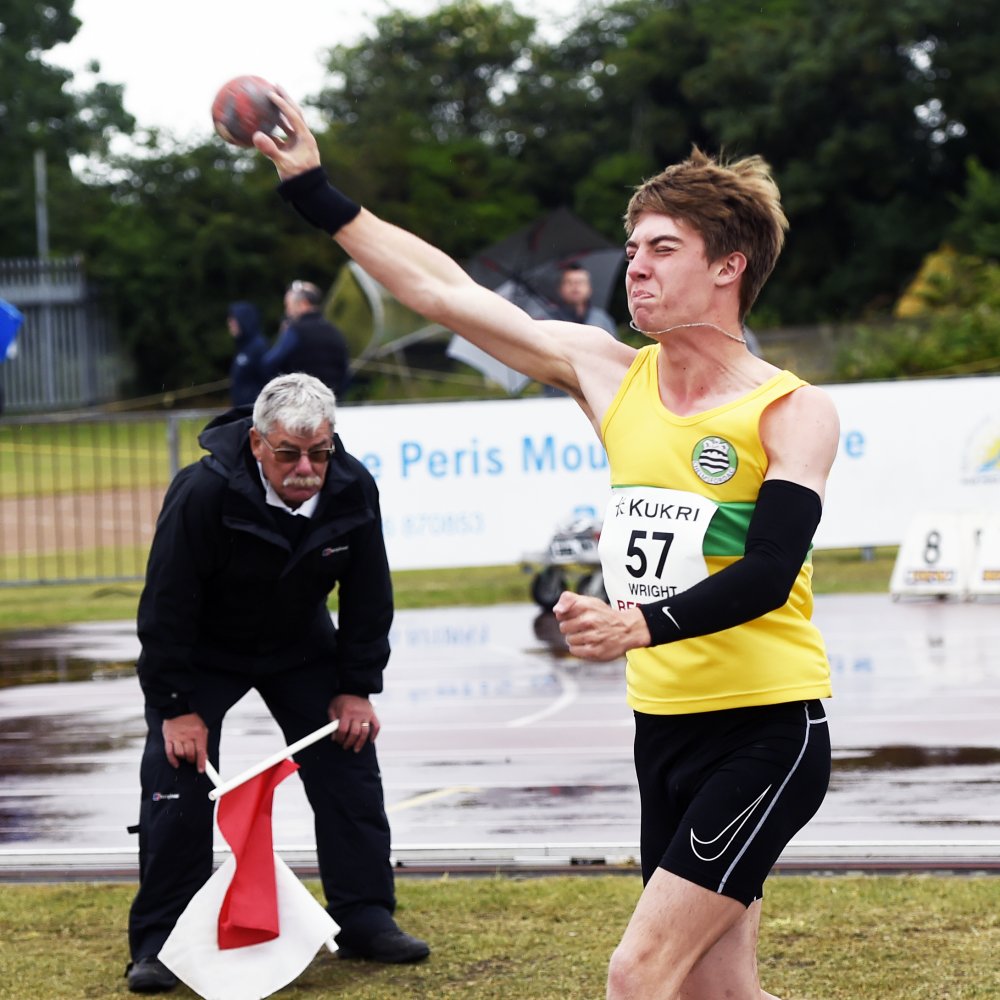 The U17 men will tackle the 10 events of the decathlon over the weekend. The 100m results saw an early lead for Ethan Ellis (Club: City of Norwich AC, Coach: Denis Costello) with Sam Wright (Chelmsford AC, Simon Hemmings) – who leads the UK U17 long jump rankings – and Joe Stone (Tonbridge AC, Leslie Stone) separated by a mere 2 points at this stage. Samuel however made his mark in the long jump – winning that event with a leap of 6.90 and propelling himself to a hundred point lead over Ethan.

Sam consolidated his lead by also then winning the shot put (11.90) and high jump (1.80), gaining over 50 points advantage over each rival in those events. At the start of the 400m, Sam was in the B Heat and Ethan and Joe in the B heat but the Chelmsford athlete had almost 300 points to play with and easily finished with the highest points overnight. However Ethan Ellis took more than half a second from his 400m PB in winning that last track event. 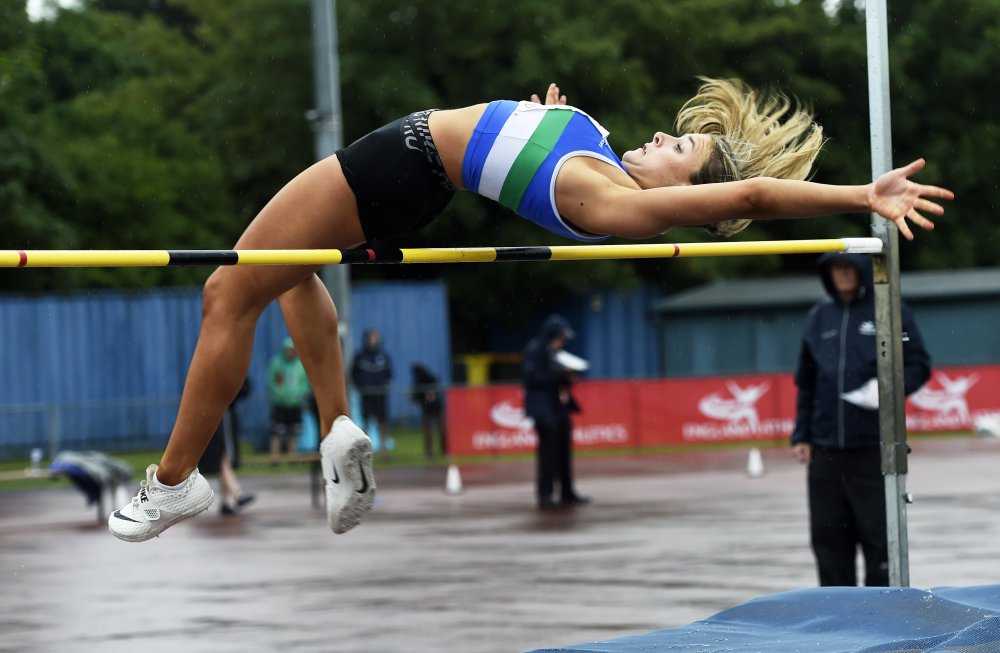 Twenty athletes started the Heptathlon in Bedford needing to clear 8 hurdles over 80 metres.  Top points scorer in the heats was Sophie Lisk (Cardiff Archers) with a time of 11.60. Next up – just one barrier to clear but a lot higher! Jenna Hilditch (Victoria Park City of Glasgow, Moira Jordan) and Jessica Lee (Carmarthen & District Harriers) both cleared 1.62 for equal points despite a different number of attempts at the height and Jenna took the overall lead. They were followed by Nia Powell (Cardiff Archers, Phillip Warwicker) at 1.59, just a cm below the PB she set last week at the Welsh U15 championships.

Next it was the shot put with Amber Hughes (Southport Waterloo, Barrie Hughes) moving up the rankings into 3rd with an 11m put, only bettered by Abi Belward (Winchester & District AC, Andrew Fisher) and the English indoor shot and pentathlon medallist Hayley Dimond (Marshall Milton Keynes, Claire Dimond), who after a blistering hurdles was now in overall first position. However she was a DNS on the 200m start line and Jessica Lee ran a PB of 25.02 to finish second to Jenna at the end of Day 1. 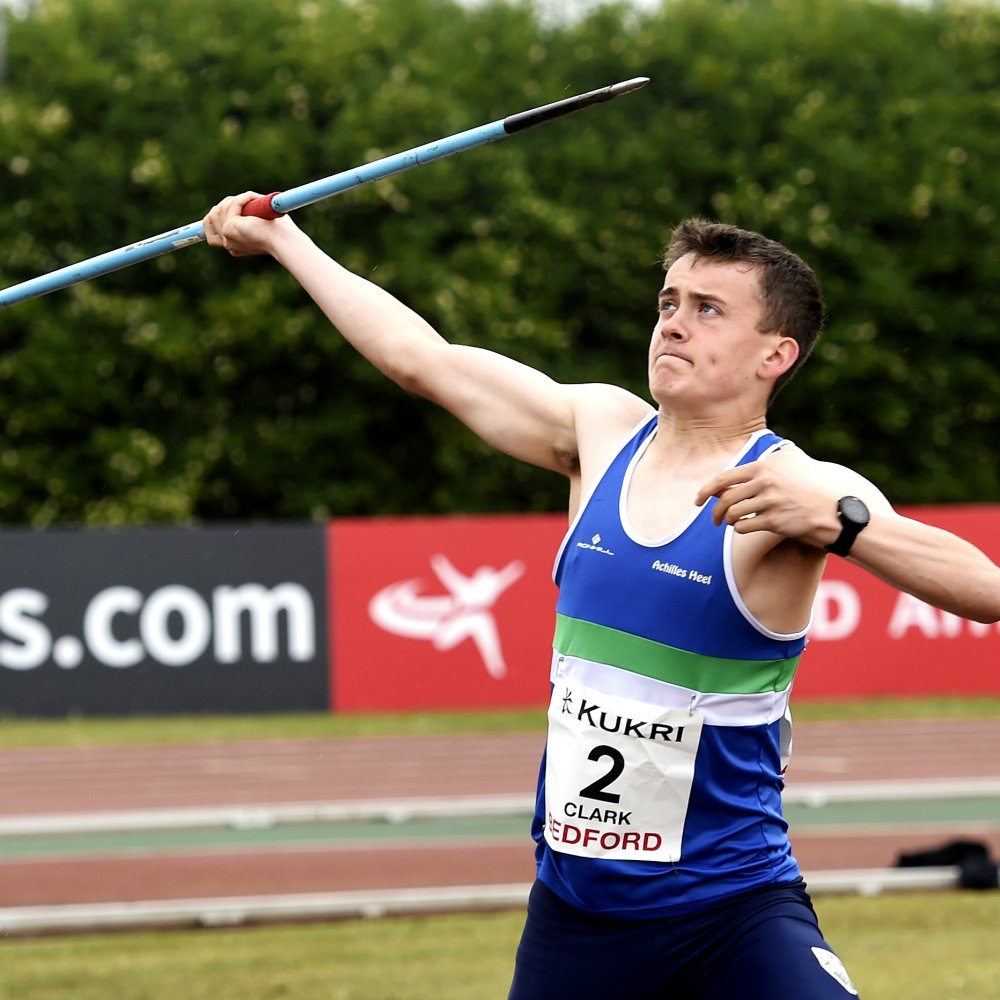 James Clark (Victoria Park City of Glasgow, Bernard Marley) finished with the most points at the end of day 1 for the U15 boys’ Octathlon. Luca Phillips (Cardiff Archers) started the day off well with a good lead after a 11.94 100m race but almost crashed out in the javelin before following his first two no throws with a 24.37m to keep him in the running.

Next up was the high jump in wet conditions with Oliver Belbeck (Cheltenham and County Harriers) clearing 1.59 for 457 points and now just 40 points shy of James Clark’s cumulative points lead. The Scottish athlete then transformed a 3 second lead over Oliver in the final 400m to secure top spot overnight. 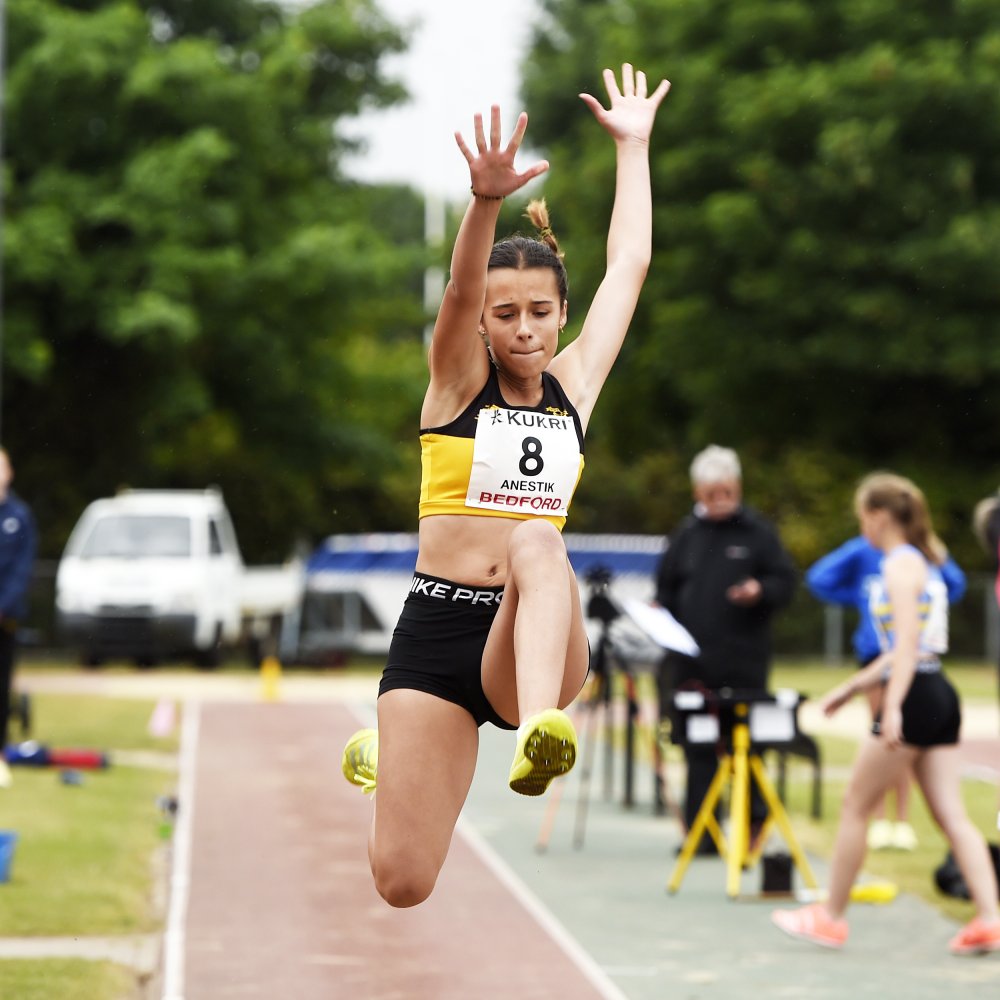 The U15 girls also compete in a two day combined event competition – the Hexathlon. Four athletes went under 12 seconds in their only track event of the day, the 75m hurdles and Eve Drury (Leeds City AC, Daniel Gardiner) took an early lead with her 705 points. They were at the sandpit next where Eve, who is third on the UK U15 long jump rankings this year, stamped her mark at 5.30m (with a 2.5 headwind) came out top there too.

The final event of the day for the Hexathlon was the javelin. No surprise that Jessica Howells (Guildford & Godalming AC, Andrew Fisher) , ranked third in the UK U15 for the javelin this year, was top in that event. However, she needed a final-round 35.03m to seal the top points. Victoria Anestik (Falkirk Victoria Harriers, Marek Anestik) was second with a PB of 33.34m and this was enough to give her a lead of just one point over Eve at the end of day 1.

Results are also available on the Roster Athletics app and are updated live during the event. As for Saturday, on Sunday we will have regular updates on Twitter.