With Commonwealth Games places up for grabs and the selectors on-site preparing to make their final decision with the end of the qualifying period for Birmingham 2022 not far away, competition was always going to be tense and so it’s proving after day one of the combined events championships.

Who will secure those much-desired team spots for Birmingham was very much open to debate beforehand, but once that first gun is fired form can – and so often does – go out the window and the title will go to who responds to the pressure better than their rivals.

Favourites and long shots were all in with a shout in Bedford, and as the results from day one will testify, still are as Sunday dawns!

Here’s how it’s panning out as we go into day two.

Reigning champion Jade O’Dowda opened her account in the best possible way with an assured victory in the 100H. Her 13.72 was not only worth 1018 points, it was also a personal best. The Newham and Essex Beagles athlete kept the pressure on with a 1.74 clearance in the high jump, equal second highest, behind Wales’ Lauren Evans (Cardiff Athletics, Fyn Corcoran) who cleared 1.77 to follow up her 13.84 hurdles. Another lifetime best of 13.44 by O’Dowda in the shot saw her stretch her lead going into the 200m where she ran 24.64. She ended the day on 3598. A footnote will show that fellow Newham and Essex Beagles athlete, Niamh Emerson deliberately fouled in the high jump, but it was great to see the Commonwealth bronze medallist and 2018 World U20 champion back in action after so many years, as she clocked 14.55 in the hurdles, threw 13.42 in the shot put and ended the day with 25.01 for 200m into a -2m/s headwind. It’s early days in her comeback but definitely a name to keep an eye on 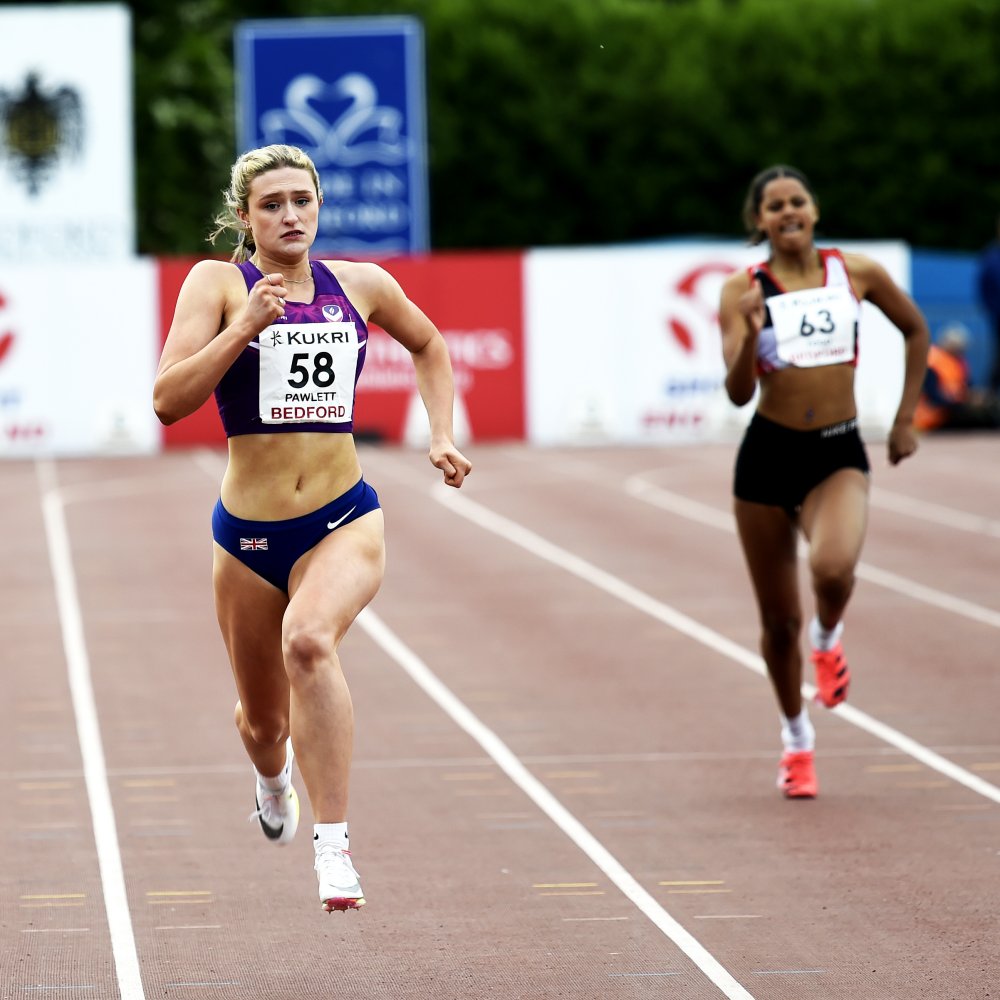 In the 100 hurdles, Abigail Pawlett (Trafford AC, Joe Frost), third ranked in the world in 2022 for the heptathlon powered to a 13.78, worth 1001 points to confirm she was in the mood for something special in Bedford. Behind her Eloise Hind (Oxford City, Maria Marriott) ran 14.44 and followed that with 1.71 in the high jump to keep in touch with Pawlett, who had to call it a day at 1.68 on this occasion. Madison Hutton (Epsom and Ewell Harriers, John Shepherd) ran a PB of 14.70 in the hurdles and followed that with another one, like Pawlett clearing 1.68 as the top three stamped their authority on the competition. Next up was the shot where Pawlett threw a PB of 13.55 in the first round to stretch away from the chasing pack. And continuing a theme, her 24.12 victory in the 200m was also a best-ever time for the Trafford athlete in the increasingly blustery conditions. Pawlett’s race was run into a -1.4m/s headwind, while Hind in second at the end of the day had to battle a -5.2m/s for her 26.03 clocking. Pawlett leads 3573 to 3145. 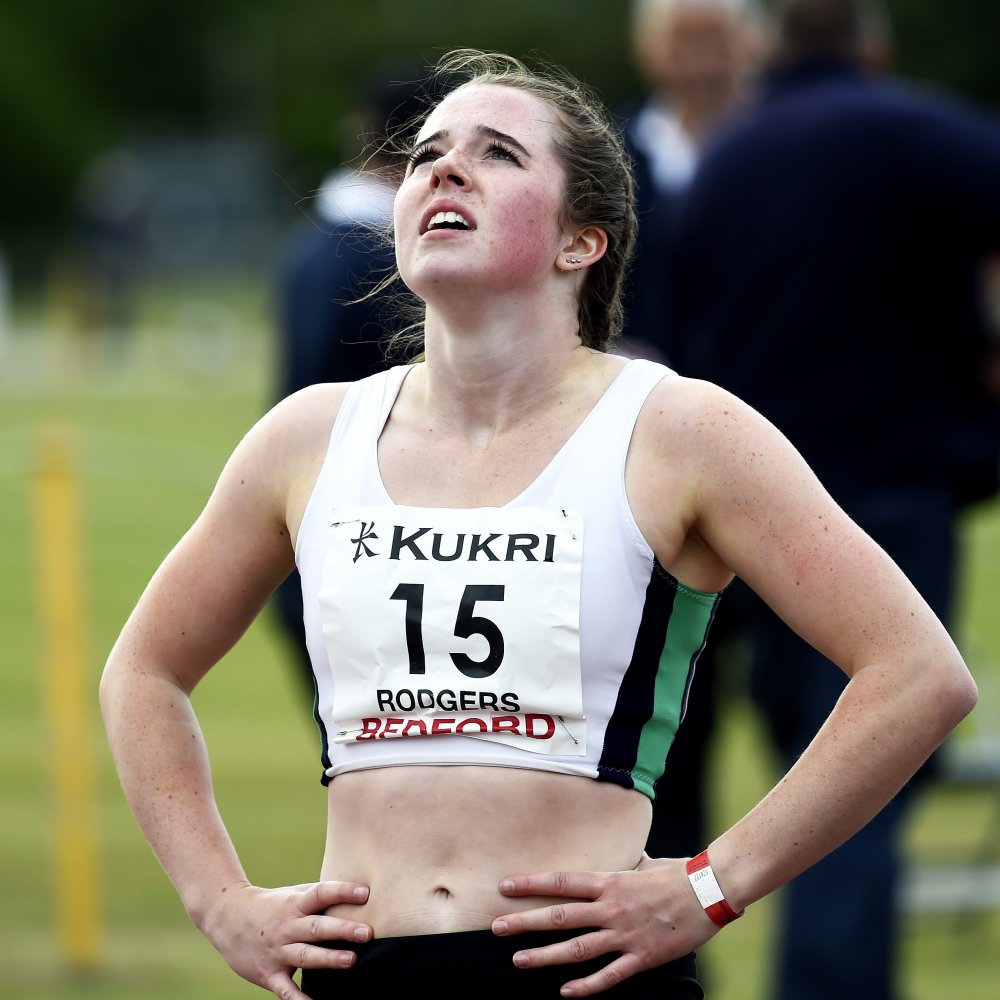 The early pace was set by the current England indoor champion Seren Rodgers (Taunton, Steve Shaw) who took the 100 hurdles in 14.33 (932 points) and the high jump with 1.62 (759). Behind her Grace Colmer (Winchester and District, Andrew Fisher) clocked 14.60 and also cleared 1.62 to keep things close, while Chisom Nwafor (Chiltern Harriers, Alan Hewson) 14.69 and 1.62 was also very much in the hunt for gold. Indeed, Nwafor threw 13.81 to ease ahead at this point. Behind her, Rodgers recorded 12.19, while Colmer slipped back to third with 11.43 in this ever-changing competition. And the competitive nature of this age group was mirrored in the 200 as just 0.05sec separated Nwafor and Rodgers, the Chiltern Harrier crossing the line in 25.33 to Rodgers’ 25.38. That meant the scoring meant Nwafor went into Sunday with 3280 to Rodgers’ 3217.

Two athletes dipped below the magical 11-second mark in the opening event, the 100m with Sam Talbot (City of Sheffield and Dearne, John Lane) clocking 10.73 for 922 points in front of Harry Kendall’s (Tonbridge, David Hull) 10.77 (912 points). A not-so-distant third was Caius Joseph (Basingstoke and Mid Hants, Rafer Joseph) in 11.06 and 912 points. A big PB in the long jump then saw Joseph move into an early lead as his third-round effort 7.12 was not only good enough for 842 points, it also saw him beyond seven metres for the first time. While that was undoubtedly noteworthy, he couldn’t match Frenchman Luc Brewin’s (Loughborough University) 7.25, an improvement of fully 55cm! PBs continued to be order of the day for Joseph in the second round of the shot as he recorded 13.57. Kendall responded with 13.72 and then a huge PB of 14.49 with final throw close to 50cm further than his previous best to take the lead after three events. Talbot, winner of the Bryan Clay Invitational in the USA this spring, kept himself in the hunt with 13.44 in the final round. 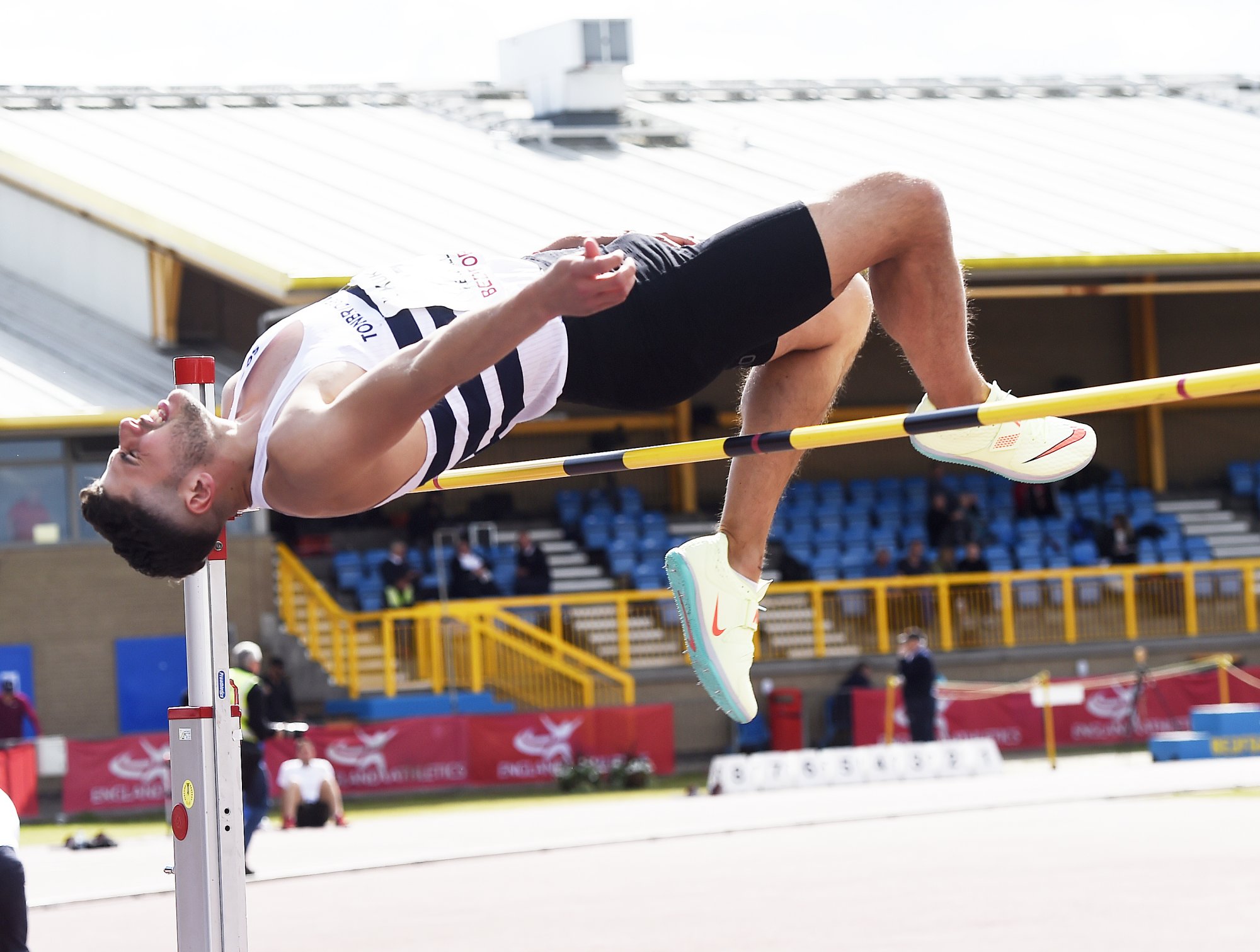 A fabulous high jump, complete with celebratory shouts following each clearance saw Kendall clear 1.98. And that set up a fabulous final event, the 400m. There Talbot proved his competition is far from over (after a 1.86 high jump) as he smashed his best time ever with 47.79 (919pts), while Kendall continued his celebrations as he recorded an even bigger improvement, running 48.06 which meant he signed off with 4158 to Talbot’s 4016. Joseph is back in third, not far adrift with 3936.

Much of the pre-event speculation revolved around how well Sammy Ball (Reading, Michael Dyer) would do, but clearly in the opening race ­– the 100m – Scotland’s Adam Hoole (East Lothian) had something to say about that as his 10.83 (899 points) shaded Ball’s 10.96 by 29 points. Hoole then stretched his lead with 7.08 in the long jump, while Ball hit a solid rather than spectacular 6.86. In what is turning out to be a fascinating competition Ball opened his account in the shot with 14.69, before following that with a lifetime best of 15.10 with his second-round effort. Patrick Morgan (Hereford) threw a huge 15.42, while Hoole got in on the PB act with a 13.94 throw to keep himself marginally (just 10 points) in front. An intense high jump saw Ball clear 1.95 and edge ahead of his Scottish rival who jumped 1.80. Ball edged him again in the final event, the 400 – 51.45 to 51.62 which means Ball leads 3954 to 3825. All to play for!

William Reid (Wakefield) opened his account in the 100 with 11.61, good for 730 points and followed that with 6.56 in the long jump to hold the lead after two events. However it was all change from that point as Northern Ireland’s Finn O’Neill (Lifford Strabane, Wendy Phillips) took the overall lead thanks to his 14.26, a PB.  Patrick McLean-Tattan (Havering) put together 11.65, 6.10 and 12.92 to occupy second at this point while Reid was just one point back. O’Neill looked comfortable over one lap to increase his lead thanks to a 51.43, while Reid ran 56.03 to remain in the silver medal position. But only just as McLean-Tattan is breathing down his neck just 16 points back – 3442, 3126, 3110.

Huge thanks to our volunteer Technical Officials who braved the sun and wind all weekend to ensure a smooth and fair competition, the physios who kept our athletes going, and other volunteers and organisers who were invaluable in so many areas of the event. Also thanks to our new Partners Water in a Box who provided hydration for everyone.