The Pulse - a new name for our newsletter!

Having run a competition recently to name our monthly athletics and running newsletter, we are delighted to announce it will now be called ‘The Pulse’.  With the England Athletics strategy focusing on placing athletes and runners at the heart, we thought this name was the perfect fit for our membership newsletter.

In fact, the name was so good that two individuals came up with the winning suggestion: Georgina Walker from Lymm Runners and Matt Spicer from Yate and District AC.  We asked our winners how they came up with the name:

“I chose ‘The Pulse’ for several reasons,” said Matt. “Firstly, it’s something a lot of athletes and runners are very familiar with checking.  Secondly, it provides vital information.  People who ‘have their finger on the pulse’ are also those who are deemed to be in the know which seemed very fitting for a news update.”

“I was reading the email from England Athletics and felt like it would be a great name for the newsletter so decided to enter,” said Georgina. “I never win anything, especially not in the running world!”

Both Matt and Georgina have been involved in athletics and running for several years and are a big part of the community.  We asked them both if they could tell us a little bit about themselves.

Matt told us he is am now a coach, official, club webmaster and part-time master’s athlete.

“I enjoyed my most successful years as an athlete in the early 1980’s and 90’s when I represented the GB juniors on three occasions as a hammer thrower.  I currently coach a squad of 12 throwers.  This year we all have our fingers crossed that Owen Merrett might gain selection for the U20 World Championships in Columbia.” 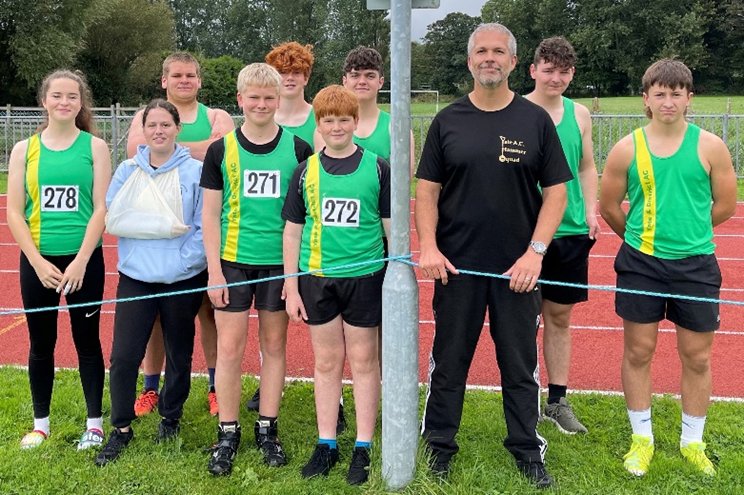 Georgina is a Coach in Running Fitness (CIRF). She described what she does for the sport:

“I’ve been with Lymm Runners for several years.  I also run both a kids and grown-ups run club at Cherry Tree primary school.  I am also involved with the junior section of Warrington AC where I help coach the U11 running programme.  I love helping others to keep fit and active and enjoy the sport.”

Matt and Georgina also provided us with a bit of information about their clubs.

Matt has been a member of Yate and District Athletic Club since 1984, one year after it was founded.

“We are partners with local club Westbury Harriers who focus on endurance running whilst we specialise in Track and Field.  We compete in several leagues including the local Avon League, both YDLs (the U17s/U20s as part of Team Avon), The Midland League and we recently joined the National Athletics League.  Last year we won the England Athletics “South West Club of the Year” award.  This is something we are all really proud of as a club.”

Georgina joined Lymm Runners not long after it was established in 2010.

“We are an England Athletics affiliated club and enjoy running for fitness and pleasure.  We hold four training sessions a week and also host several races throughout the year.  These include the High Legh 10k, The Lymm Festival Trail Races & Fun Run, The Warrington Way 40 and the Lymm Dickensian Santa Dash.  We also compete in league events including the North West Cross Country League.”

We would like to thank everyone who took part in the ‘name our newsletter’ competition and give a special thanks to Matt and Georgina for coming up with such an excellent name suggestion.  Don’t forget to look out for the next edition of ‘The Pulse’ in your inbox.

Photos:
Matt Spicer with some squad members at last season’s ‘Last Ditch Thrown Open Meeting’ in Par, Cornwall.
Georgina Walker with her race number from a competition in 2018.