Stand by for action

Tactics as well as good old fashioned personal bests were the order of the day at the world’s first indoor Dynamic News Athletics (DNA) event, held at Glasgow’s Emirates Arena on Saturday 5 February.

Six countries (England, Scotland, Wales, Ireland, Spain and Portugal) competed over 11 events (8 on the track and 3 in the field) with the final team result still in doubt with just a lap to run in a new event on the calendar – the Hunt, a mixed relay over 800m (women), 600m (men), 400m (women) and 200m (men) where the competition leaders are given a time advantage at the start based on the points accumulated in a frenetic two hours.

But before that big finale, the large crowd that filled the Glasgow Emirates Arena was treated to a packed programme of back-to-back, unpredictable action with just one event taking centre stage at any one moment. The men’ shot perfectly illustrated that where in the traditional sense it would have been a three-way battle between England’s team captain Scott Lincoln (Paul Wilson, City of York AC), Portugal’s Francisco Belo and Spain’s Carlos Tobalina. But in this format, it’s all about the group draw, which results in a head-to-head one-throw battle over two rounds before a final throw between the group winners. Lincoln, training well this winter and eying up a 21-metre effort in the summer, cruised through his rounds with 18.62m and 19.36m wins, while a foul from Portugal’s Belo in the other group relegated him to a fourth and fifth place throw off where he hit a massive 20.36m. Ordinarily a great throw like that would have won the whole competition, but there’s no room for error in this event! And even though it was the furthest effort it got him just fourth place. So, it was down to the final throw between Tobalina who had beaten the Portuguese earlier in the group round. He threw 18.82m but Lincoln responded with 20.13m for the win. 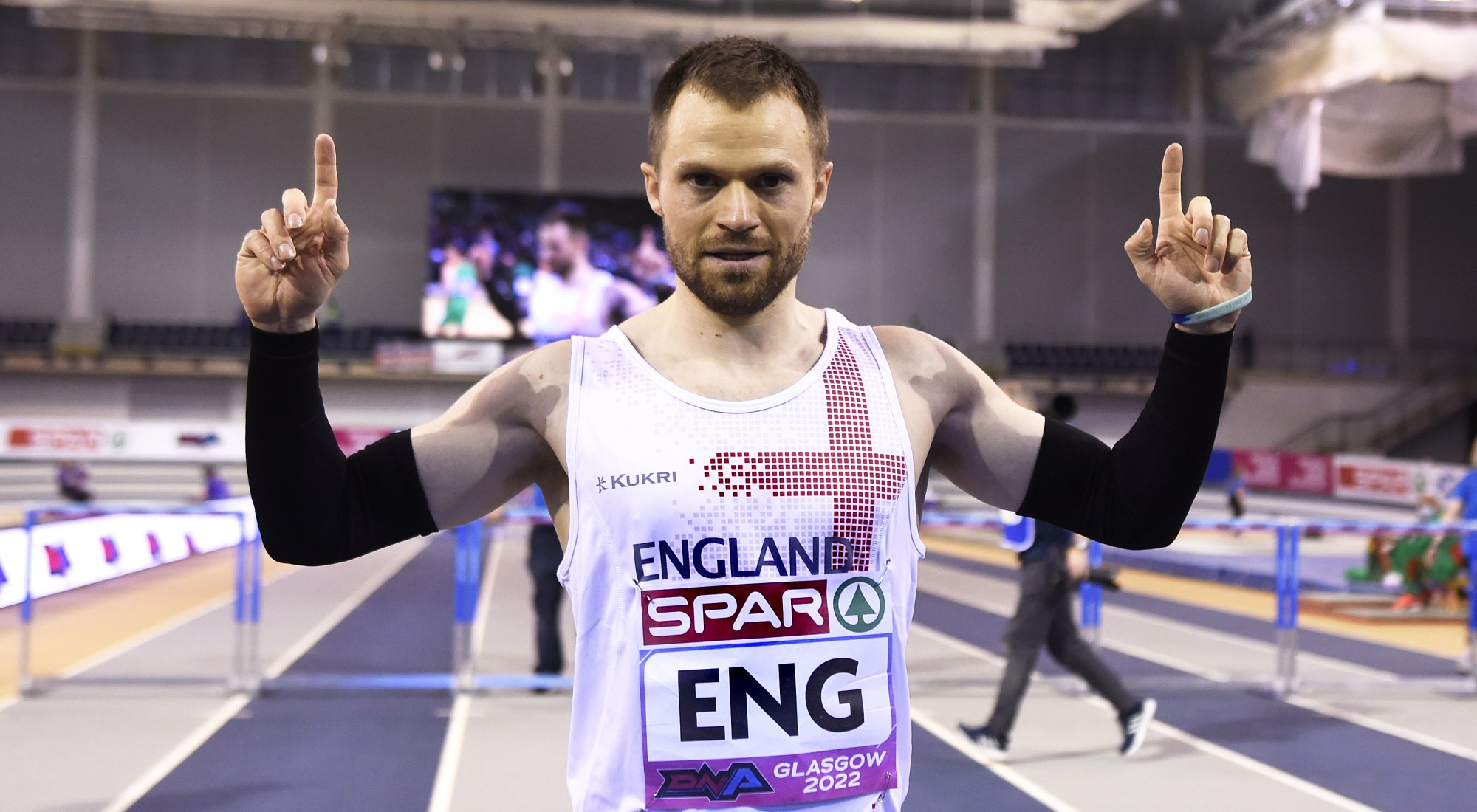 It wasn’t all about new events and carefully formulated pre-competition plans though. The 60s were far more straightforward and as ever, all about raw power. England’s Andy Robertson (Mike Carolan, Sale Harriers Manchester) demonstrated just that as he used his fast start perfectly and was never headed on his way to a controlled looking 6.62 win from Wales’ fast-emerging Jeremiah Azu who ran 6.64.

England’s sprinters also looked great in the mixed 4x2x200m relay although perhaps not quite as controlled, certainly in their final 30 metres or so! That’s because the mixed 2x2x200 relay involves two sprinters running two legs each which, as simple maths will tell you, means there’s not too much time to recover from your 20+sec effort. Tom Somers (Lloyd Cowan, Newham & Essex Beagles / Loughborough Students) led off, handing to Amy Hillyard (Stewart Marshall, Birchfield Harriers / Wolverhampton Uni), who of course then had to run again with plenty of lactic acid on board. They ran out comfortable winners in 1:39.72 although they probably wouldn’t agree with the word ‘comfortable’ to describe their legs in the closing stages. 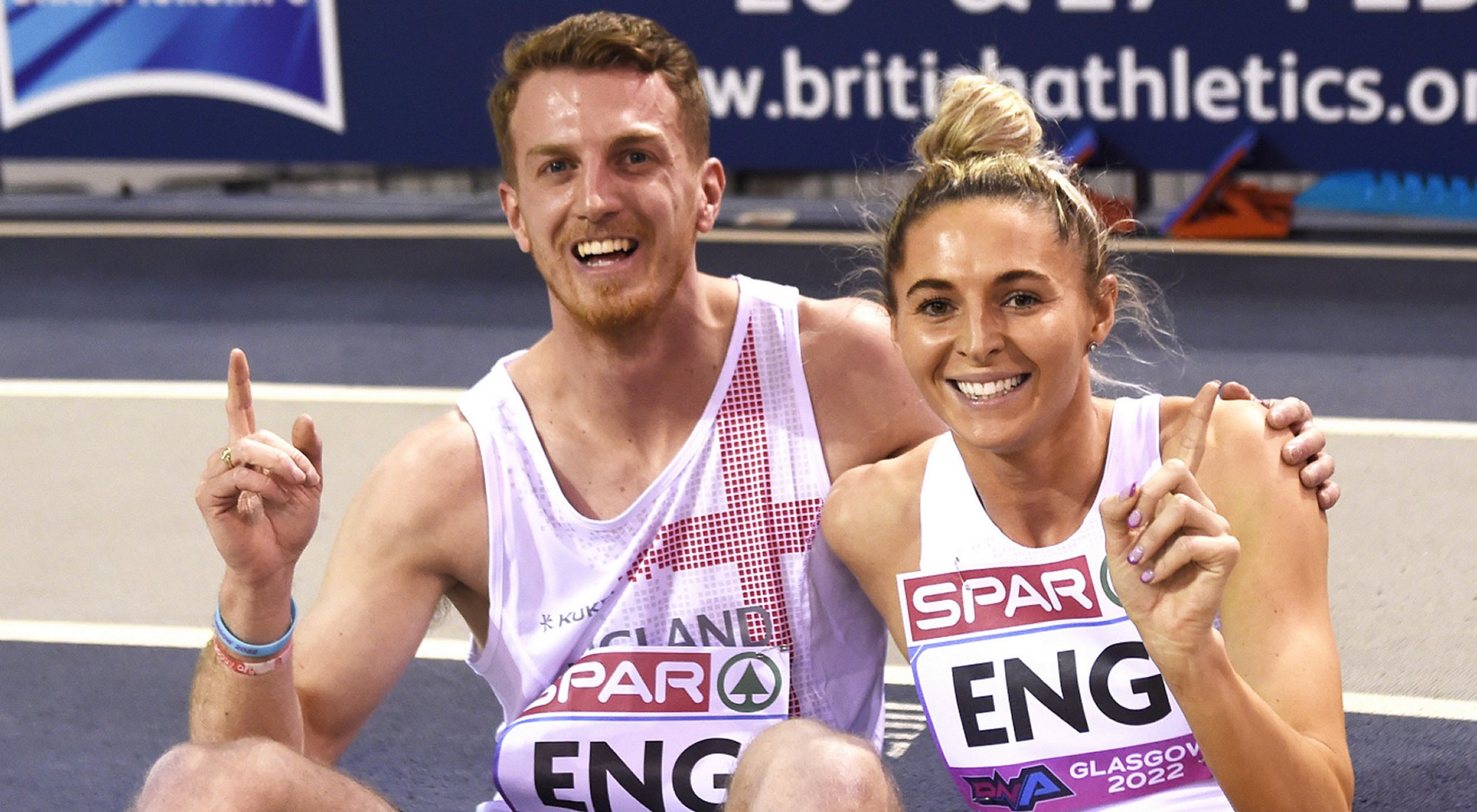 The high jump is even more unconventional as the competitors have just one jump each in their group head-to-head competitions and to make it even more exciting, they reveal the height they’ll attempt at the last moment. This means their rival doesn’t know the height they’ll attempt to clear until a card is flipped around. For instance, England’s Divine Duruaku (Adam Gallie, Notts AC) opted for 2.00m, while at exactly the same moment he showed that to the crowd his rival Ireland’s Ciaran Connolly revealed he would attempt a risky-for-him 2.05m. And despite clipping the bar it was the Irishman who took the honours. Duruaku then opted for 1.95m for his next jump, a height he cleared easily to secure a third-place jump-off slot where he shared the points after he and his Portuguese rival fouled out at their very different heights of 2.13m (Duruaku) and 2.06m.

The pre-event chat had suggested Spain would be the team to watch so it was no surprise to see their quartet roll out comfortable winners of the first event, the mixed 4x400m. England’s four of Susanna Banjo (Steve Fudge, Newham & Essex Beagles / Birmingham Uni), Hannah Kelly (Les Hall, Bolton United Harriers & AC / Birmingham Uni), Ben Higgins (Stewart Marshall, City of Sheffield & Dearne AC / Loughborough Students), James Williams (Paul Waters, Liverpool Harriers), clocked 3:22.23 but trailed the Spanish quartet for all but the opening leg as the Spaniards improved their national record by more than 10 seconds with a very impressive looking 3:18.90.

In fact, it was slightly more than that difference that the two teams carried into the final event, the much-anticipated Hunt as Spain led England by what translated into a 6.7-second advantage (97 to 77 points). It would require something pretty special to close that gap especially as Spain included the European Indoor 800m champion Alvaro de Arriba on the 600m leg (77.2). He took over from Lorena Martin who had run a solid 800m in 2:04.8 to slightly stretch their lead so just as they had done in the very first event barely two hours earlier, it was Spain who crossed the line first ahead of England, controlling the final two legs of the relay to end what was a fabulous two hours of intense competition.

Go to dna.run for full results

Dynamic New Athletics, or DNA, is an innovative, team-based competition concept for athletics created by European Athletics to complement the classical athletics format. The aim of the DNA project is to bring the sport into the 21st Century, enhancing it with a new dimension targeting younger audience and participant groups. DNA integrates modified rules, presentational possibilities and digital communications elements that can be adapted for every level of the competition pyramid while remaining true to the essence of athletics. Key features include: