For once it was the venue that took centre stage at a major athletics event as Birmingham’s Alexander Stadium opened its newly refurbished doors for the first time to welcome athletes and spectators to the Müller Diamond League on Saturday 21 May.

In just over two months’ time, this fabulous new facility will host the Commonwealth Games – and a strong looking England team – and if Saturday’s atmosphere in the stadium is anything to go by, it will be absolutely rocking with sell-out crowds from 2-7 August.

Given the splendid backdrop, it was no surprise that the day was peppered with world-class performances off and on the track including Birmingham’s very own Matthew Hudson-Smith (Birchfield Harriers) who took the men’s 400m in an impressive 45.32 as he fought off all comers in the final straight.

There’s been much talk this year on social media that the long-standing UK record of 44.36 that dates to 1997 will finally go this year and Hudson-Smith, very much a local lad who has trained at this facility since his school days, is looking to be involved. But that’s for later in the season. This race was all about building on the 44.61 he’s already run in Florida and crossing the line first in the breezy conditions.

“I just wanted the win and then I’ll concentrate on the times,” he said. “No-one remembers times at champs, but you know the winners. I always thought I could come back but it is great to actually prove it. I’ve changed everything,”

he said as he described the work he’s done in the past three years to overturn injury and poor form and how he’s overhauled his diet, fitness regime, and his mental approach to competition to make sure he’s in the shape of his life ‘and ready for anything’ when the Games rolls around. “I’ve really looked at my mental health,” Hudson-Smith continued, adding that is often an area overlooked by athletes as they prepare for the majors and that focus has really helped him. 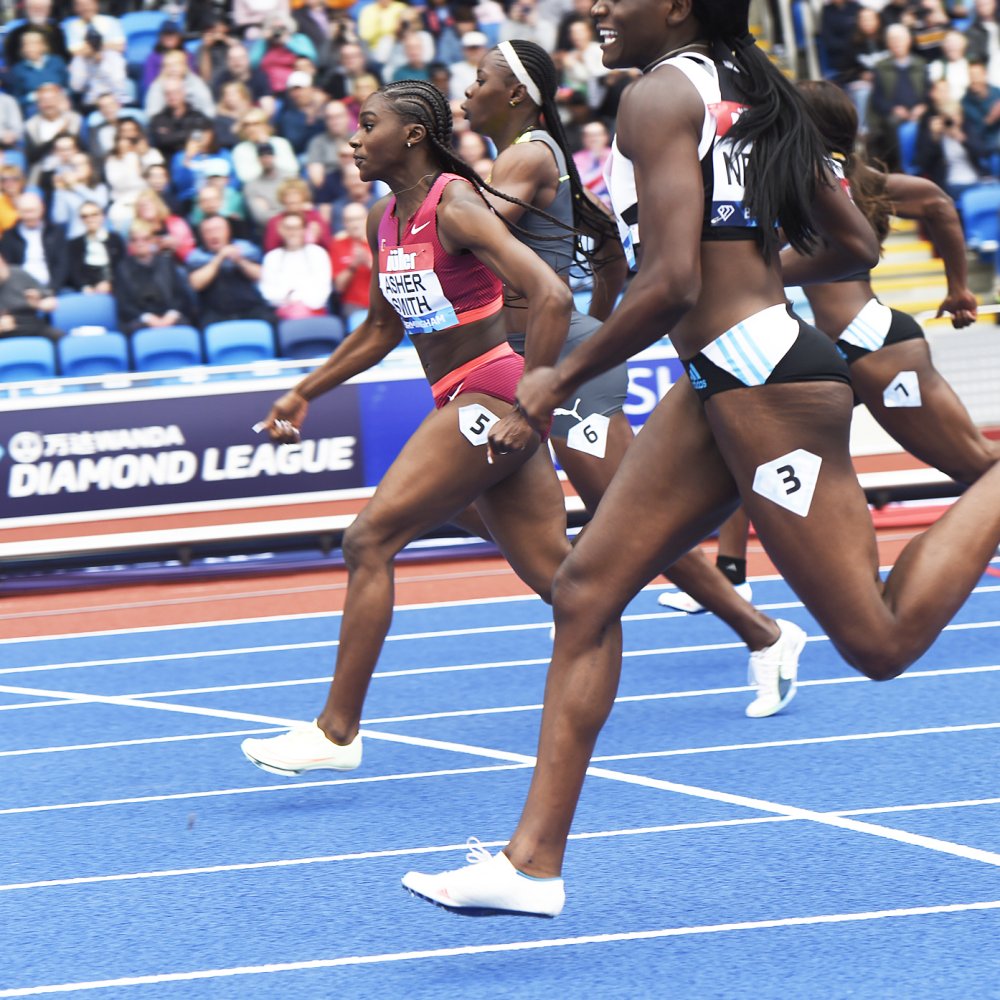 Also enjoying the new surroundings in Birmingham was England’s superb 100m sprinter Dina Asher-Smith (Blackheath and Bromley, John Blackie) who won in 11.11 in what was her first short sprint of the year (she’s run a 22.37 for 200m in Doha’s Diamond League).

“It’s all about executing your own game plan and focusing on yourself,” Asher-Smith said, backing up the approach Hudson-Smith is now following. “Yes, you do look at the other competitors, but it’s about yourself.”

As for the arena, she couldn’t praise it enough: “What a beautiful stadium,” she added, confirming she’ll be looking at the Worlds, Europeans, and Commonwealth Games in what will be a hectic and interesting year when it comes to maintaining top fitness.

Other sprinters in sparkling form were paralympic champions Sophie Hahn (Charnwood, Leon Baptiste) and Thomas Young (Loughborough Students, Joe McDonnell) who both flew to fast times in the ambulant 100m, Hahn stopping the clock at 12.81 for a relaxed looking win while Young leaned for the line to win in 10.95.

“Of course, winning is always nice but I’m just really happy to come here to this brand-new fantastic stadium and get the win. It’s amazing to have para-athletics at the Diamond League so a huge thank you to the organisers and British Athletics,” Young said.

Another athlete clearly also on top of her game is 800m Olympic silver medallist Keely Hodgkinson (Leigh, Trevor Painter) as she looked wonderfully relaxed over the two laps. A fraction inside 60 seconds at the bell, she eased her way to the front and stretched that lead over the final 150m for just about the most relaxed 1:58.63 you’ll see this season. 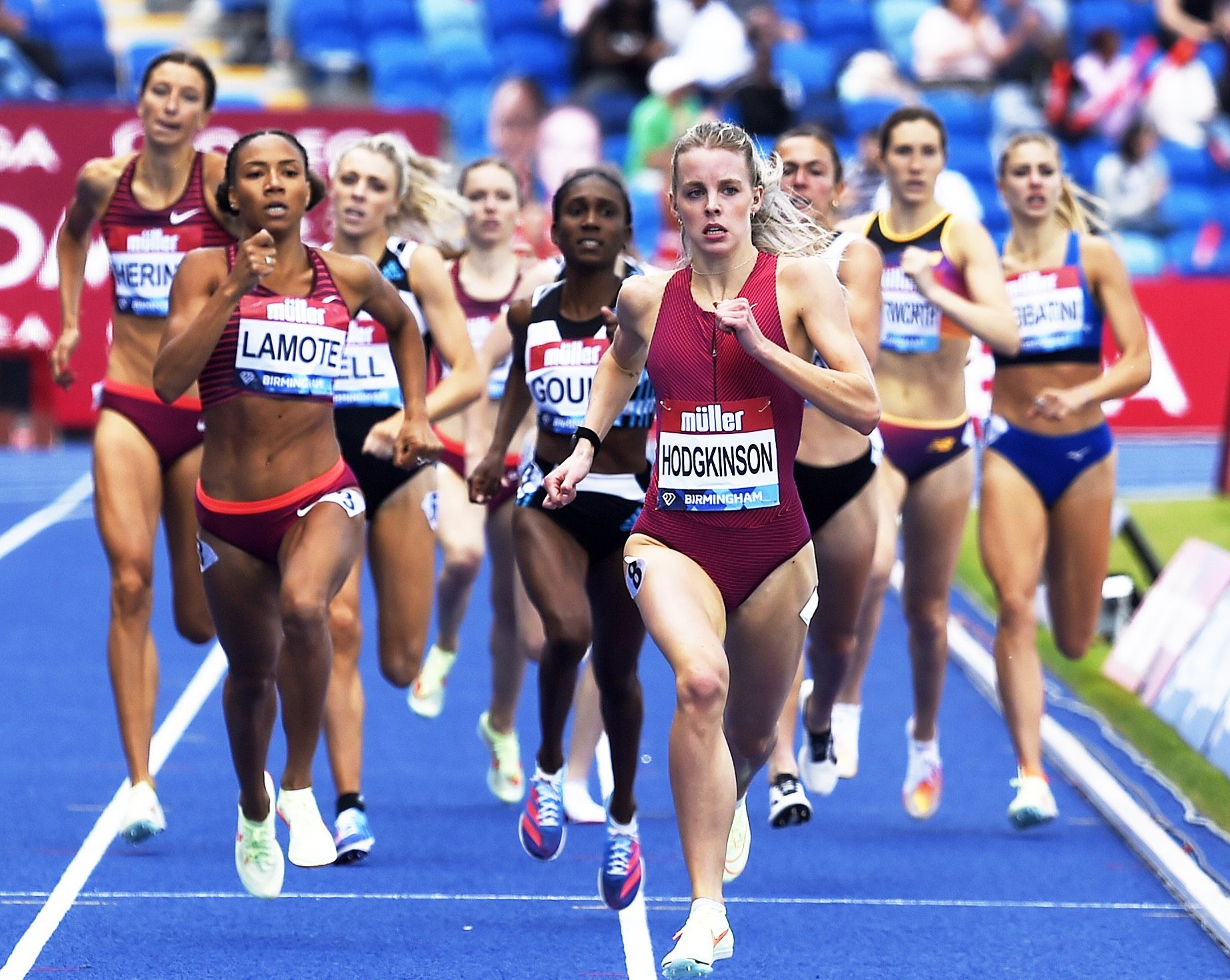 Next up is the Prefontaine Classic in Eugene next week, home to the World Championships and a venue that produces sensationally quick performances. “That track is amazing,” said Hodgkinson relishing the battles to come in the next few months.

“This race was a lot better than I thought it would be,” laughed Hodgkinson. “It’s still early days but that was a real confidence booster and something to build on.”

Behind her, Alex Bell (Pudsey and Bramley, Andrew Henderson) opened her 2022 account with a solid looking 2:00.67. Similarly, Matt Stonier (Invicta East Kent, Peter Mullervy) followed up his victory in last week’s Emsley Carr Mile in Highgate with a PB of 3:37.28 in the 1500m for 8th.

Also returning to action after a win in London last week was Jess Judd (Blackburn, Mick Judd) who followed up her World Champs qualifying 10,000m with a PB 14:57.19 in the 5000m. In touch with two laps to run, she faded a little in the final 500m and finished sixth, but with a 31:22 still in her legs to run a PB is very encouraging for the rest of the summer.

The long jump is also going to be very encouraging for English athletes as Lorraine Ugen (Thames Valley Harriers, Dwight Phillips) jumped an outdoors season’s best 6.65 in the third round to place third, while Jazmin Sawyers (City of Stoke) hit 6.60 in the same round. And let’s not forget World heptathlon champion Katarina Johnson-Thompson (Liverpool Harriers, Bertrand Valcin) who used the meeting to get ready for the Gotzis multi events next weekend.

“There’s a lot to be positive about,” said Johnson-Thompson, happy with her 6.41. Strength in depth for all to see.

And while, this was the first major domestic meeting of the year and it’s definitely early days yet, it looks like it’ll take something special to make a mark at the Commonwealth Games in Birmingham.