More records were broken on the concluding day of the England Athletics Indoor U15 and U17 Combined Events Championships.

A championship best performance was set in the U15 boys’ pentathlon, as Sammy Ball (Coach: Mike Dyer) won gold with 3,176 points. That mark also sees the Reading athlete, who won silver at these championships in 2018, go top on the all-time list for the age group. He started his contest with a time of 8.96 in the 60m hurdles, matching the clocking of the individual champion over the barriers, Freddie Clemons (Coach: Paul Bearman, Club: Stratford Upon Avon AC). That put the pair second after one event, with Zac Davies (Coach: Tony Clements, Club: Swansea Harriers) quickest of the lot thanks to his PB of 8.85.

Next up was long jump, the event in which Ball recently won the individual English title. Here he jumped 6.02 in the third round, short of his 6.07m PB but still his best mark of the season and enough to move him into first place in the standings. Wirral athlete Kresten Calvert (Coach: Pamela Green) was closest to Ball with 5.93. Davies recorded a solid personal best of 5.85 but dropped to second overall, while Fergus MacGilp (Coach: Mr Steve Alan Thomson, Club: Pitreavie AAC) went out to 5.82 to jump up to third.

As Ball dominated in the jumps, individual shot put champion William Lamprell (Coach: Margaret Nicholls, Club: Ipswich Harriers) prospered in his area of expertise, leading the pack with 14.48. Although that mark saw him leapfrog into second overall, Ball maintained a decent lead thanks to a PB put of 12.29. He followed that up with another best in the high jump, where he again showed terrific jumping ability with a first-time clearance at 1.80. Lamprell demonstrated strong range to hold his overall position by finishing second in that event with 1.68, ahead of the 1.65 of Kresten Calvert.

With there no chance of Ball’s 400+ points advantage being overturned going into the 800m closer, the question was simply of how big his end score would be. His time of 2:11.39 – the second best of the field – saw him collect a further 579 points for a terrific total of 3,176. Crossing just ahead of him, Fergus MacGilp, was quickest overall with 2:09.97 – a well-time personal best that moved him from fourth in the standings to silver spot on the podium. Lamprell’s 2:30.06 time ensured he remained in the medals, collecting bronze.

There was a local winner in the U15 Girls’ Pentathlon, which saw Hallamshire Harrier Erin Lobley (Coach: Paul Ttereve) score 3,518 points to go fifth on the all-time list, one place above recently-crowned European indoor champion Katarina Johnson-Thompson. Lobley, the 2018 Scottish indoor pentathlon winner, did the damage across the first four events, producing personal best performances in each. After the ninth quickest hurdle time of the 50-strong field, a 9.54, she went into the lead after the long jump, where her opener of 5.34 proved her best of the day and the best in the field, although the 5.32 of Tilly Mycroft (Coach: Lee Walker, Club: City of Sheffield and Dearne AC) made it close in the event. Seren Rodgers (Coach: Steve Shaw, Club: Taunton AC) was next best with 5.18 and moved second overall.

She was more dominant in the shot, which she led with 12.49. The 10.60 of Patricija Nemanyte (Coach: Martin Bishell, Club: Derby Athletic Club) was the next best, just ahead of the 10.58 of Maya Kendell (Coach: Steve Shaw, Club: Taunton AC).

In the high jump, Erin found her final personal best of the day with 1.62. Eloise Hind (Coach: Marcia and Ian Marriott, Club: Radley Athletic Club) bettered that mark, producing a PB of 1.65 to move second in the overall standings, but trailing the leader by nearly 300 points. Hind finished her day with a personal best in the 800m, but Ludley was able to shadow her to the line, finishing 0.28 seconds back in 2:37.70 to confirm her gold medal. Hind finished with 3,229 points for silver. Seren Rodgers finished with 2:34.76, the second best clocking of the field, to recover from fourth place to win bronze. 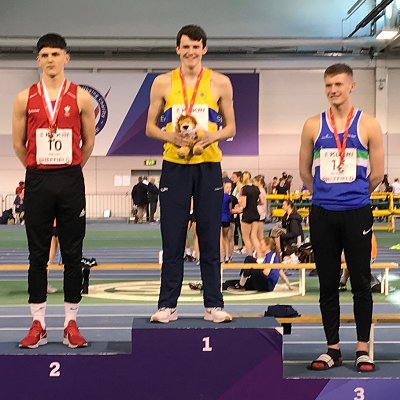 Fotheringham, the recently crowned Scotland champion, had led overnight, but his 8.98 clocking in the day’s 60m hurdles opener was only 9th best of the field. That saw his overall lead cut to just seven points, as Kyle McAulay (Coach: Alan Forbes, Club: Victoria Park Glasgow) found the best speed over the barriers with an 8.41 PB to move closest to the leader. Hillman, lying in third, also cut the gap, recording 8.58 to move within 11 points.

But in the following event, the pole vault, Fotheringham showed terrific mettle. He cleared with his first attempt at 3.86, then with his second at 3.96, to set a personal best and lead the event by 20cm. Closest to him was Hillman, who moved into second overall with his 3.76, as McKaulay cleared 3.26 – 1cm off his PB.

Fotheringham entered the 1000m finale with a 66 point cushion over Hillman and a six-second superior PB, and he did just as was necessary to ensure the win. Hillman battled, clocking a lifetime best of 2:46.48, but Fotheringham was just a nudge behind; his 2:46.64 time ensured gold with a personal best score. McKaulay ran 2:58.19, slicing close to 10 seconds off his PB for a well-earned bronze.