The England team repeated their win of last year in the Loughborough International today with a series of fine performances. Although victory in the historic match was significant, many athletes were at least equally focused on PBs and qualifying standards.

For some, the chance to represent England again at the Commonwealth Games in Birmingham this summer is the big prize and standards were keenly sought here. 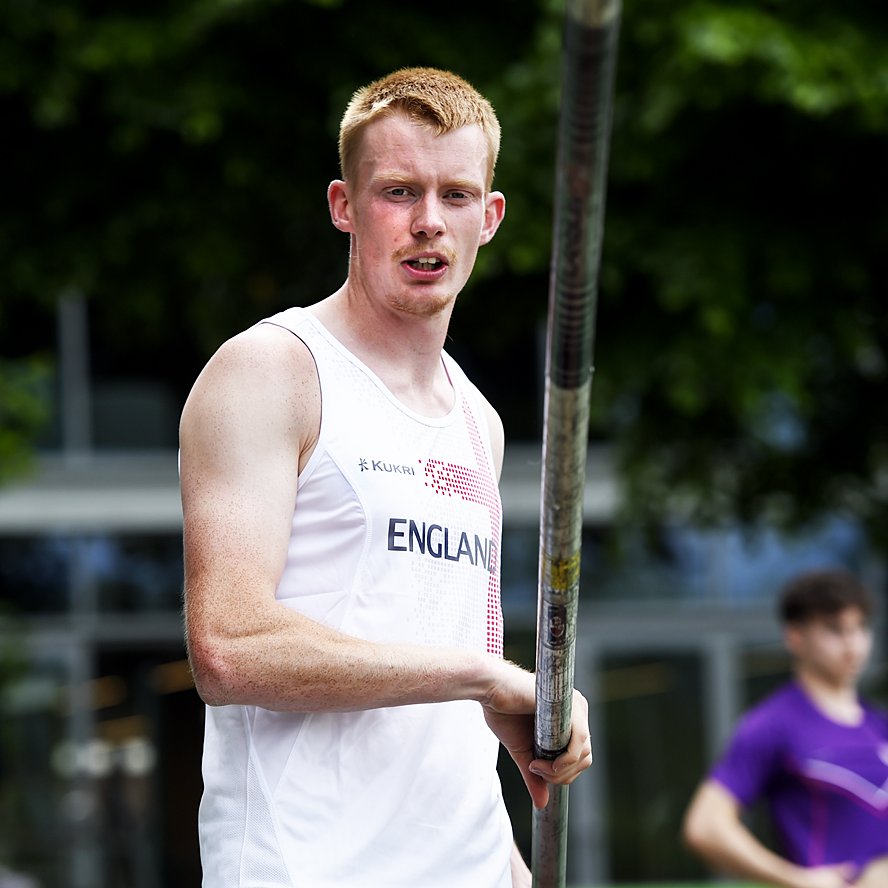 Adam Hague (Sheffield and Dearne; Trevor Fox) was one of those chasing marks, going over at 5.45m to win the pole vault and claim the England standard for Birmingham Commonwealth Games. For the 2015 European junior champion, that was his best height since 5.20m. In a great competition, Owen Heard (Harrow AC; Kate Rooney) and Lazarus Benjamin (Sale Harriers) set PBs of 5.30m and 5.20m respectively for second and third. Loughborough’s Molly Caudery (Thames Valley Harriers; Stuart Caudery) produced another of the performances of the day as she went over 4.50m in the pole vault. That height was just 3cm below her PB and she then had three unsuccessful attempts at a would-be European Championships qualifier of 4.60m. England’s Jade Ive (Sutton & District) would have been disappointed with her 4.05m for sixth, failing at 4.15m.

Although she was competing for her alumni Loughborough rather than England, Jessica Judd (Blackburn; Mike Judd) continued her excellent form in winning the 1500m. After securing 10,000m selection for the Worlds eight days earlier and setting a sub-15 5,000m PB the day before in Birmingham, Judd was a class apart as she returned to the shorter distances at which she started her career. Showing her great range, she clocked 4:16.36 as Khahisa Mhlanga (Herts Phoenix; Mick Judd) was second for England with 4:21.24.

Katie Head (Newham and Essex Beagles; Paul Head) got the England team off to a great start with maximum points in the hammer, one of the best events of the day in terms of the standard of the field. Despite five athletes having thrown over 64m this year, the marks were a little down on season’s bests. However, Head had a consistent series with five throws over 64m, led by 66.18m in the fourth round, which would have been a PB until this year. Charlotte Payne (Reading; Paul Dickenson) was second with 65.56m.

The England team won both 4x100m relays, which were the opening track events in the match. The squad took over with a good lead in the men’s event and held on to win 39.97 from the closing GB Juniors squad (40.03). The women’s quartet were initially DQ’d but then reinstated, clocking 46.22 from NAL (46.89).

Success Eduan (Sale Harriers; Anita Richardson), in her first year as an under-20, took a big chunk out of her PB to gain a World U20s qualifier in the 200m. Her time of 23.30 makes her the fastest junior in Europe this year.

England’s Jade Lally (Shaftesbury Barnet Harriers; Zane Duquemin) took the expected victory in the discus but was disappointed with her 57.84m, around 4m down on her season’s best. Lally, who threw 57.90m at the Diamond League in Birmingham the day before, said her training had been impacted by flooding in Brisbane, Australia, where she now lives. The Rio Olympian said:

“I’m happy with the win. I think it’s good for the team. My personal performance was not that good. I haven’t been able to throw for three weeks and that’s definitely impacted on my performance today. I think the wind conditions, if you could put it to the left of the sector, it was okay but I’m not in a position to be able to do that right now, I have to just throw and hope.”

English Olympian Ben Williams (Stoke; Aston Moore) led the triple jump with 16.14m until he pulled out with an possible injury after round three. That left the way clear for NAL’s Jude Bright-Davies (Thames Valley Harriers; David Johnson) to pass him in the final round with a PB of 16.18m. However, in the women’s event, Jahisha Thomas (Blackheath and Bromley), in her first UK-based competition of the summer, went out to 13.39m for top points for England. The current GB number 2 had four other jumps over 13m. 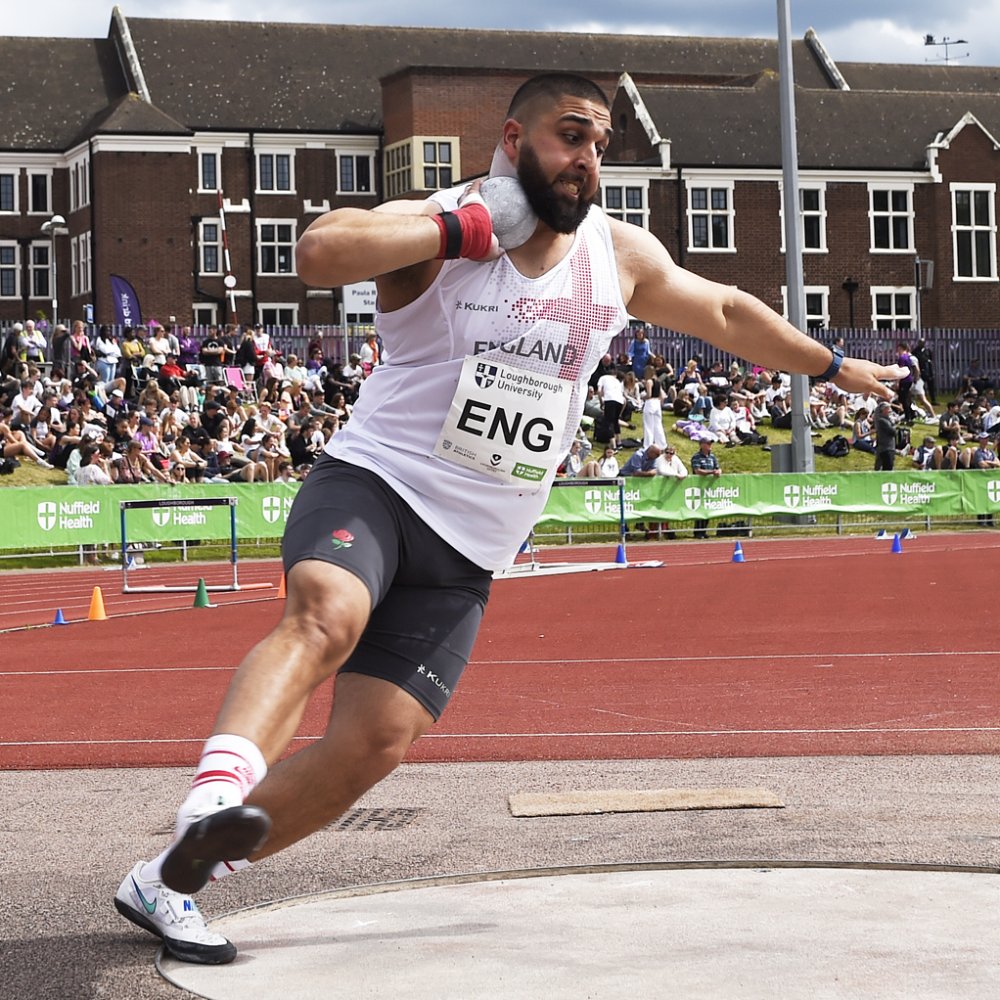 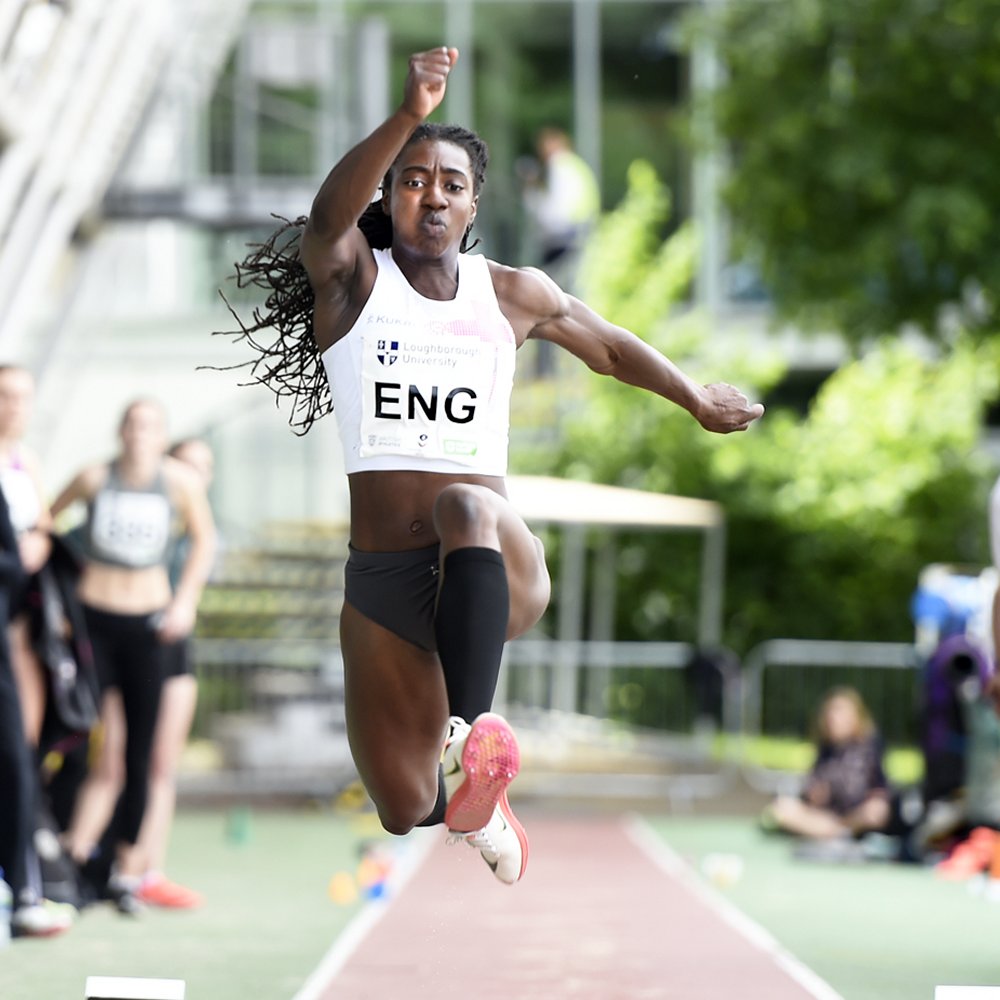 England’s Youcef Zatat – the long-term UK number 2 to Scott Lincoln – did likewise in the shot, avenging his recent defeat at the hands of Wales’ Patrick Swan with the second best outdoor performance of his career. His 18.48m in the final round was just 13cm short of his indoor best and followed an 18.42m on his first attempt.

The women’s 400m hurdles was expected to be a fairly close three-way race but England’s Hayley McLean (Shaftesbury Barnet Harriers; Chris Zah) was reasonably safe with victory in the end, clocking 57.08. That was after NAL’s Nicole Kendall (Thames Valley Harriers; Richard Holt) was a below-par fifth with 59.94 and Wales’ Caryl Granville was a DNF.

Not long afterwards, Jacob Paul (Windsor, Slough, Eton and Hounslow AC; Marina Armstong) made it an England double over the one-lap hurdles with another impressive run. Running in lane six, he stopped the clock on 49.81 – a season’s best and his third sub-50 of the month. Another England one-lap win quickly followed on the flat. Lily Beckford (Shaftesbury Barnet Harriers; Linford Christie) was closely challenged by Scotland’s Carys McAulay into the home straight before coming away to a narrow win 53.20 to 53.25. 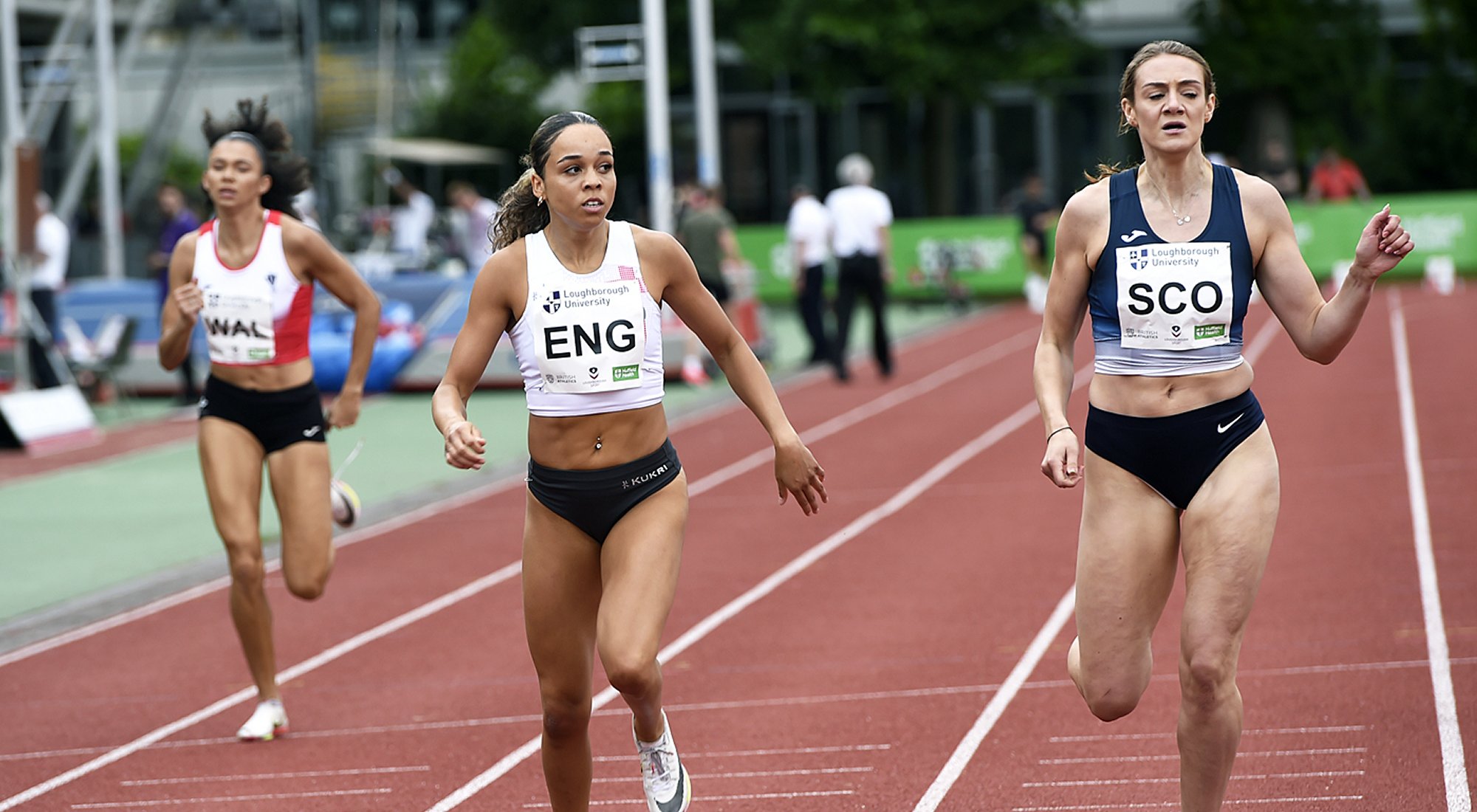 In the men’s event, England’s Kevin Metzger may have been suffering from his run in the Diamond League the day before as he placed second in 47.17. Rio Mitcham (Birchfield Harriers; Leon Baptiste) took the win for Loughborough with 46.81. James Hanson (Woking; Jake Awe) was just a hundredth outside his PB as he clocked 20.87 to win the 200m for England.

Joe Dunderdale (Sheffield and Dearne AC) was within a metre of his best in the javelin as he threw 75.47m and that proved enough for maximum points for England. Wearing the red and white in the discus was Greg Thompson (Shaftesbury Barnet Harriers; Neville Thompson), who registered 56.80m in the fourth round to finish behind only Nick Percy of Scotland, who continued his good form with 63.02m. Also second for England was javelin thrower Emma Hamplett (Birchfield Harriers; Michael McNeill), recording 50.73m – bettered only by the 54.75m of Bekah Walton (Blackheath and Bromley AC; David Turner). England’s Ben Hawkes (Worthing AC; Adrian Palmer) was more than a metre and a half over his PB with 69.88m for third in the hammer, just 2cm short of the Commonwealth qualifying standard. Wales’ Osian Jones took the win with 70.42m. 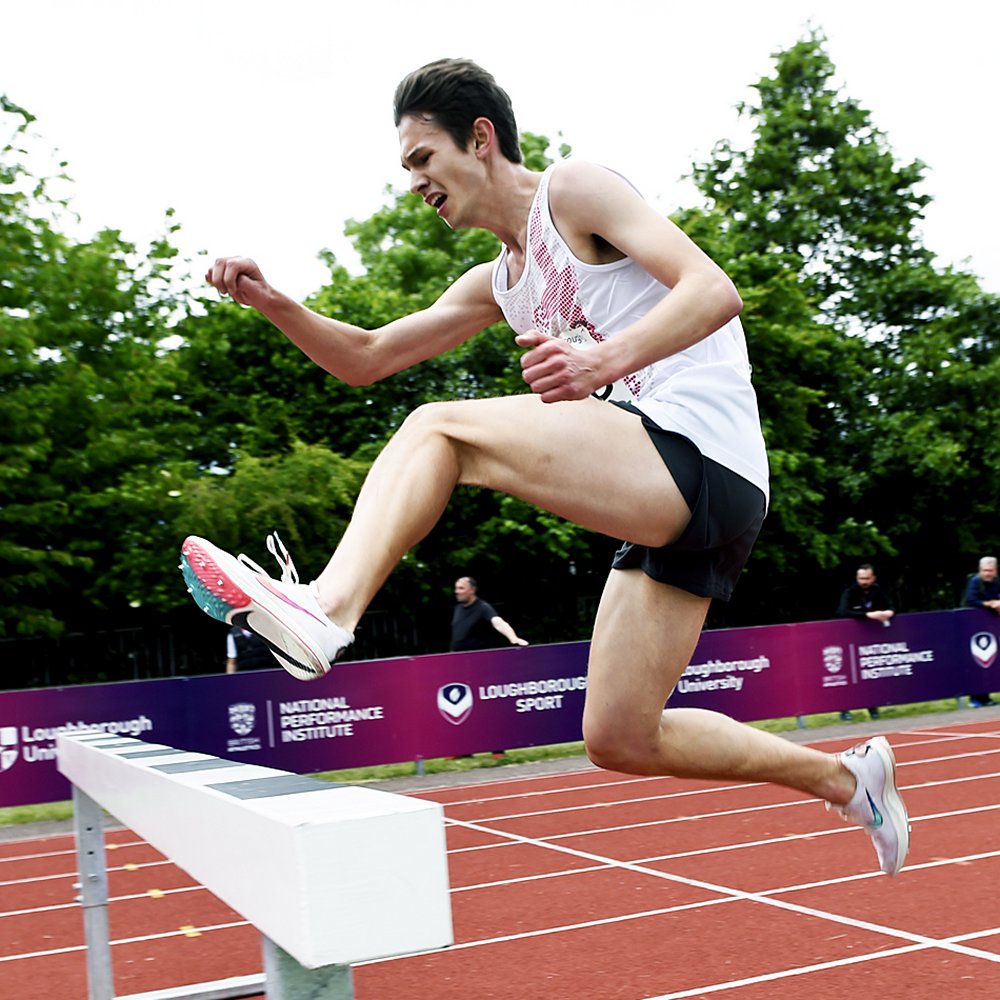 Holding the same position in England colours was Alice Hopkins (Oxford City; Laura Alleyne), who landed at 5.97m in the long jump. Wales’ Rebecca Chapman took the win with 6.04m. England’s Divine Duruaku (Notts AC; Adam Gallie), who had recently cleared a PB of 2.15m, had to be content with 2.10m for third in the high jump, won by Scotland’s David Smith with 2.19m.

Last year’s UK number 1 Jacob Fincham-Dukes (Leeds City; Zivile Pukstiene), whose last competition was an albeit heavily wind-assisted 8.45m, was another to claim good points for England in an event ironically without any wind readings recorded. His 7.56m left him second behind Harrow’s Jack Roach (7.78m).

In the guest events, a series of PBs came in the women’s 200m A-string guest race, led by Sophie Walton (Horwich; Trevor Williams), who produced a qualifier for the World U20s with 23.43. Faith Akinbileje (Blackheath and Bromley AC; John Blackie) was just 0.08 outside that standard with 23.68. Joe Ferguson (Leeds City; Lewis Samuel) was quickest of the 100m runners with a PB of 10.25, faster than the match race. European indoor pentathlon silver medallist Niamh Emerson (Newham and Essex Beagles) continued her comeback from injuries over the last couple of years. She had a solid 42.90m javelin and 13.61m shot after 14.10 in the 100m hurdles.

The day finished with the 4x400m relays – the England women finished on a high for the team with gold, and in the men’s event it was a thrilling race with Loughborough just edging out race leaders to that point Ireland in the final metre, and England right behind in 3rd. 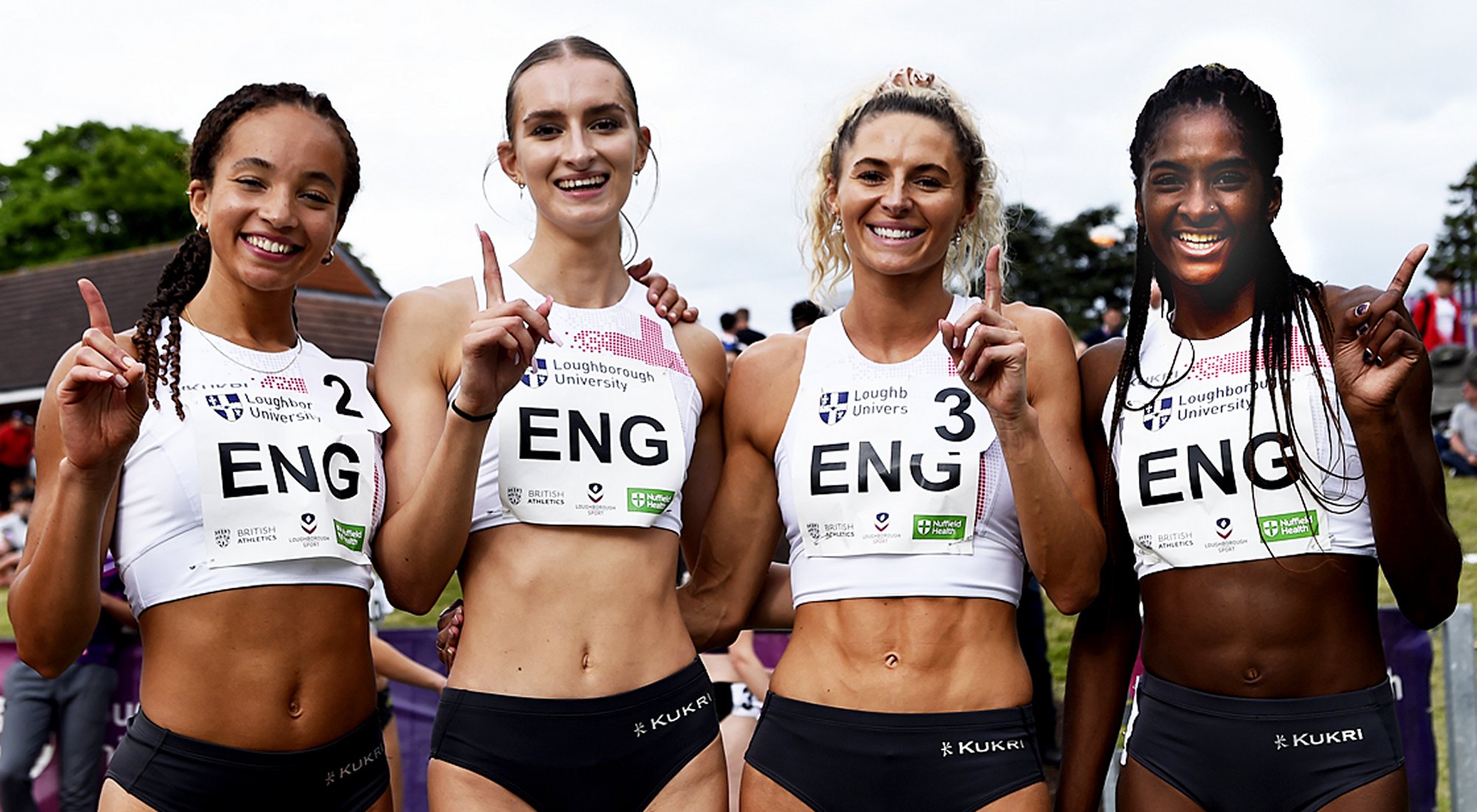 Congratulations to all our England Team who contributed to another overall win at this now regular event, plus all the hard work put in by organisers and team managers. And not forgetting our volunteer officials who worked very hard out on the track, in the field, call room, and technical team all day on an extremely tight timetable.