England’s Olympic 800m silver medallist Keely Hodgkinson was the standout athlete at the Müller Indoor Grand Prix Birmingham this afternoon, clocking the fastest indoor time globally for 20 years. Elsewhere, there was a European indoor record for Edward Faulds, as well as a plethora of PBs at UK’s premier invitational indoor event, which is a World Athletics Indoor Tour Gold meeting.

Hodgkinson, from the Leigh Harriers club, was a class apart over her four-lap race with a time of 1:57.20 – taking 0.71 seconds from the British record and moving herself to sixth on the world all-time list. Winning medals at England Athletics championships every year from 2016-19 formed part of her path to international glory yet she is still only 19 – indeed, this was the fastest time ever indoors by a teenager. Hodgkinson enjoyed a remarkable 2021, not only taking second on the highest stage of all but also winning European indoor gold. On the evidence of today’s run, she will be hard to beat at the World Athletics Indoor Championships in Belgrade, Serbia, next month.

The Trevor Painter-coached runner closely tracked the pacemaker, who went through 200m in 28.20 and 400m in 58.58. The Brit then heard the bell in 1:28.35, meaning the record was clearly on. Majestically moving away from the rest, she added the national indoor mark to the outdoor version she set in the Tokyo final last year, collecting $5000 in the process. Adelle Tracey (Guildford & Godalming; Craig Winrow) set a season’s best of 2:01.52 for fifth.

Edward Faulds (club: Rugby & Northampton; coach: James Wright) produced a strong finish to break the European under-20 400m record with 46.16. Finishing third behind American Kahmari Montgomery, the European outdoor champion also claimed a qualifying mark for the World Athletics Indoor Championships in Belgrade next month. The record had belonged to the legendary German Thomas Schonlebe for 38 years. The time was also within half a second of Faulds’ outdoor best and he is fourth best this season on the European senior rankings.

Elliot Giles (Birchfield Harriers; Jon Bigg) has established a remarkable record indoors over the last two seasons. After last year going to second on the world all-time list on the boards, his solid 2022 season went better still. Although just edged into second by Collins Kipruto, his 1:45.42 moved him to third on the world rankings for the year and he should be heading to Belgrade as a medal contender. 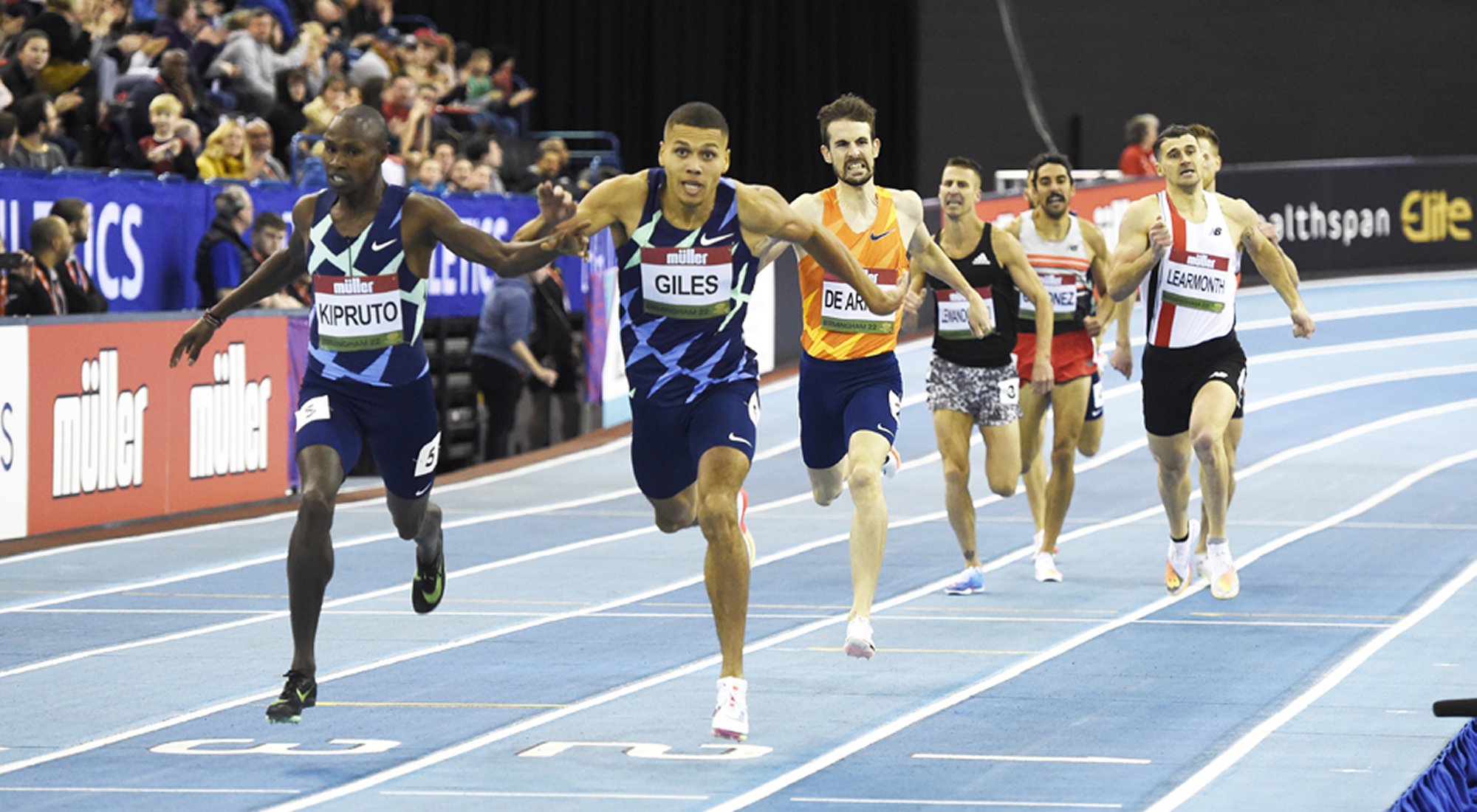 In the 1000m, Isabelle Boffey (Enfield & Haringey; Luke Gunn) continued her great early-season form to win from behind in 2:38.27 and move to fifth on the UK all-time indoor list. In her first race over this relatively rarely run distance, the European under-23 800m champion stayed off the pace of Scotland’s Jemma Reekie but stormed past over the final 100m. As well as Olympic 800m fourth-placer Reekie, Boffey took the scalp of former European outdoor 800m champion Angelika Cichoka of Poland. 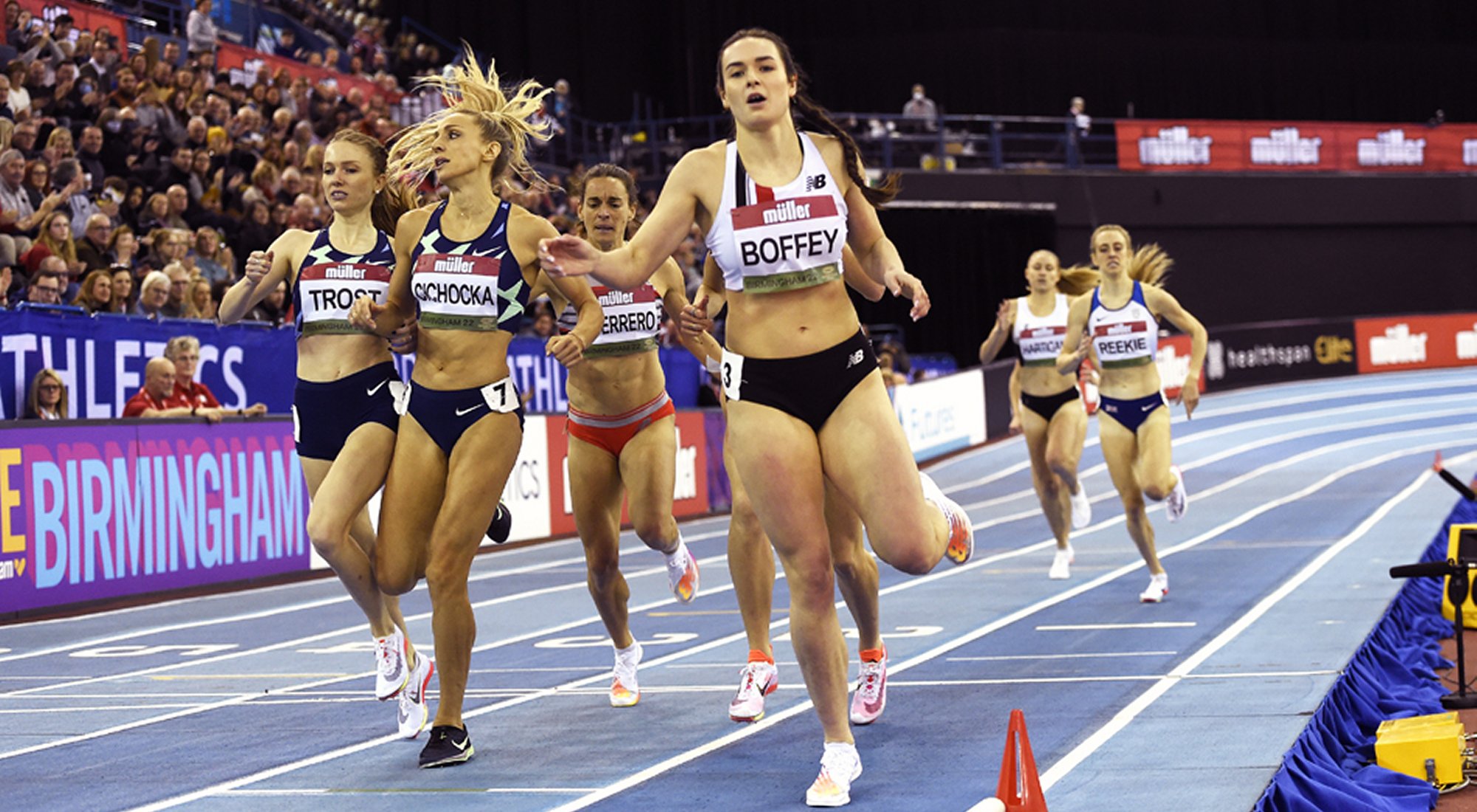 More joy came in the women’s 60m as Daryll Neita (Cambridge H; Rana Reider) ran 7.11 – a time beaten by only three British athletes in history and good enough to closely challenge five-time Olympic champion Elaine Thompson-Herah. Although the Jamaican just came through at the end in 7.08, Neita took four hundredths from her PB set earlier this month and she is now sixth best in the world this year. Amy Hunt (Charnwood; Joseph McDonnell) was seventh in 7.64 as she pulled up before the line. Both Neita and Hunt already had the World Indoors qualifier.

In the men’s event, run as semi-finals and finals, Charlie Dobson (Colchester H; Benke Blomkvist) twice set a lifetime best as he ended up with 6.59 for fifth. He clocked 6.62 to win his semi-final and secure the mark for the World Indoors. Then, in a final won by Noah Lyles in 6.55, he moved to the top of the UK rankings for the season. Matching Dobson’s time in sixth was Andrew Robertson (Sale H), for whom that was a season’s best. Meanwhile, going out in the heats were Oliver Bromby (Southampton) with 6.72, Jona Efoloko (Sale H; Clarence Callender) with 6.72m and Nethaneel Mitchell-Blake (Newham & Essex Beagles) with 6.74.

Borthwick shines in the field 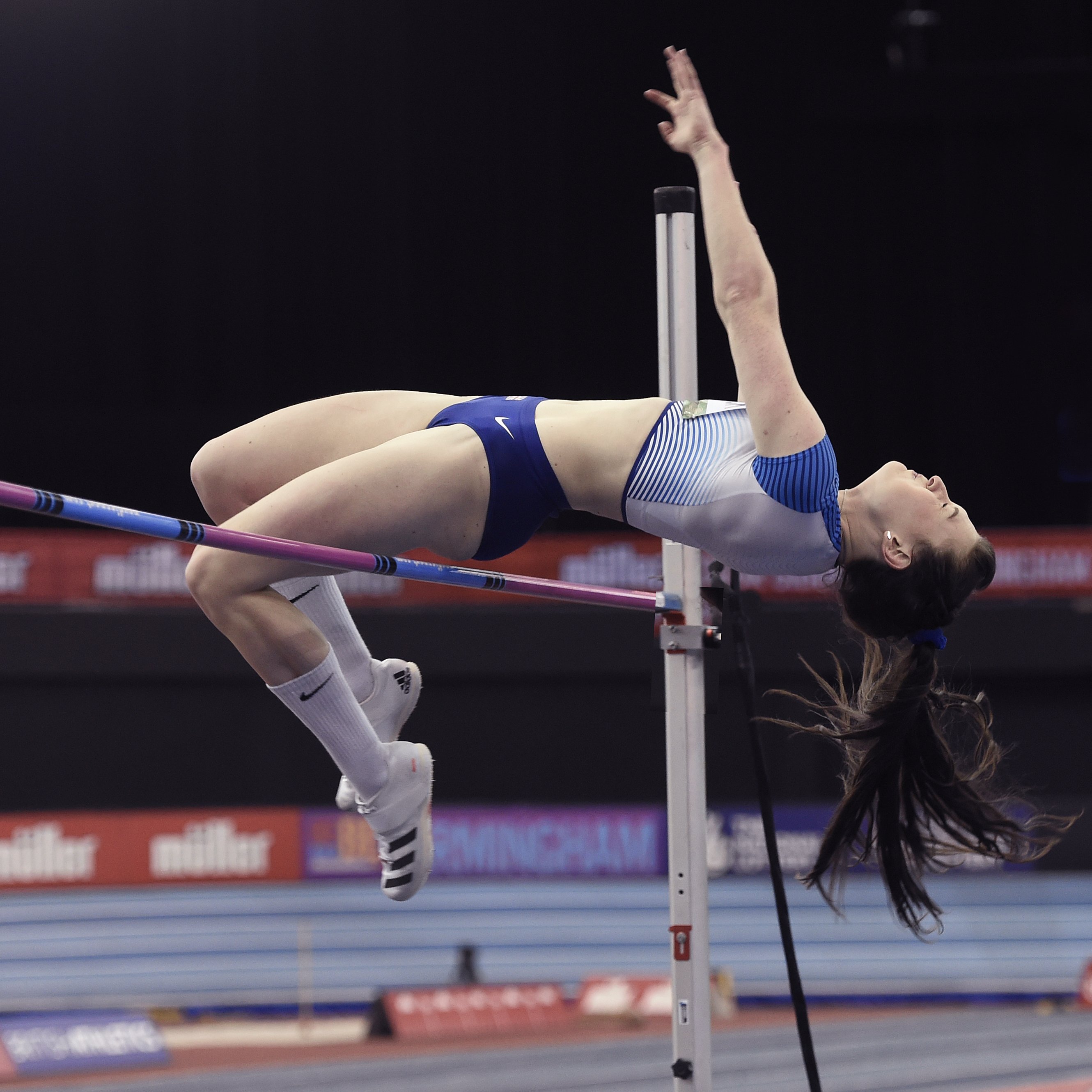 In the women’s high jump, it has been Emily Borthwick (Wigan & District; Fuzz Caan) who has made a great leap forward this year. However, she was fifth with 1.84m and Laura Zialor (Marshall Milton Keynes; Jade Surman) became the latest English jumper to set a PB. Her 1.91m added a centimetre to her best and was good enough for third, matching Olympic champion Mariya Lasitskene in second, and behind winner Eleanor Patterson (1.97m). Zialor had first-time clearances all the way, too, before three failures at 1.94m.

Abigail Irozuru (Sale; Aston Moore) was the best of the three English athletes in the long jump. The Olympic finalist was fourth with a season’s best 6.41m behind winner Khaddi Sagnia of Sweden (6.70m). Lorraine Ugen (Thames Valley; Dwight Phillips) was fifth with 6.38m. Jazmin Sawyers (City of Stoke) was a place behind in 6.28m.

Behind world record-holder Armand Duplantis (6.05m), Harry Coppell (Wigan & District; Scott Simpson) will have been disappointed with his pole vault competition. The UK outdoor record-holder was seventh with 5.31m.

European indoor 3000m champion Amy-Eloise Markovc enjoyed some highly successful under-distance work in the 1500m. The athlete who represented Britain over 5000m at last year’s Olympics set a PB (indoors or outdoors) of 4:08.68 for fourth, also sneaking inside the mark required for Belgrade. It was Ethiopia’s Dawit Seyaum who took the win with 4:04.35. Holly Archer (Cambridge & Coleridge; Andrew Parmenter) was ninth with a season’s best 4:15.33.

Although it was no surprise that the dominant American Grant Holloway went away for the 60m hurdles win in 7.41, England’s world indoor champion Andrew Pozzi (Stratford upon Avon; Benke Blomkvist) crossed the line second with a season’s best of 7.59. However, it was team-mate David King (City of Plymouth; Tim O’Neil) who will be happier with his day’s work as he set a PB of 7.63 for fifth. Both already had the time for the World Indoors. In a women’s 60m hurdles final won by Netherlands’ Zoe Sedney with 8.02, English multi-eventer Holly Mills enjoyed a run-out in one of the events of the indoor pentathlon. She was just seven hundredths off her PB with 8.24 in sixth.

The men’s 1500m saw a trio of athletes from the Brighton Phoenix club produce mixed results for the English athletes. Behind winner Abel Kipsang of Kenya (3:34.57), it was a great day for George Mills (Brighton Phoenix), who clung on to the back of the lead group on his way to fourth. His 3:36:03 beat his best both indoors and outdoors. Charlie Da’Vall Grice clocked 3:39.59 for eighth and Archie Davis (Joel Kidger) was 10th in 3:44.32.

Jessie Knight (Windsor, Slough, Eton & Hounslow; Marina Armstrong), who went to the Olympics in the 400m hurdles, is taking the chance to compete on the flat this indoor season. Already in possession of the mark needed for Belgrade, she was fifth here in 52.35.