There were more titles and medal positions decided on the second day of the England Athletics Senior and Under 20 Indoor Combined Events and Race Walking Championships. With some great competition throughout the day the athletes carried on the excitement levels that had been seen on day one.

Both men’s combined events competitions were held over the two days and after the U20 women’s pentathlon was held on the Saturday it was the turn of the Senior Women to have their pentathlon championship on the Sunday.

It was a first national title for John Lane (Club: City of Sheffield and Dearne AC, Coach: Toni Minichiello) who continued where he left off at the end of day one to strike gold in the Senior Men’s heptathlon.

He imposed himself on proceedings from the first event of the day as 8.25 (920pts) was quickest of all in the 60m hurdles. At this point Howard Bell (Club: Edinburgh AC, Coach: Iain McEwan) remained second with a 8.46 (869pts) and Andrew Murphy (Club: Kilbarchan, Coach: Colin Sinclair) moved back into the medal positions with his 8.42 (879pts).

The pole vault saw four athletes clearing 4.90 (880pts) – John, Andrew, and Ben Gregory (Club: Birchfield, Coach: Aston Moore) being three of them – which meant John and Andrew retained the top two places at this stage. And with Howard scoring 731pts with his 4.40 he was still in a medal position but Ben, the Birchfield Harrier, was now just 25 points off the medals going into the 1000m.

There were plenty of changes to the medal positions on the leader board throughout the day in this competition. But at the end of it all it was Kate O’Connor (Club: Dundalk St. Gerards, Coach: Francis O’Hagan) who came as champion.

It was then Alice Hopkins (Club: Oxford City, Coach: Marcia Marriott) who moved into the lead after the high jump as she cleared 1.71 (867pts) to reach 1838. This moved her ahead of the Harrow athlete who (1.65 / 795pts) who was now joint second with Sarah Connolly (Club: North Down /Harrow, Coach: Laura Turner-Alleyne, 1.71 /867 pts) with both on 1819pts. While Kate still lay fifth her 1.74 (903pts) clearance was the best of the competition and moved her into contention. 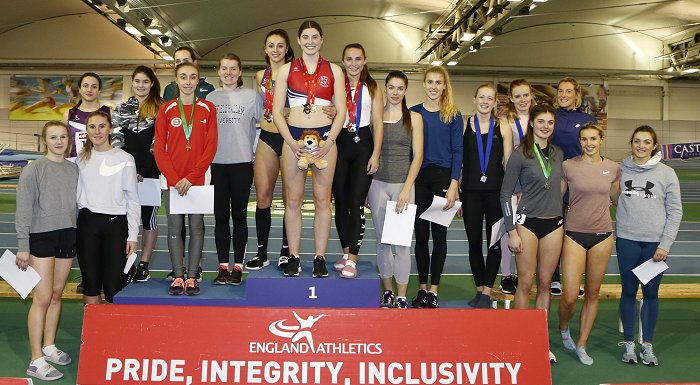 At the end of Day all was tight at the top of the U20 men’s competition. But it was Jack Turner (Club: Exeter Harriers, Coach: Kevin Skinner) who progressed from third place to take the title.

His day got off to a good start as his 8.26 (917pts) 60m hurdles was fastest of all and moved him from second to third. At this point Scott Brindley (Club: North Ayrshire AC, Coach: Mark Stringer) was in the lead and his 8.42 (879pts) maintained a gap of 16 points with Joel McFarlane (Club: Arbroath & District Athletics Club, Coach: Ian McFarlane) third after his 8.75 (802pts).

With the pole vault dealt with on day one it was now the high jump and an impressive 2.04 (840pts) carried Jack back to the top of the leader board for the first time since the shot put. A clearance at 1.89 (705pts) clearance by Scott kept him not only in second place but also on track for an impressive score as a 1.83 (653pts) meant that Joel was also scoring well.

A 2:50.06 (765pts) performance in the 1000m took Jack to the title and a 5329 point total. But while the Scottish duo could not make a dent in his lead there was a significance to their performances. Scott came home in 2:51.79 to earn 747 points and reach 5192, with Joel recording 2:45.35 for 815 points and a 5113 total performance. The significance of these marks being that the previous best performance by a Scottish U20 had been the 5,099 previously held by Joel – so not only was a new Scottish record set, but two athletes bettered the mark that was set last year in the same competition.