With places for the World Indoor Athletics Championships in Belgrade on offer, competition at this year’s UK Athletics Indoor Championships was understandably intense. So it was great to see England’s athletes emerge amongst the gold medallists in Birmingham with encouraging regularity, not to mention the string of championships bests along the way. 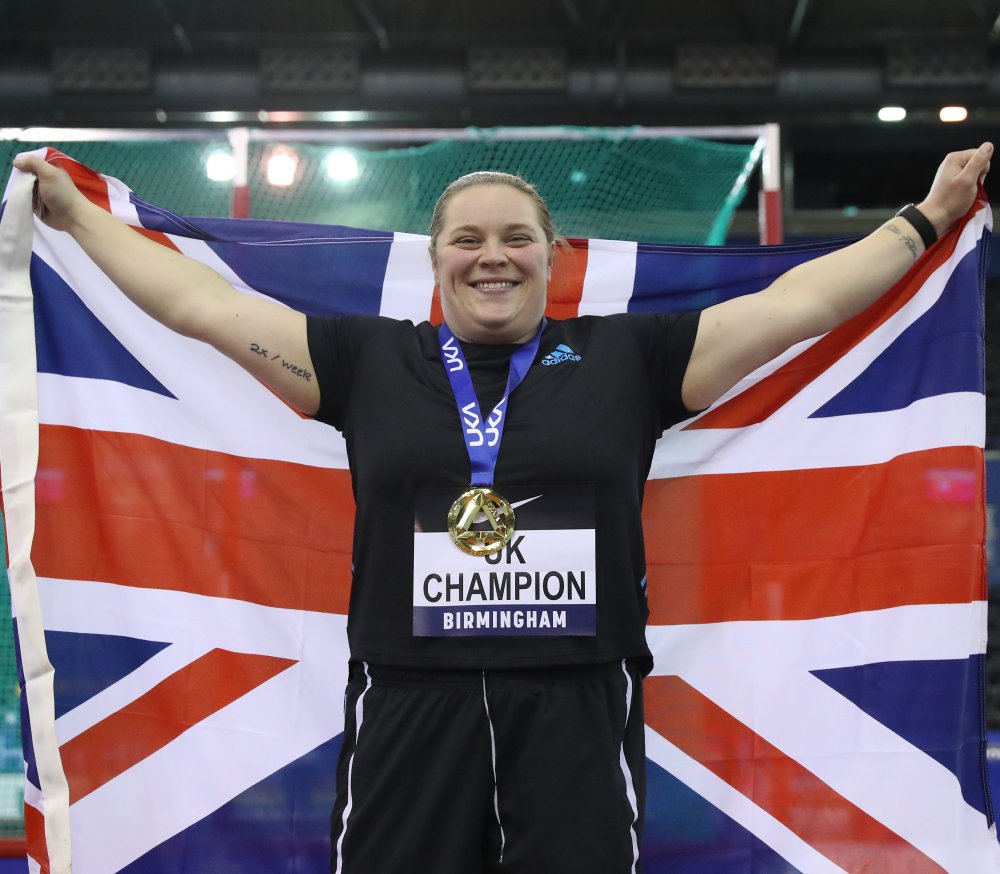 An opening throw of 18.82 in the women’s shot from Sophie McKinna (Great Yarmouth, Mike Winch) confined Judy Oakes’ 1996 championships record to the history books. The reigning champion had confidently predicted she could break the British record and while that will have to wait for another day, it’s easy to understand why McKinna is looking forward to what she describes as “a very busy summer,” three of her throws way beyond the World Indoor qualifying standard.

“I set my stall out before today saying I’d break the British record and I got the closest I ever have with a championship record,” she said. “I now have the worlds to look forward to so I am hoping the British record will go there. I am creeping ever closer.” 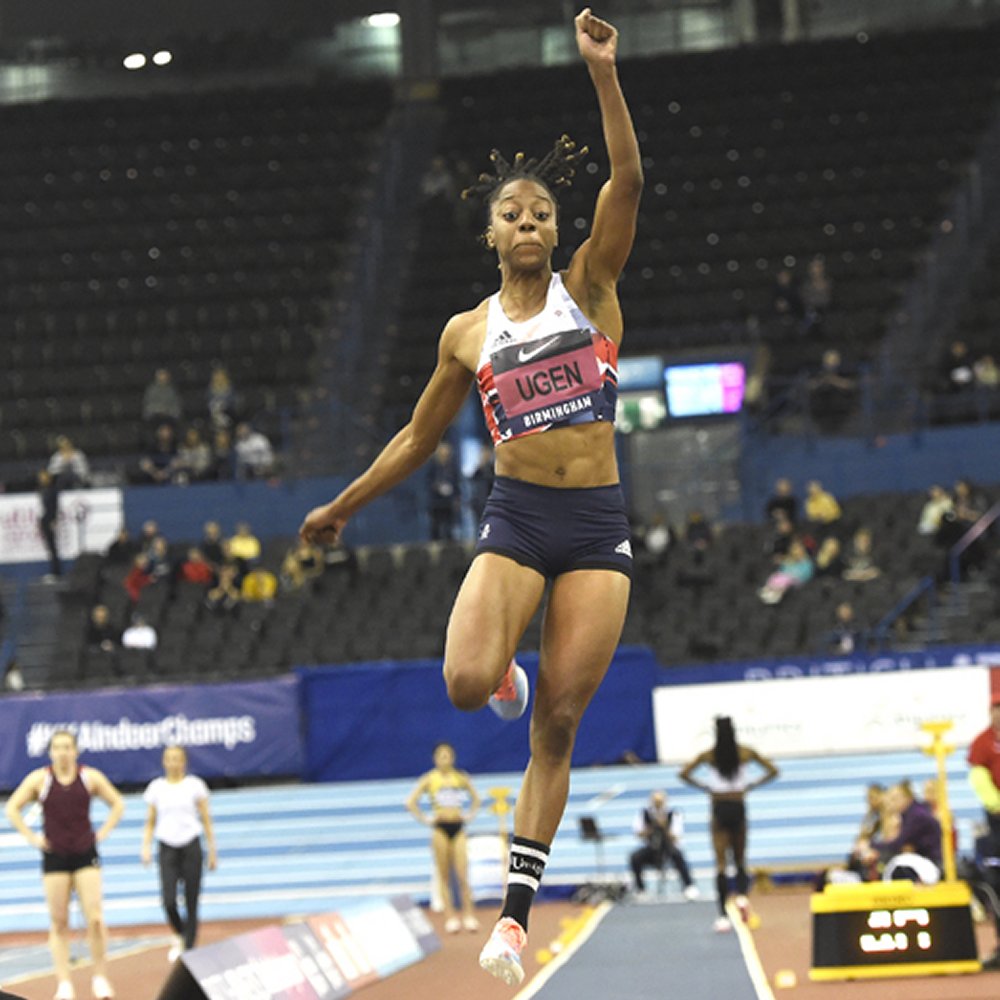 With the national indoor record holder, Lorraine Ugen (Thames Valley, Dwight Phillips) the current England champion, Jahisha Thomas (Blackheath & Bromley), Olympian Abigail Irozuru (Sale Harriers Manchester, Aston Moore) and a European silver medallist, Jazmin Sawyers (City of Stoke) all in the field, the women’s long jump was definitely an event all about strength in depth. Sawyers (6.41 opener) and Thomas (6.43 second round) traded the lead early on before Ugen finally found her form after two fouls to hit 6.52. And then her fourth round 6.75, which is equal sixth on this year’s world lists and also equalled the championship record effectively put an end to any debate as to where the gold was heading as Thomas could only respond with 6.45 and Sawyers 6.43.

“I feel good,” said Ugen. “I needed to redeem myself from the Muller Grand Prix performance last week. I know that my runway was dodgy last weekend and this week I completed my jumps well. I’m off to Madrid for the final continental tour gold meet and then it’s about getting a decent training block in before Serbia [World Indoors].”

Also getting in on the championships record act was Ella Rush (Amber Valley & Erewash, David Feeney) who produced a massive PB of 6.34 in the long jump on her way to winning the women’s pentathlon with 4365pts. It was a great performance from the 17-year-old, who finished the competition with an equally impressive gun-to-tape 2:19.60 800m.

On the track, the women’s 400m was a fabulous race with the first three crossing the line together. The photo finish and also a super lunge for the line confirmed it was Jessie Knight (Windsor Slough, Eton & Hounslow, Marina Armstrong) who had prevailed in 52.37, fractionally ahead of 800m British record holder Keely Hodgkinson (Leigh Harriers, Trevor Painter) who clocked 52.42. Knight, the winner in 2020 said:

“It was an incredible race. I have never done that finish before but I really knew it was to be a close race after yesterday’s hard heats. We all had tired legs so I thought it would it would be a blanket finish.”

For Hodgkinson, the Olympic silver medallist, these championships were all about working on her speed for the four-lap race in Belgrade and her three PBs in two days suggests there could be something very special on the cards. “Blocks are a lot harder than they look,” she laughed, adding she’d love to be involved with the relay team.

“I’d like to run a little bit faster if I’ve got a chance of defending my title from 2018,” he said. “I’m in good shape, happy to be racing as always and we’ll see how we go. The indoor season so far has been good and I’m still finding my feet a little bit. I had a slight interruption after my season opener.”

“I looked up at the screen and saw Guy (Learmonth) was right behind me, so I slowed down and forced him wide round the final bend and then I managed to put in another gear and went away,” he said, revealing a fascinating insight into indoor racing. 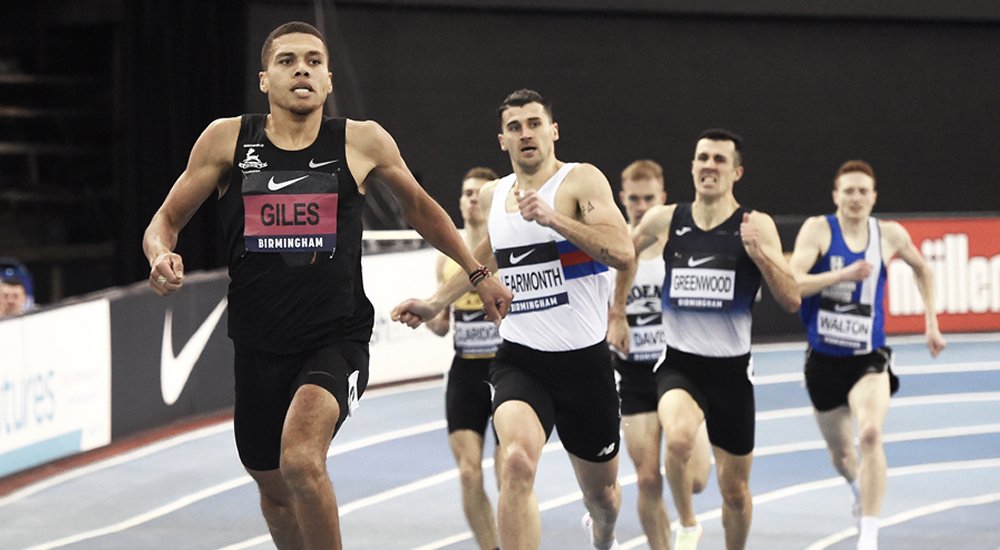 Tactics of a different sort, came in the men’s pole vault which saw Harry Coppell (Wigan & District, Scott Simpson) wait for the entire field to go out before he came in and won with his very first jump at 5.33. He then moved the bar to 5.50, a height he cleared comfortably before calling it a day.

*The winner of the men’s 3000m walk was Christopher Snook (AFD, Verity Snook) 12:27.2, while Lewis Church (Tonbridge AC, David Hull) led a club one-two in the men’s heptathlon as he beat clubmate Harry Kendall (Tonbridge AC, David Hull) 5488 to 5441. Last season’s European indoor champion Amy-Eloise Markovc (Wakefield) won the women’s 3000m in 9:04.26, the final 2:49 sealing the deal. She has the qualifying time so will be on the plane. Ben Higgins (City of Sheffield and Dearne, Stewart Marshall) won a rough men’s 400 in 46.82 in a race that saw the runner first across the line disqualified for cutting in too early. Toby Harries (Brighton Phoenix, David Sadkin) won the men’s 200m in 20.99. Samuel Khogali (Woodford Green & Essex Ladies, Mike Bennett) found himself in the form of his life to win the men’s long jump thanks to his second-round effort of 7.54. The British Universities bronze medallist followed that up with a 7.52 third round jump, a distance that would have also won him the gold, which was his first-ever national title.

Day one is always about the 60m, and the drama that creates given it’s an event in which fine margins are usually order of the day. But tell that to Cheyanne Evans-Gray (Croydon, Nat Senior). She was clearly in no mood for the photo finish to be needed, powering to a 7.25 win the women’s final, fully 0.06sec clear – a huge margin at this level, clear daylight between her and the chasing field. “I’m not surprised, and I trained for this,” said Evans-Gray. “My weakness is my top end speed, so I’ve been working a lot on that and I feel like I’m in the shape that I was in two years ago. I’ve changed my coach so that’s a big difference.”

Zac Shaw (Cleethorpes, Leon Baptiste) is another athlete definitely in shape as he flew to a British record of 6.98 in the T12 category in the men’s Mixed Ambulant 60m sprint. It earned him a bonus $2500 but more importantly saw him dip inside the magical seven-second barrier for the first time ever. It was his second national record in a week (he ran 7.01 last weekend at the Müller Grand Prix), and it certainly sets him up for what promises to be a memorable season. “I’m not the type of athlete to get animated and emotional but that’s the first time I’ve crossed the line and showed a bit of emotion,” said Shaw. “I’m being deadly serious that I wasn’t thinking of running as I felt so much pressure, stress and anxiety. I want to get that consistency now and I want to win a medal at the Commonwealths and enjoy this year.”

Also in great form was Sophie Hahn (Charnwood, Leon Baptiste), in the women’s T38 60m. The four-time Paralympic champion was imperious as ever with a magnificently smooth looking 8.11.

Earlier, in an action-packed programme the first woman to book her ticket to the Worlds was Megan Marrs (Windsor Slough, Eton & Hounslow, Alex Newnwu) in the women’s 60m hurdles. She was the only athlete in the field who had pre-qualified thanks to her 8.16 back in 2021 but it was by no means a done deal in what can be a notoriously difficult event to predict thanks to those barriers. “The hurdles are five opportunities to go wrong,” she laughed, clearly relieved it all went so well. Indeed, she looked fantastic in the final 20 metres after a slow start and was rewarded with 8.15, adding the title to the one she took in 2018.

“I knew I had the qualifying time, so I knew I just had to win. Today was going to be the end of the indoor season or the start of the preparations and it was the latter, so I now need to talk to my coach in preparing for Belgrade,” she added.

It also all went to form in the men’s 3000m as Marc Scott (Richmond and Zetland) hit the front with three laps to go, his final kilometre occupying just 2:24.17. The sub 13-minute 5000m runner indoors this season took the gold and that all-important auto slot for Belgrade in 7:53.35 from Jamaine Coleman (Preston Harriers) who ran 7:53.92 and who has the qualifying time from an earlier race this season in Boston, USA.

“I wanted to control it out there and ensure I booked my ticket on the plane,” said Scott. “It can get really messy with 16 guys on a 200m track indoors so I was keen to stay out of trouble at the front. I know I have a good kick at the end, so I knew I had it in me.”

The women’s 1500m was also a straight final with Adelle Tracey (Guildford and Godalming, Craig Winrow) kicking away for a comfortable win in 4:13.14.

Seun Okome (Sale Harriers Manchester, Keith Hunter) secured gold with a fifth-round leap of 16.13 in the men’s triple jump to overhaul the early leader, Tokyo Olympian Ben Williams (City of Stoke, Aston Moore) whose 16.05 earned him the silver medal. This was Okome’s first time beyond 16m and the longest jump in the country for 2022. In his final year in the sport, Nathan Douglas (Oxford City, Aston Moore), No.3 on the all-time list thanks to his 17.64, Olympian and a European Indoor medallist as far back as 2007, signed off with an eighth place 15.07 with his only valid jump coming in the second round.

Meanwhile, Naomi Metzger (Trafford, Tom Cullen) was dominant in the women’s triple jump, taking the title by more than a metre. The U23 national indoor record holder with 14.05 jumped 13.81 on this occasion but four of her five other efforts were all within 10 centimetres of that mark meaning the gold medal was never in question.

It was the same story for Scott Lincoln (City of York, Paul Wilson) in the men’s shot put as he peppered the 19-metre mark with just about every throw. He took the gold thanks to a 19.52 in the fourth round.

Photos by Mark Shearman
Photo of Sophie by Getty Images