Day two of the England Athletics Under 20, 17 & 15 Championships perfectly illustrated the amazing strength-in-depth the sport is currently enjoying. Ask any medallist for evidence of that!

The 200 metres, for instance, provided a hint of what would happen time and time again throughout the day as a series of sensational qualifying performances in the one-lap sprint followed on from each other in quick succession.

‘This will be the story of the day,’ said one of the England coaching team nodding towards Success Eduan (Sale Harriers, Anita Richardson) who had just run close to 24-flat in the heats of the U20 women’s 200. Perhaps it had been the the best run of the morning session, but such was the quality of every race it was hard to say definitively. The final, however, did appear to confirm that opinion as Success powered to a personal best indoors or out of 23.44, working hard off the final bend for the win. How good was that time? Well, it was faster than the time she ran to win the Europeans outdoors, so certainly a contender for best performance of the day! 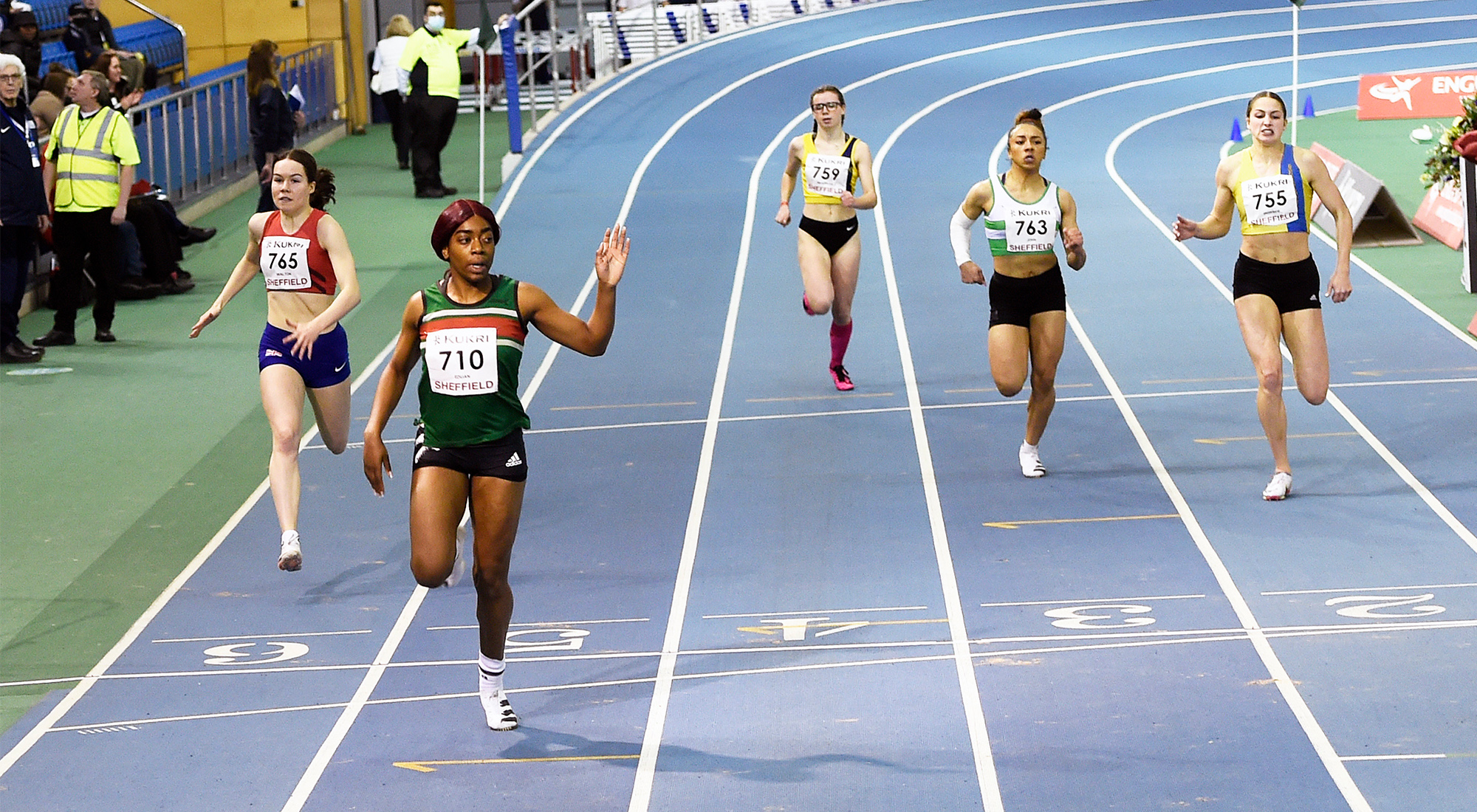 Jaiden Dean (City of Norwich, Brian Hopkins) will have to say about that however as he clocked a British record of 7.76 in the U17 men’s 60 hurdles. And he needed to run that fast as Noah Hanson (NEB, Carl Graham) ran him all the way to the line, his 7.84 elevating him to Number 2 on the all-time list. It was the last race of the day and the perfect way to end an incredible weekend.

But before his superb race there was the U17 women’s 200. It was easily as exciting and in fact a touch closer as Renee Regis (BFT Track Academy, Tamunonengiye-Ofori Ossai) overcame a poor start to haul back Faith Akinbileje (Blackheath and Bromley, John Blackie) with her final stride to win 23.93 to 23.96, both massive PBs and the second gold medal of the weekend for Renee who had won the 60m on Saturday.

“I prefer the 100,” said Renee afterwards, laughing about how she had struggled with the bends. “I was really tired then saw Faith in front of me so really dug deep. That was just my second 200 of the year [the first being her heat] so I’m happy with that and now I’m hoping for sub 11.3 this summer,” she added.

But of course, it would be difficult to ignore Wales’ Nell Desire’s (Cardiff Archers, Lisa Wadden) who won the U15 girls’ 200. She had jogged a 25.66 heat earlier in the day, but nobody was quite ready for her 24.39, the second fastest of all time and a championships best performance. Behind her, almost unnoticed but certainly a name to watch was 11-year-old Aliyah Afolabi (Cardiff Archers, Lisa Wadden) who flew to an impressive 25.68. 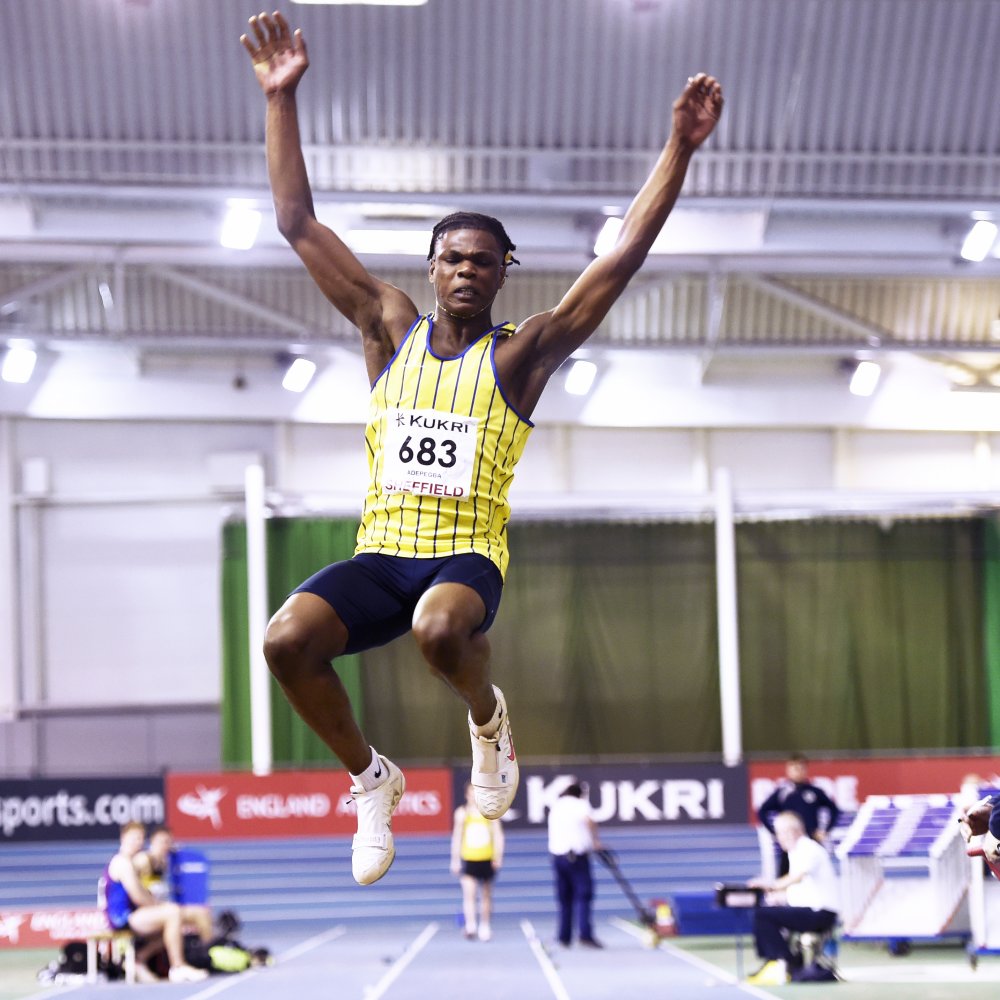 And then there was Scotland’s Dean Patterson (Glasgow School of Sport, Norrie Hay) who went one better and equalled the British record he had set just a few days earlier in the U17 men’s 200m. Needless to say his time of 21.40 also broke the championships best. Fellow Scot Libby White (Ayr Seaforth, David Watson) followed suit in the U17 women’s triple jump with a second round 12.63, an improvement of 22cm on her own British record and the second furthest jump ever indoors or out.

There was barely time to draw breath as all this was unfolding, the action coming thick and fast all day long. Athletes in the U20 men’s long jump, for instance, started peppering the seven-metre mark from the very first round. In the end it was Oreofeoluwa Adepegba (Basildon, Vespa Ellis) who took the title with a second round 7.30, just 3cm shy of his outdoor best.

And in fact, tight margins were very much order of the day, although few events were quite as close as the women’s U20 shot. Three centimetres was all that separated the top three for much of the competition – 12.72, 12.71 and 12.69 after the fourth round. Then, going into the final round Omolola Kuponiyi (Chelmsford), outside the top three at that point secured the title thanks to her 12.89, although Cleo Agyepong (Blackheath and Bromley, John Hillier) wasn’t going to let the gold go easily and reduced the margin to just – you guessed it – 3cm with her final throw of 12.86 to fall just short. 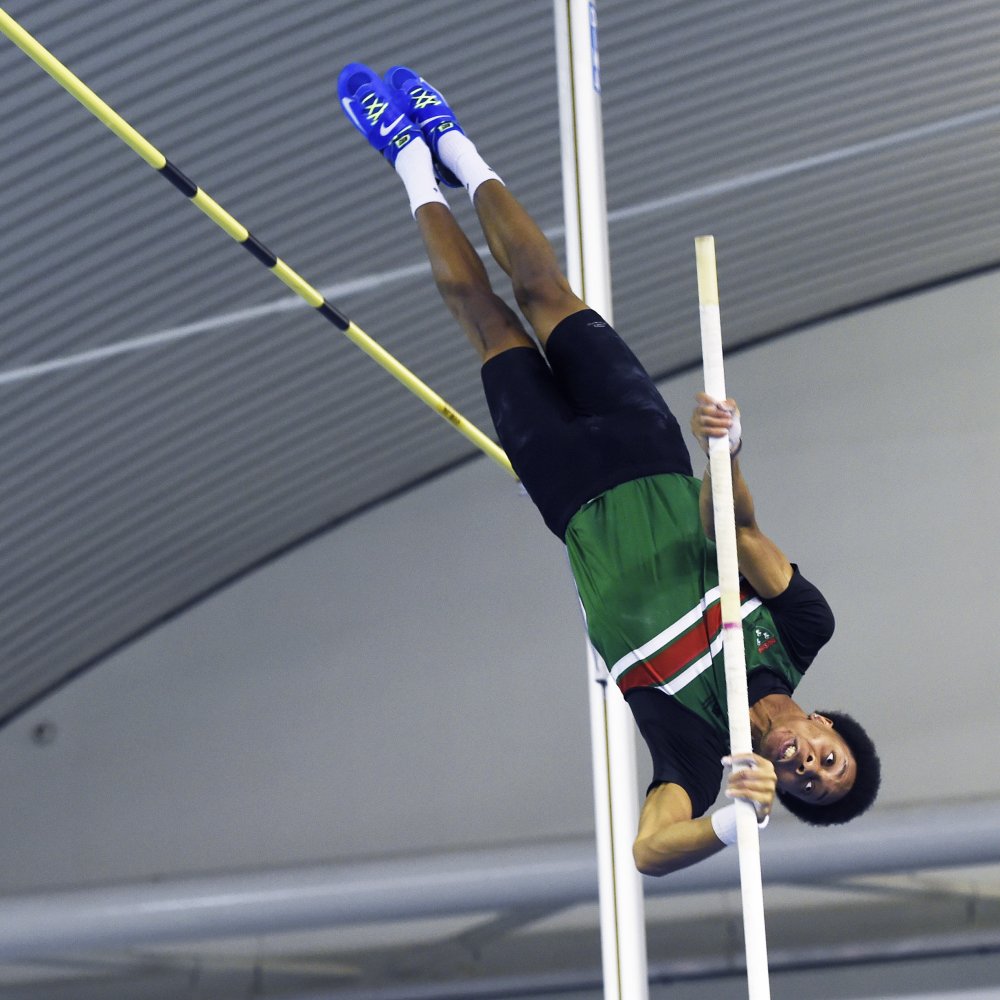 Earlier, an opening throw of 14.93 for Alastair Brown (West Suffolk) secured the U17 men’s shot title for the southern champion in a slightly more straightforward final. The winner of the U15 title in 2020 when the championships last took place, Alastair followed that up with a massive 15.29 in the final round to really stamp his authority on the competition. While in the U15 boys’ competition which took place at the same time, Joseph Perkins (Gateshead, Alex Giles) won thanks to his 11.55, after a solid series of throws.

In the busy morning schedule Luke Ball’s (Yate and District, Jeremy Dale) third time clearance at 2.04 was enough to secure him the title in the U20 men’s high jump. He had three good attempts at an indoor personal best of 2.06 but had to settle for the earlier effort on this occasion. Lazarus Benjamin (Sale) was equally dominant in the U20 men’s pole vault with a soaring clearance at a personal best 5.10. He bowed out at 5.20 with a very close first attempt.

The silver medallist from the U15 boys’ high jump on Day One, Luke Pichler (Blyth RC, Daniel Njai-Rowney) added a gold medal to his collection with a 5.99 in the U15 boys’ long jump. He led early on before a 5.87 from the year’s UK No.1 going into the competition, Nathan Mugoti (Burton) looked to have stolen the gold, but Luke’s fifth-round effort, also the longest in the country in 2022, proved too much. He then won the U15 boys’ 60 hurdles in 8.55 to cap an amazing weekend.

In fact, the 60 hurdles continued the swift theme the 200 metre sprinters had set earlier in the day along with Jaiden Deacon in the U17 men’s 60 hurdles, Lia Bonsu (Croydon, Paul Weston) was in record-breaking shape, stopping the clock at 8.50 in the U17 women’s 60 hurdles for the fifth fastest time ever. And that was just in the semi-final! In the final she was even better, clocking 8.45, to move to equal second on that ever-changing all-time list. And continuing the business of rewriting those lists was Mia McIntosh (Dacorum, Jake Awe) who clocked 8.22 in the U20 women’s 60 hurdles to also go second equal ever.

However, more often than not the sprint hurdles are all about blanket finishes and spectators definitely needed a sharp eye to work out who had won the U20 men’s 60 hurdles as six, yes six broke eight seconds. In the end the photo finish determined it had been Abdulsamad Sanusi (NEB, Nate Senior) who prevailed, a superb dip securing him the gold medal as he clocked 7.86 to win by 0.03sec.

Finally, distance running tends to be a bit more low-key in this event given the popularity of cross country, but tell that to Miles Waterworth (Brighton Phoenix, Bruce Warren) who won the U17 men’s 800m in 1:56.32. He seized control with 400m to run (59.8) and kicked away for a comfortable looking win. Superb progress for an athlete just fifth in his heat outdoors last summer, perfectly illustrating how indoor competition can help athletes move to the next level. The U20 men’s and women’s races were similar in that it was all about a gun-to-tape effort for the winners as Beatrice Wraith (Hertford & Ware, David Rice) did just that in the women’s race for her 2:09.40 victory and in the very next race Jake Minshull (Coventry Godiva) used exactly that tactic to take gold in 1:52.91.