While the rest of the country has been on pause for two years, clearly the next generation of GB Olympians haven’t been just sitting about. Instead, it’s obvious they’ve been training and working hard, as each and every one of the national titles on offer was won in some style. Performance and power were very much order of the day in Sheffield.

And leading the way in that department, as ever on the first day of an indoor championship, was the 60 metres. Given the way the favourites had eased their way to their respective finals it promised much and in reality, actually delivered even more! Expert analysis after the semi-finals had the girls’ events as the races to watch and so it proved as first up was Wales’ Nell Desire (Cardiff Archers, Lisa Wadden) who blasted to a 7.53 clocking in the U15 girls’ final, good for fifth on the UK all-time rankings. There was barely time to draw breath before Renee Regis (BFT Track Academy, Tamunonengiye-Ofori Ossai) flew to a lifetime best of 7.46 in the U17 girls’ event – one better as it was the fourth fastest time ever! Lastly, but in no way least was the U20 women’s final which was simply sensational – way too close to call in real time. In the end the photo-finish concluded it was Joy Eze (Gateshead), injured for the first part of 2022 who was the winner in 7.36, exactly the same time as England senior and U20 100m champion Nia Wedderburn-Goodison (Harrow). Both now share the 12th fastest time ever slot. Wow, the future looks good.

Of course, the boys weren’t exactly hanging about and it was fast-starting Dante Legister (Camb H, Mike Bond) who scorched to a PB-equalling 6.85 well clear of the field in the U17 men’s race. Finally, to conclude a hectic half hour of sprinting the men’s U20 race was won by Michael Onilogbo (NEB, Carl Graham) who flew to 6.72, even having time to steal a look across on the line as he did so.

But it was the winner in 2020 as an U17 and now the women’s U20 champion thanks to her 3.90 clearance, pole vaulter Gemma Tutton (Lewes AC, Richard Pilling) who perfectly summed up what the weekend was all about. As for her own competition, she was pleased to find some form again after an injury not to mention rediscover her love for the sport.

“It was a really, really fun competition and because we haven’t had an indoor championship for two years it was really special and everyone even wanted their rivals to do well as well.

Now I’m really excited about the summer and what that’ll bring,”

she said, highlighting the U20 Worlds as her main goal for 2022.

In the men’s U17 triple jump, the northern champion Jack Hilton (Wigan and District, Carl Foster) turned his fourth place in the U15 long jump two years ago to gold in this event thanks to an early 14.07 leap. And in the action-packed morning session the two other gold medals on offer went to Isabella Turner (Dacorum) who bowed out at 2.90 in the U15 girls’ pole vault after a comfortable clearance at 2.80. That equalled her personal best and it was a first national title for the southern bronze medallist. 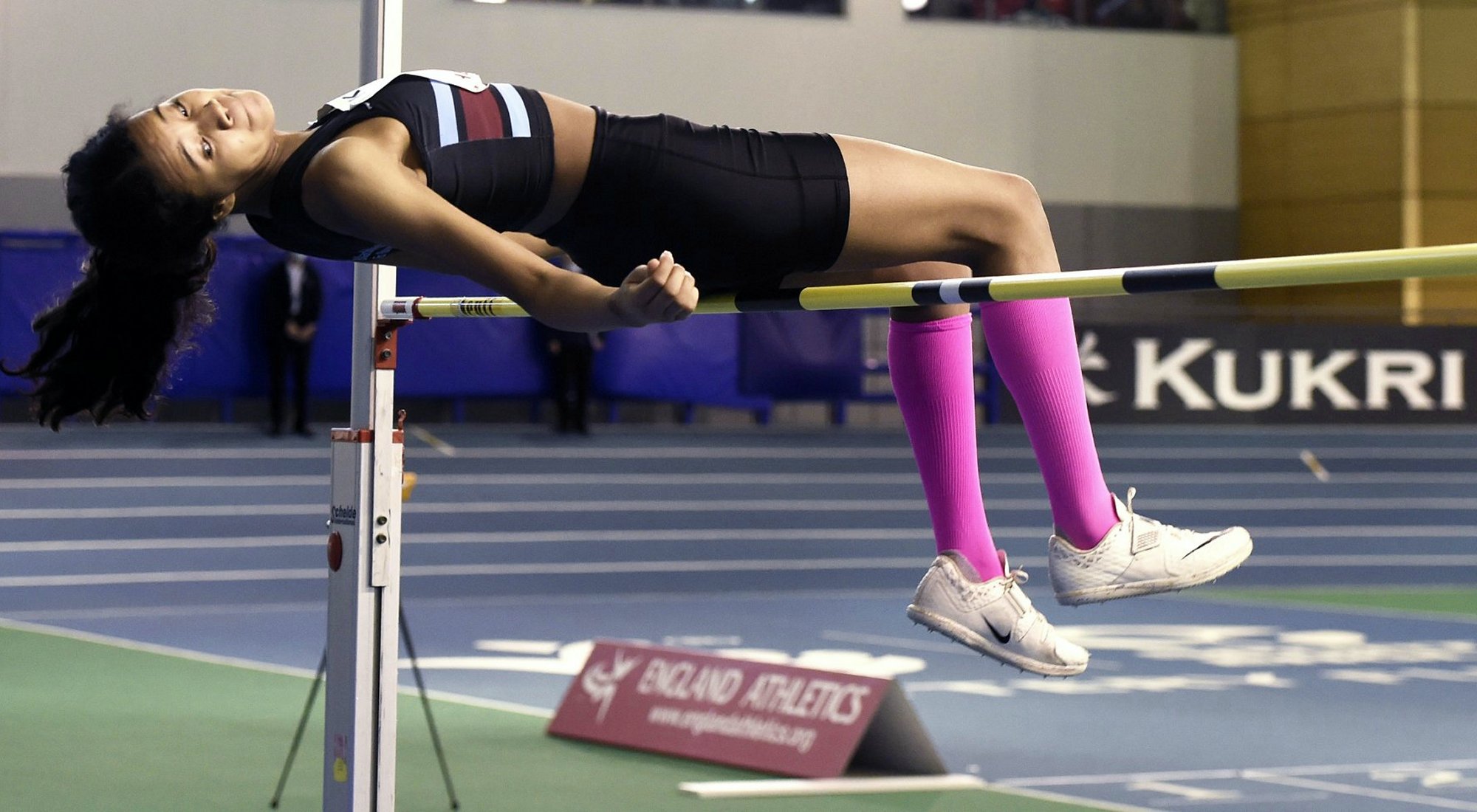 Meanwhile, just a couple of metres away and pretty much at exactly the same moment, Qi-Chi Ukpai (Blackheath and Bromley, John Herbert) also secured her first-ever national gold in the girls’ U15 high jump with a second time clearance 1.64, 3cm clear of her rivals but shy of her PB of 1.66. Andre Onyekwe (Leamington Athletics Academy) won the U15 boys’ high jump with a third time clearance of 1.82 in his first competition of 2022 – a 10cm PB. 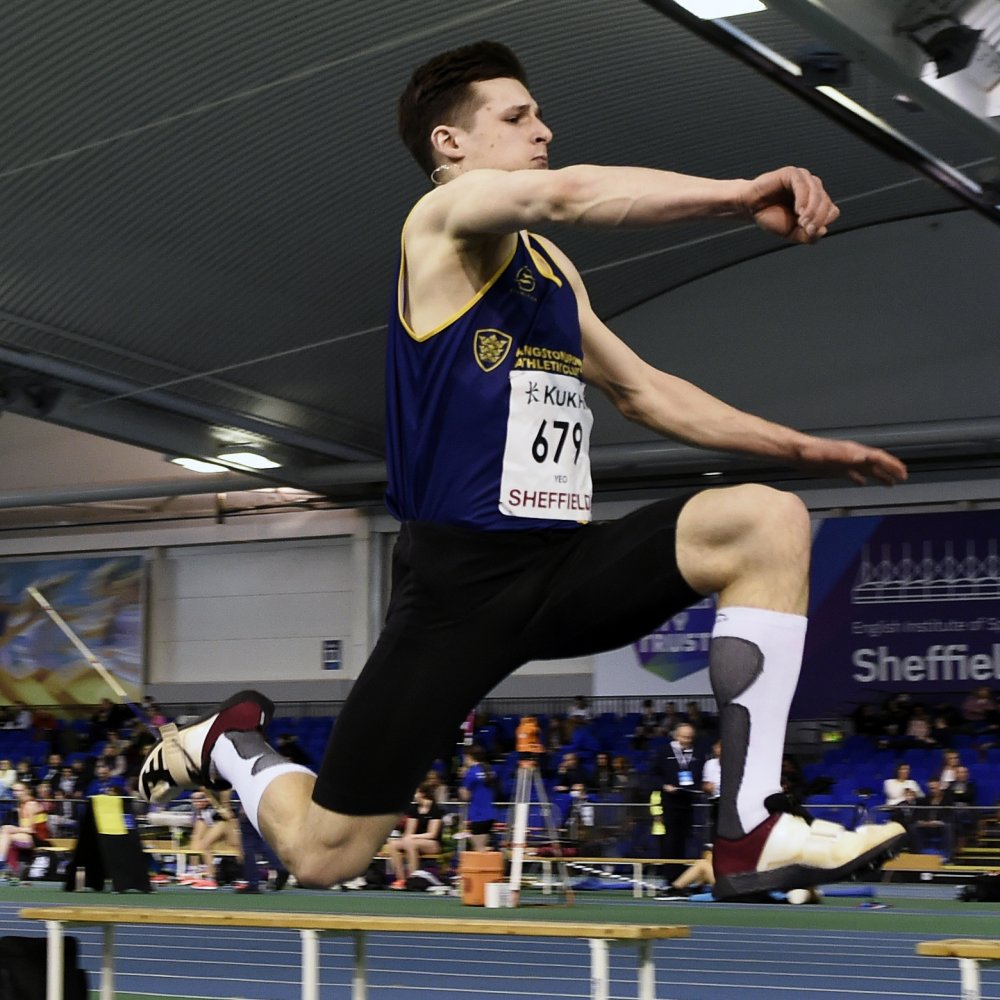 Field events in particular are all about finding that perfect rhythm and after a quiet opening three rounds in the men’s U20 triple jump, Archie Yeo (Kingston upon Hull, Steve Wymark) who is also the top ranked long jumper this season, did exactly that, ending the competition with 14.71, not too far shy of his lifetime best of 14.84. Watch for him on Sunday in the long jump.

In the U17 women’s long jump, Chisom Nwator (Chiltern Harriers, Alan Hewson) won a tight fought contest with 5.71, a nice improvement on her bronze from two years ago in the U15 age group and very encouraging for a multi-eventer. Also multi-tasking was Sadie Parker (Blyth RC, Daniel Njai-Rowney) who won with a 5.45 final jump in the U15 competition. The sprint hurdler had led until the sixth round with 5.29 but then saw that mark equalled by Eve Drury (Leeds City, Daniel Gardiner). She responded superbly to take the title, the second medal for Blyth Running Club in a matter of minutes as Luke Pichler (Blyth RC, Daniel Njai-Rowney) had just picked up silver in the U15 boys’ high jump. 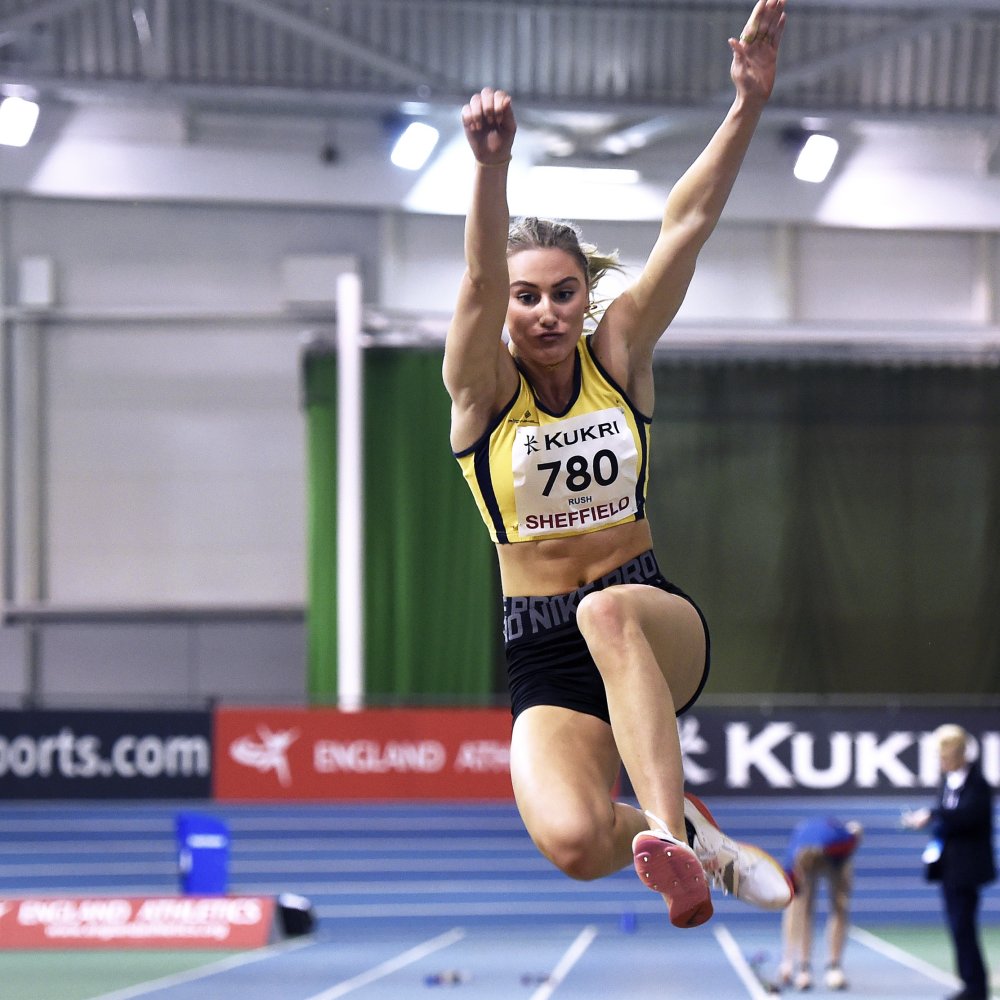 On pre-event form it was Ella Rush (Amber Valley and Erewash, David Feeney) who should be the name to watch in the U20 women’s long jump and so it proved as she looked to have sealed the deal with a 6.00 second round effort. Tell that to Ruby Jerges (Crawley, John Shepherd) however, who produced a monster 6.09 (a 19cm PB) to take the lead only for Ella to instantly respond with a huge 17cm PB herself, a fabulous 6.22. And it was only the third round! Ruby did finish with another 6.09 but it was Ella who took the gold.

To get us in the mood for a Super Sunday a slight programme change saw Emily Newnham (Shaftesbury Barnet) clock 54.76 to win the women’s U20 400 final but wrapping up this fun, drama-filled day were the shot putters who quite literally were given centre stage for the final hour or so. And it was long-time leader Rebecca Wright (Woodford Green and Essex Ladies, Tony Jarrett) who got things going with a big 56cm PB of 12.28 to win the U15 girls’ shot putt. Meghan Porterfield (Victoria Park City of Glasgow, Henry Hunter) ended day one with a 14.79 throw to take the women’s U17 shot title, a championships best performance. Truly, a great way to end what was a superb day one.