Over the three days in the Serbian capital, the medal tally of two didn’t do the team justice. Honours were spread around 31 nations with only six of them bagging more than two podium places. The placings table which allocates points for positions had Britain in a solid sixth.

Marc Scott (Richmond & Zetland) cemented his excellent form this year with his first global medal, winning bronze in the 3000m behind Selemon Barega and Lamecha Girma in first and second, respectively. He ran a superb race tactically, always staying within fighting distance of the Ethiopians, who were running as a team, and coming home to a season’s best of 7:42.02. The European indoor 500m record-holder said afterwards:

“The Ethiopians and Kenyans were just taking it in turns, but I wasn’t getting too worried about that. I knew if I was there with a lap to go, I could come out with a medal because I believe in my finishing speed. I had it in my head that I wanted a medal and it weighed pretty heavily at times. You never know what’s going to happen in these races. I knew if I could get around a lot of bodies going into the last lap it would be very hard for them to come back past me… I’ve always believed this is my level, but I always had minor setbacks going into the major championships. This year I knew I could compete. It gives me great confidence going forwards.”

Jamaine Coleman (Preston) was the other English contender, running 8:12.76 in his heat on his senior international debut for GB. 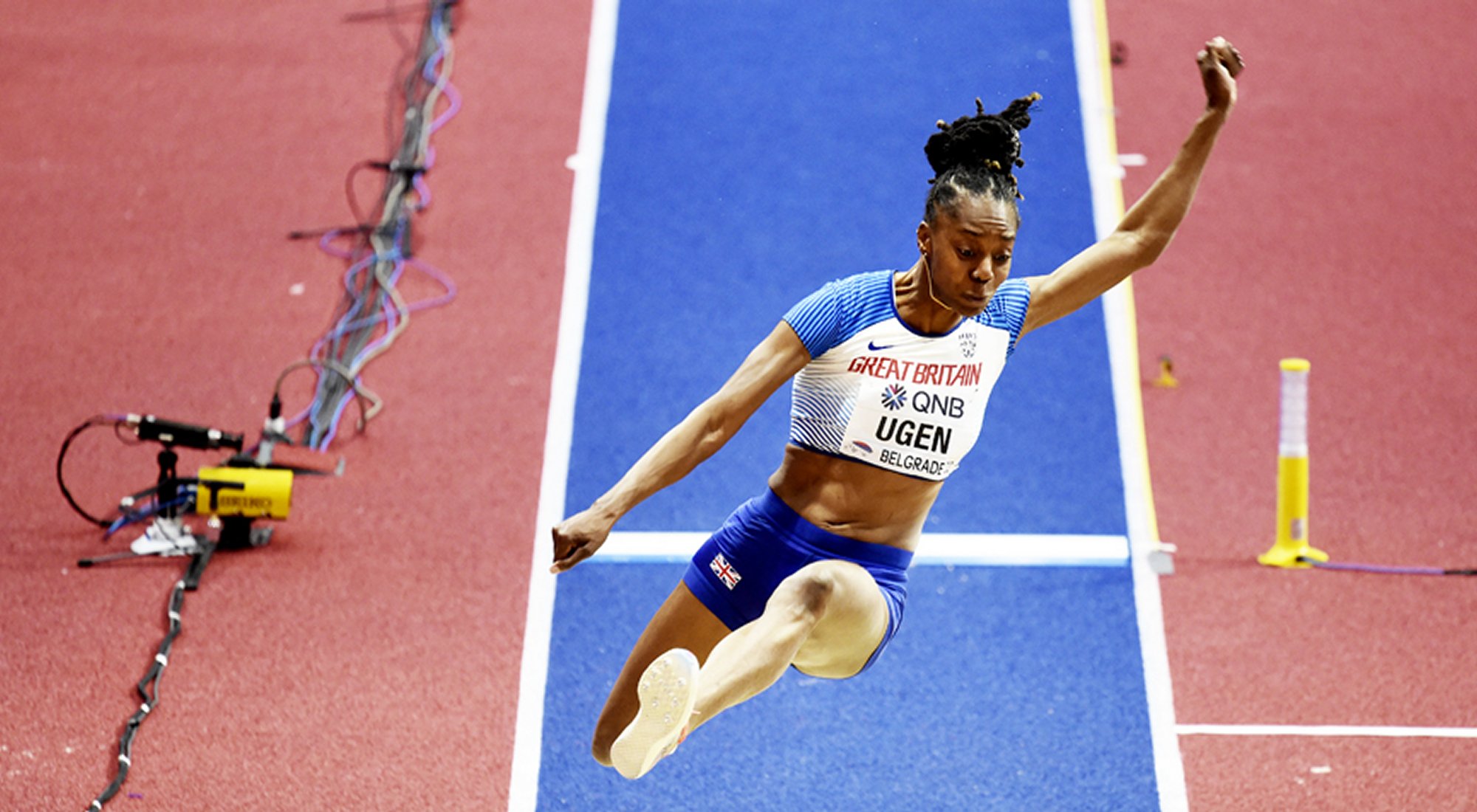 Lorraine Ugen (Thames Valley, Dwight Phillips) overcame an early scare to duplicate her bronze from the 2016 edition of these championships. With fouls in both of the opening two rounds, the British indoor record-holder was in danger of not making the halfway cut. However, not only did her season’s best 6.82m in the third round give her three more attempts but it put her in third. She had one more valid jump, 6.78m, as Serbia’s Ivana Vuleta took gold and Nigeria’s Ese Brume the silver.

“I feel really happy to have got on the podium,” she said. “It’s been a little while as I’ve suffered with injuries and was deciding whether to retire or not, not having sponsorship behind me, but I was like ‘you have to put the work in and do this to get back on the podium’ to prove to myself that I can be back at the elite level again.

“I scared myself at the beginning with those two fouls and I was like ‘please don’t do this, don’t foul three times’ so I was so happy to get that third-round jump in and it was enough to get on the podium.

“I wanted to come out here and get a season’s best but secretly I wanted another national record as my personal best is from here and I knew I liked this track and wanted a cheeky British record, but it’s okay, we’ll save that for the outdoors, it’s coming, hopefully.”

Holly Mills (Andover, Laura Turner-Alleyne) was an agonising seven points short of a medal in the pentathlon, taking fourth with a PB of 4673. She opened up with a PB of 8.15 in the 60m hurdles and further good marks such as a 13.68m shot put gave her a long shot of a medal going into the final event, the 800m. She gave it her all with a PB of 2:09.97 but ultimately it was a mere half a second too slow to overhaul American Kendell Williams from the bronze medal position as Belgium’s Noor Vidts took gold. She said straight afterwards:

“Right now, the feeling is one of disappointment because you go through all that pain of running the 800m and you cross the line and it’s relief that you’ve finished but at the same time you just wish there was that extra half-a-second, so at the moment, yes, I am gutted but tomorrow when I look back and see my points PB and coming fourth in the world it’s not the end of the world.”

World heptathlon champion Katarina Johnson-Thompson (Petros Kyprianou, Liverpool) had made a late decision to accept the invitation to compete, but ultimately found herself short of her best at this stage of the season. She had been sixth after four of the five events but decided not to take her place in the 800m. She said:

“I’m fit and I’m happy, but I knew I couldn’t give it my all for the 800m, so I decided to withdraw from the last event in the pentathlon. This was my first opportunity to compete since Tokyo and I wanted to test myself in a competition again. I’ve learned a lot. I’ve now got a plan in place for the rest of the season, and I’m now really excited to get back out there and defend my titles.”

Adam Thomas (Bracknell) was just a hundredth shy of his personal best with 6.57 in reaching the final of the 60m on his debut at a major championships. The Scottish sprinter was ultimately fifth in 6.60 and afterwards said:

“I don’t think that was the best of me in the final as I didn’t manage to pull together my race fully but it’s a hard thing to do, to piece together three races in a day. And these guys I am racing against have a lot of experience in doing that. Not just from a racing point of view, but a resting point of view – to switch off and switch it back on again, it takes a lot of practice to do that.”

Team-mate Andrew Robertson (Sale) narrowly missed out on one of the two automatic places for the final, clocking 6.64 for third in his semi-final.

David King (Tim O’Neil, City of Plymouth) had the best result of his career as he reached the 60m hurdles final, albeit courtesy of a highly unusual route. In the semi-final contest for fastest non-automatic qualifier places, his time matched that of Japan’s Japan’s Shusei Nomoto from another heat exactly to the thousandth of a second. Officials had to resort to deciding who would take the spot in the final by means of picking one of their names randomly out of a bag. King, whose 7.57 in the semi-final equalled, was the lucky one and he justified his place among the world’s best with a sixth place in 7.60. He said:  “

It’s been a crazy day and a rollercoaster of emotions, but I’m super happy to come out with luck on my side. I would have taken sixth in the world and a PB in the semis every day of the week, this is what I train for.”

Andrew Pozzi’s defence of his title ended at the semi-final stage as the Stratford upon Avon athlete clocked 7.60 in fourth behind eventual winner Grant Holloway’s world record-record-equalling 7.29.

They followed the men’s team, who fought valiantly for a medal but were ultimately sixth after a tightly contested final leg. After the opening leg from Ben Higgins (Stewart Marshall, Sheffield & Dearne), Alex Haydock-Wilson (Benke Blomkvist, WSEH) brought the team up to third with a split of 46.34, the third fastest of all the runners in the final. Then Samuel Reardon (Nigel Stickings, Blackheath and Bromley) produced a great senior GB debut with a 46.94 split to keep them in medal contention. However, Scotland’s Guy Learmonth found himself up against a highly competitive final leg and was run out of the podium places after a gutsy battle to stay in the race.

Sophie McKinna (Great Yarmouth, Mike Winch) continued her excellent form this year by placing eighth, equalling the best position by a British female shot putter at global level since 1995. Her 18.62m was just 20cm short of her recent outright PB and confirmed her status as one of the best in the world. Amelia Strickler (Thames Valley, Zane Duquemin) was 13th with 16.86m. Scott Lincoln (Paul Wilson, City of York) was hoping for better than his 16th in the shot, recording a best of 19.65m.

Daryll Neita (Cambridge H, Marco Airale) and Cheyanne Evans-Gray (Croydon, Nat Senior) both reached the semi-finals of the 60m. Neita was fifth in her semi in 7.15, while Evans-Gray was sixth, taking three hundredths from her PB with 7.19.

Similarly in the women’s 400m, both British representatives made the second stage of the competition. Knight produced her best time for two years when placing fourth in her semi-final. Pipi clocked 52.53 in her heat and was eventually sixth in her semi.

High jumper Emily Borthwick (Wigan & District, Fuzz Caan) has been in the best shape of her life this year but was unable to rediscover that form as she went out with a best height of 1.84m for 10th.

With two of England’s strongest gold medal contenders, 800m runners Keely Hodgkinson and Elliot Giles unfortunately dropping out of the team with injury concerns, Charlie Da’Vall Grice (Brighton Phoenix) flew the flag for England over four laps. Da’Vall Grice, stepping down from his preferred 1500m, went out in the heats with a time of 1:50.17. European indoor champion Amy-Eloise Markovc (Chris Fox, Wakefield) was 15th in a high-quality 3000m in 8:53.57.