“Dave Bedford just sat in my chair,” a bemused competitor at the Night of the 10,000m PB’s said – happy to have just recorded a personal best – but more than ecstatic that Bedford, the former world record holder, chose to rest his legs using his foldaway chair.

But it was that kind of day at Parliament Hill track in North London, where running or watching fast times also involved rubbing shoulders with big names as nearly seven hours of action-packed entertainment – not to mention the beer tents occupying the outer lanes – kept the 5,000 spectators enthralled.

The event was started back in 2013 to promote faster 10,000 metre races but has become much more than that with plenty thinking it’s now the direction athletics should take. Indeed, Bedford himself is of that opinion.

“This could be the future of the sport,” he said. “What’s been done is incredible, but you could do it with every event. Imagine watching some of the best 100m or 200m runners up close, or pole vaulters clearing the height of a double-decker bus from a few metres away?”

And just like Friday Night at the Palace, an evening of world class athletics at Crystal Palace in front of capacity crowds in the 1970, 80s and 90s, it’s an emotionally charged evening that promotes everything that is right about athletics. The atmosphere is electric. There were world and European Championships places to be had in the final two races, but earlier in the day it’s all about fast-paced head-to-head competition, world-class performances (where else is the so-called B-race won in a national age-group record) and an endless procession of season’s bests.

Plus, anyone lucky enough to cross the line first, won their bodyweight in beer – that’s close to fifty cans.

“I love it,” says Nichola Gibson, a 400-metre runner no less but who is a regular at this event, which is free to watch.

“It’s just like Crystal Palace used to be where I remember lining up for a burger behind 100 metre superstar Maurice Greene,”

she laughs nodding her head in the direction of Commonwealth Games gold medallist and now England Team Manager Kelly Sotherton who is waiting patiently for a pizza.

What other sport is so relaxed; star spotting is almost too easy. Choose your own rules. Do you want to spot runners with titles? Well, there’s Eamonn Martin, the last Englishman to win the London Marathon (and a former British record holder at 10,000m), or maybe Olympic medals would make it more difficult?

No, hang on there’s Wendy Sly, silver medallist over 3000m in LA in 1984. Former National Cross-Country champions? Spencer Duval is on hand for that category. Coaches who were Olympians? Matt Yates fits that bill nicely. Tokyo Olympian Chris Thompson, on pace-making duties for this one, posed for selfies loving the fact he could chat with spectators liking the event to the hugely popular Darts World Champs that attracts so many to the nearby Alexander Palace every December. 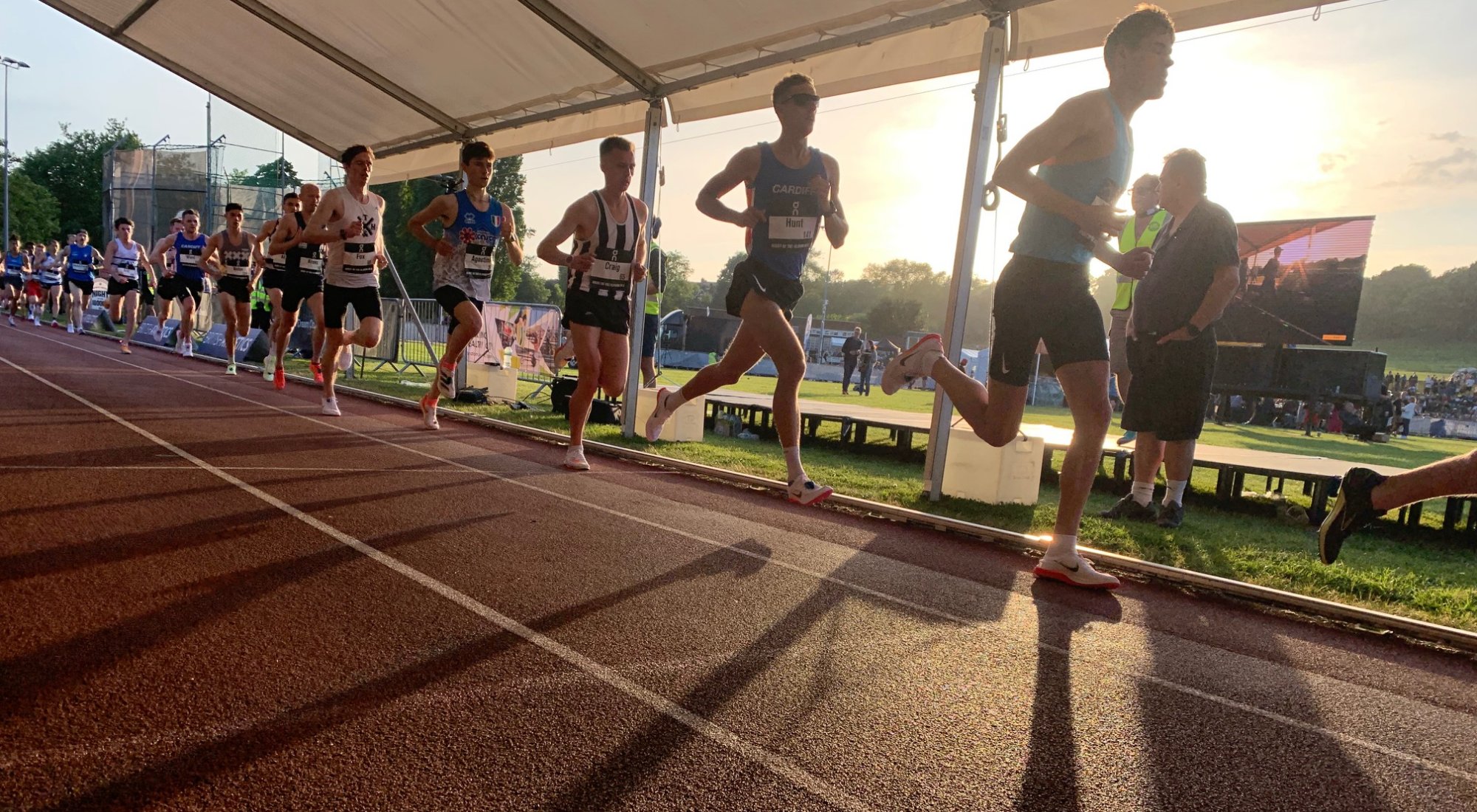 But it’s the guy singing and dancing in the middle of the infield who’s the person everyone really wants to thank and shake his hand. Ben Pochee and his team created this event in 2013 as a way of promoting faster running over 10,000m.

“Within two or three years it became an event that everyone knew was going to be in the calendar,” he says.

But what really makes this event so exciting is the way athletes and spectators interact. The infield isn’t out of bounds; indeed, there’s a gantry to encourage hundreds to cross and mill about shouting words of encouragement and shout splits – against the rules anywhere else. And then there’s the beer tents – one occupying the outer lanes of the back straight and one in the usually clear final fifty metres before the finish line. No drifting out to lane six here as you drive for the line, unless of course you want a beer.

As for the racing, well that was superb with Blackburn’s Jess Judd winning the women’s race in 31:22.24, inside the World Champs qualifying mark of 31:25.00. She had to work hard though as Wakefield’s European indoor 3000m champion Amy-Eloise Markovc closed fast to agonisingly just miss that mark with 31:25.57.

“I’m just over the moon to have won. I got quite emotional coming down the last 100m. I never really win, I’m always there or there abouts, so it was a nice feeling to win a race,” Judd said afterwards. “It’s what the sport needs. I’ve seen people on the way round that I started at the club with when I was 12, 13 and thought ‘this is unbelievable’. It’s the grassroots and we need to protect it,” she added. 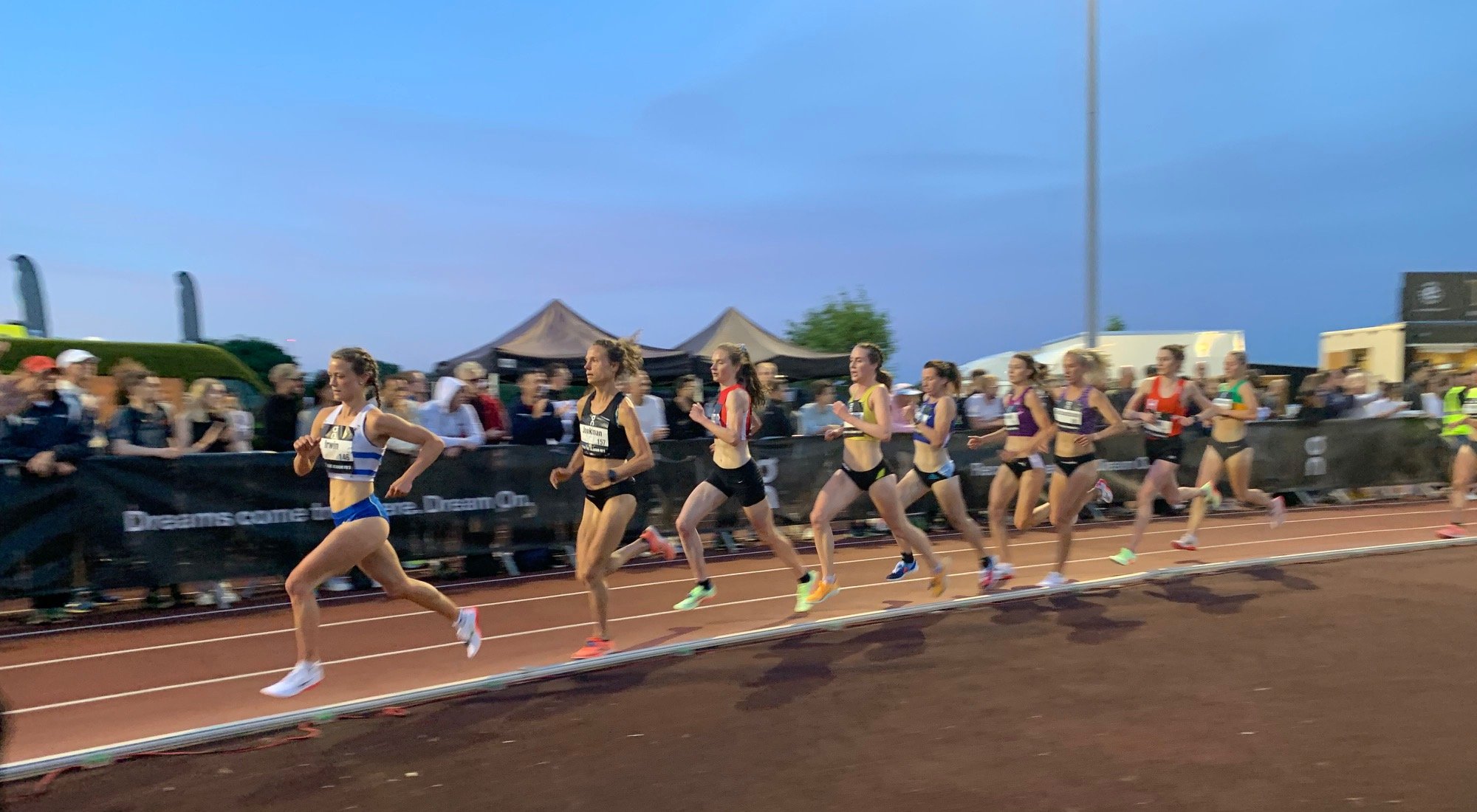 Italy’s Yeman Crippa, the European bronze medallist won the men’s race by more than 15 seconds in 27:16.18, but behind him the battle for top Englishman was superb with Lincoln Wellington’s Sam Atkin, prevailing as he finished second in 27:31.98.

And while the 10,000 metres was very much top of the bill, there were also two classic mile races – the Emsley Carr Mile and the Millicent Fawcett Mile. Matt Stonier (Invicta East Kent) and Australia’s Georgia Griffith won in 3:54.89 and 4:27.81.