Bedford puts on its Sunday best

Like the smoothest of relay baton changes, day two of the England Athletics U23 and U20 Championships and European Trials picked up precisely where the opening session ended on Saturday with a seemingly endless string of international standard performances. It not only confirmed the current strength in depth we’re enjoying as a sport, but also hinted at what might be on the horizon in Sweden later this summer at the Euros when it comes to medals and titles. Understandably with GB vests as the prize in both Gävle for the U23s and Borås for the U20s, expectations were high, tough qualifying standards being picked off at regular intervals – all of which was covered by the BBC live online; great times indeed for age group athletics!

The men’s U20 800m was definitely all about that current strength in depth. No one questioned that Max Burgin (Halifax, Ian Burgin) would surge to the front given his recent form; what the crowd wasn’t ready for was the stunning time he clocked. He powered through 400 in 52.02 and then stretched away in the final 150 for an simply amazing 1:45.36, the British record for U20s and far quicker than the 1:47.29 CPB. It was also the fastest by a Brit this year, but almost incredibly he didn’t have it all his own way as behind him Ben Pattison (Basingstoke & Mid Hants, Dave Ragan) chased him all the way to the line and was rewarded with 1:46.31. In any other year Spencer Thomas’s (Brighton Phoenix, Jon Bigg) 1:47.31 in the men’s U23 800m would be drawing all the plaudits as it too was a CBP but such was Burgin’s run five minutes earlier, his brave front run (53.0 at the bell) almost went unnoticed! 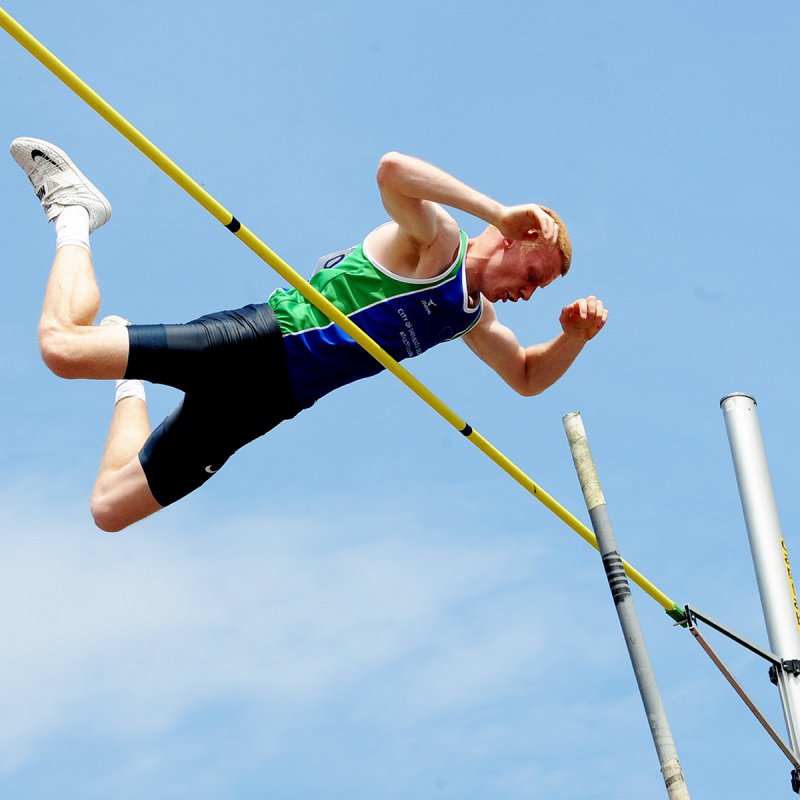 Similarly the men’s U23 pole vault demonstrated great depth as three competitors vaulted almost without fault ever closer to the CBP of 5.41m. Given their clinical clearances early on, that decade-old mark looked doomed, and so it proved. In fact, in the end it was all about a jump-off between first time clearance athletes Adam Hague (City of Sheffield and Dearne, Trevor Fox) and Joel Leon Benitez (Notts, Robert Phillips) such was the closeness of this event. And even then it would take yet another CBP to make sure of gold. Both cleared 5.45 before failing at 5.55m. The bar went back down to 5.45 which both popped over again before Hague then finally cleared 5.55m for a great win. Spare a thought for Charlie Myers (Middlesbrough, Chris Boundy) who had also cleared a what would have been a record 5.45m but didn’t feature in the jump off as that had been at the second time of asking. Phew.

If Callum Wilkinson (Enfield and Haringey, Andi Drake), the new British record holder for 10km walk on the road was overawed by the fact former record holder Tom Bosworth was making his commentary debut in the press box, it didn’t show as he shattered the CBP, reducing his PB to 40:29.26. Clocking what Bosworth described as an incredible second 5k, after a 20:50 opening 12.5 laps, he won by more than 400 metres.

The men’s U23 hammer was also all about record breaking as Jake Norris (Windsor, Slough, Eton and Hounslow, Paul Dickenson) took no time to make his mark on the field, his opening effort touching down at 70.60m. He is the British junior record holder with 73.24m so it was no surprise that first throw survived as the CBP for no more than one throw as he followed that big opener with 70.64m. Incredibly, this was his sixth age-group national victory: three as an U20, two as an U17. More to follow? Don’t bet against it!

Controlled, strong and full of running were just some of the words used to describe Amber Anning (Brighton and Hove, Lloyd Cowan) as she powered to the gold in the women’s U20 400m, smashing her PB and the CBP on the way with 52.54m, good for fifth equal on the all-time list. Truly one of the best runs ever seen over one lap and just 0.11 behind Olympic champion Christine Ohurougu’s U23 mark. It was that fast.

Finally, Jacob Fincham-Dukes (Leeds, Matt Barton) equalled the CBP in the men’s U23 long jump with 7.75m, a fabulous performance that would be a headline act on any other afternoon in Bedford, buy barely caused more than a murmur of approval. But it was that kind of day!

Getting it right on the day

Of course this is an event where winning a national title is the name of the game and that might mean using slightly different tactics as the middle distance athletes demonstrated. Both the men’s and women’s U20 1500m was all about one thing: the final lap. Josh Lay (Rugby and Northampton, Tony Love) looked in complete control all race long and nobody, not even Tom Keen (Cambridge and Coleridge, Mark Vile) could live with the incredible closing speed Lay demonstrated. He ripped through the final 800m in around 1:55 but that was only half of it; his 52sec final 400m was truly magnificent as he eased down in the final two strides for a 3:53.86 win. The very next race, the women’s final was a carbon copy in that the field dawdled through the opening couple of laps (2:31.1) before Erin Wallace (Giffnock North, Andy Young) hit the front and flew around a controlled final lap of 63sec for a 4:27.01 win, narrowly avoiding three fallers just behind her at the bell.

Fast last laps continued to be the theme in the 800m with the closest race coming in the women’s U23 race. Jemma Reekie (Kilbarchan, Andy Young) kicked hard with 200m to go, building up a huge lead going into the final 100m. However, Ellie Baker (Shaftesbury Barnet, Jon Bigg) had other ideas and hauled her back in the final few strides, just being leaned on the line as Reekie hung on for 2:06.41

Just as it had on Saturday, conditions refused to play ball and was once again a headwind for the sprinters, so often rewarded with super fast times at this venue. So imagine what men’s U23 200 winner Shemar Boldizsar (Harlow, Vincent Lawrence) is thinking. He clocked 20.65, a Euro qualifier and big PB into a -0.6m/s wind. A friendlier breeze would surely have seen the 16-year-old CBP of 20.58 fall.

Temitope Ojora (Windsor, Slough, Eton and Hounslow, Danny Sawyers) completed a nice double, adding the women’s U20 high jump crown to the triple jump title she won on Saturday. She easily cleared 1.80m to equal her PB before three close attempts at 1.83m.

For Alastair Chalmers (Guernsey, James Hillier), it was a slightly different story in the men’s U20 400m hurdles. He did add another title to his collection, but incredibly this was the third time he’s won the gold in the same age group. Defending once is great, twice sensational, three has you searching the record books for something similar. Rare indeed. His time of 50.58 was just shy of his PB of 50.07 (a Euro qualifier), but he clouted the final hurdle just losing form slightly in the final few strides. Sub 50 is close.

Three is good, but how about double that? Naomi Ogbeta’s (Trafford, Tom Cullen) win in the women’s U23 triple jump was the sixth time in a row she’s won a national title, her distance this time being 13.67m, a 9cm improvement on last year’s winning effort.

Divine Oladipo (Blackheath and Bromley, John Hillier) added the women’s U23 shot to her discus crown she won on the Saturday, not to mention to her 2018 title, with 15.92. Keeping her winning streak going, Samantha Callaway (Southampton, Debbie Callaway) added the women’s U20 discus title to the U17 gold she won last year, with a 47.29m throw. Ditto for Holly Mills (Andover, Laura Turner-Alleyne) who was also in her best-ever shape, touching down at a legal 6.40m (+1.4m/s) in the women’s U20 long jump for her fourth age-group outdoor title. Kristal Awuah’s (HHH, Matthew Thomas) added the women’s U23 200m to her collection with 23.26 into a -1.2m/s wind, but nonetheless a PB, while Alicia Barrett (Trafford, Toni Mininchello) has now won the U15, U17, U20 and U23 100m hurdles title thanks to her solid 13.60 win.

Right on the money

Producing a lifetime best at a national championships is what the winter and all its hours of arduous training is all about. But few were prepared for the monster improvement former footballer Daniel Falode (Cambridge Harriers, Guy Spencer) displayed in the men’s U20 triple jump as he recorded 15.43m to take home the title. Behind him, the next two medallists were also rewarded with lifetime bests.

On the track, Marcey Winter (Windsor, Slough, Eton and Hounslow, Neil Dodson) smashed her PB in the women’s U20 400m hurdles, taking gold with 58.36, fully 1.6sec quicker than she’s ever run before, while Chelsea Walker (York, Nick Fortenberry) was also in PB shape, talking the U23 race in 58.26. One lap sprinting was also all about best-ever times as Ethan Brown (Blackheath and Bromley, Lloyd Cowan) won the men’s U20 400m in 46.45.