A British record by Holly Bradshaw (Blackburn; Scott Simpson) was the standout performance by English athletes on day two of the Müller British Athletics Championships in Manchester. With Olympic selection assured for the top two in each event if they had the relevant standard, 10 English competitors did enough to guarantee their places at the Tokyo 2020 Games.

Pole vaulter Bradshaw will clearly be going as a strong contender for a medal after her 4.90m clearance today. She had a first-time clearance at 4.83m to add a centimetre to her national record and she did likewise when the bar went up further to a height bettered by only two athletes in the world this year. The athlete who was fifth at the 2016 Olympics said afterwards:

“I’m in the best shape of my life and I’m glad it’s just shining through.” She said being relaxed was key to her success at the moment. “It’s a great place to be in. It’s really counter-intuitive in the pole vault; when you try harder, you do worse, so it’s really hard to be relaxed. It’s just a nice environment – a small stadium with the crowd – I was just at ease and relaxed and could just go out there and do my thing and it was great.”

Another of Britain’s best hopes for gold at the Olympics, Dina Asher-Smith, was in scintillating form as she won the 100m with 10.97. The clock for the world 200m champion had stopped on 10.71, which would have represented a British record. However, her celebrations turned to a slight air of disappointment as it emerged this was a technical fault. The times that were confirmed showed second place went to Asha Philip (Newham & Essex Beagles; Steve Fudge) in 11.16 and third to Daryll Neita (Cambridge Harriers; Rana Reider) in 11.21. Both already had the Olympic standard but it is Neita who must wait until Monday to see if she will be given the third discretionary spot by the selectors.

On the men’s side, CJ Ujah (Enfield & Haringey; Ryan Freckleton) collected his fourth national title with a time of 10.05 in the 100m, which also gained him an automatic Tokyo place. However, the race was marred by a false-start disqualification for Zharnel Hughes (Shaftesbury Barnet; Glen Mills), who had been quickest in the semi-finals with 10.06. The victory was a comfortable one for Ujah, who has clocked 10.03 this season, as Eugene Amo-Dadzie (Woodford Green with Essex Ladies; Steve Fudge) was second with 10.27. Jona Efoloko (Sale; Clarence Callender) was third with a PB of 10.30.

Tade Ojora (Windsor Slough Eton & Hounslow; Caryl Smith-Gilbert) produced the biggest shock of the day to beat Andy Pozzi in the 110m hurdles in 13.39 – a PB by 0.15 seconds. David King (City of Plymouth) was second in 13.51. World indoor 60m hurdles champion Pozzi (Stratford; Santiago Antunez), who is the only athlete with the qualifier and has been consistently up with the world’s best this season, hit a hurdle badly and crossed the line third in 13.54. 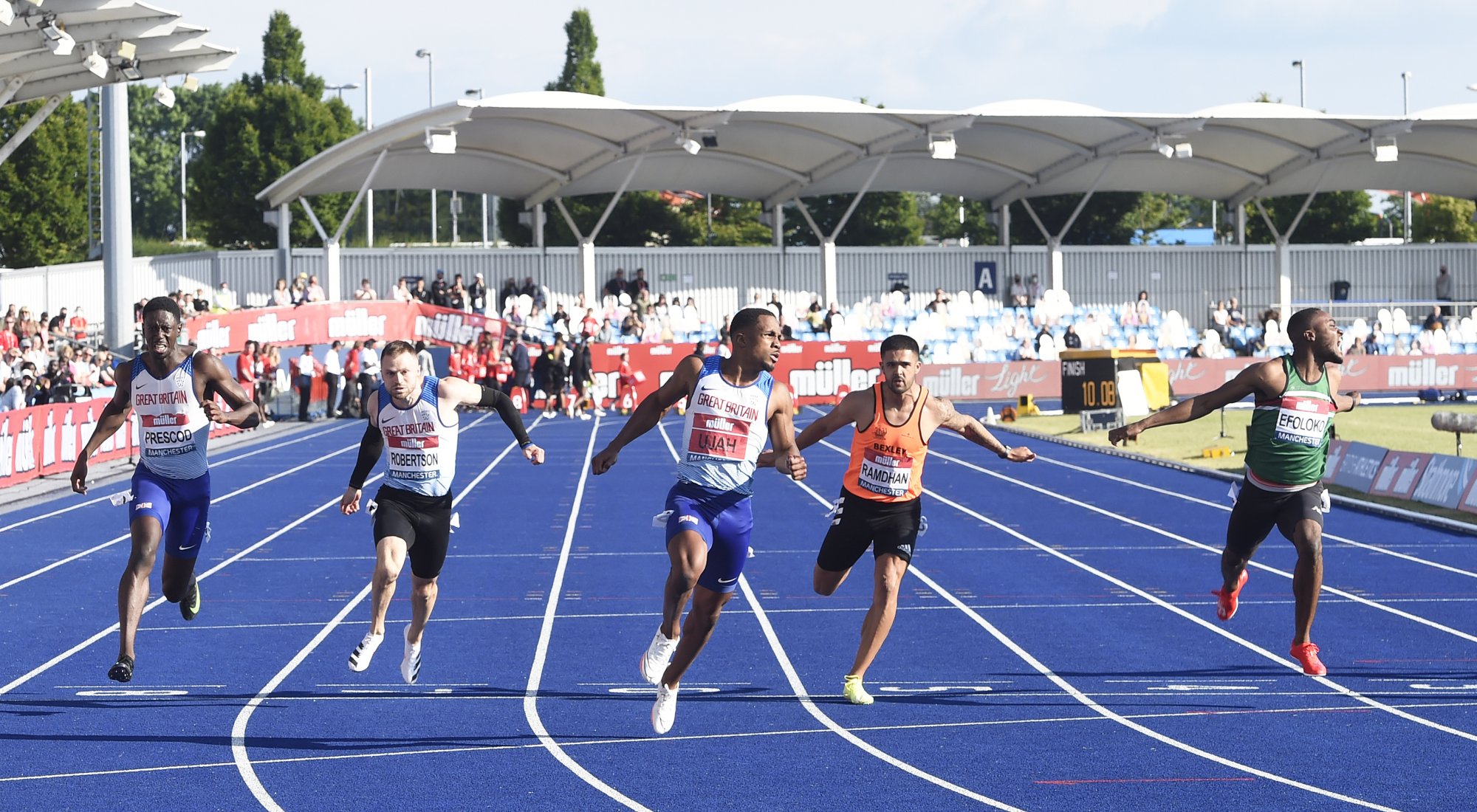 Eight years after setting his UK record and placing 12th at the London Olympics, Lawrence Okoye has ensured he will back in a GB vest at a major championships. The John Hillier-coached Croydon Harrier, who has returned to the sport after several years out in American football, needed only one valid discus throw to take gold, his 61.71m in the first round leaving him ahead of Scotland’s Nick Percy, with Greg Thompson (Shaftesbury Barnet; Neville Thompson) third with 58.31m. Scott Lincoln (City of York; Paul Wilson), who has been in PB shape in the shot this year, is another on his way to Japan after his win in the shot put with 20.22m. Hammer thrower Tara Simpson-Sullivan (Wigal & District; Robert Halliwell) was the first trials winner of the weekend. In a thrilling finish, the US-based athlete needed a final-round throw of 67.38m to steal victory from Jessica Mayho (Birchfield; John Pearson), who was just 30cm down on that. Meanwhile, javelin thrower Daniel Bainbridge (Shaftesbury Barnet; Michael McNeill) moved from fifth to first with his last effort. Joe Harris (Manx) had led with 72.65m but Bainbridge went a centimetre further.

Jodie Williams (Herts Phoenix; Ryan Freckleton) was just a hundredth outside her PB with 51.02 as the 400m runner bagged herself a place at the Olympics for the second time. The former world junior 100m champion was followed by Scotland’s Nicole Yeargin as Ama Pipi (Enfield & Haringey; Linford Christie) was third with 51.33. Niclas Baker (Crawley; Piotr Spas) stepped up from silver in these championships last year with a great improvement to 46.05 for the win in the 400m. With a PB by more than three tenths, he finished ahead of Cameron Chalmers (Guernsey; Matt Elias) and Michael Ohioze (Shaftesbury Barnet; Dan Tomlin), the other two medallists.

In the women’s 3000m steeplechase, Aimee Pratt (Sale; Vicente Modahl) and Liz Bird (Shaftesbury Barnet) were the only two athletes with the standard and they effectively ran their own race at the front. At the end, though, it was Bird who came past long-time leader Pratt, bursting away off the final water barrier to clock 9:35.36. Pratt was second with 9:39.72 as both look forward to the trip to Japan.

Revee Walcott-Nolan (Luton), a former England under-23 champion at 800m, won her first British title, crossing the line in 4:08.41 in the 1500m. Her late burst held off Scotand’s Erin Wallace by just 0.11 seconds. Katie Snowden (Herne Hill; Daniel Stepney), who was third in 4:08.62, will be waiting on the selectors’ decision as she has the qualifying standard.

Patrick Dever (Preston; Andy Bibby) overcame Scotland’s Andy Butchart in the home straight of the final lap to win the 5000m in 13:37.30.

In a tremendous battle in the men’s 1500m, in which five athletes had the qualifying standard, Archie Davis (Brighton Phoenix; Joel Kidger) ended up as top English athlete in fourth with 3:42.86. Scotland’s Josh Kerr and Jake Wightman booked their berth on the team with gold and silver respectively but, in a tactical race, Davis belied his 13th position on the UK rankings this year.

Tim Duckworth (Liverpool; Toby Stevenson) won the decathlon with 7447 despite an injury scare in the 400m yesterday which led him to finishing a couple of seconds down on what would have been expected. Katie Stainton (Birchfield; David Feeney) heads the overnight standings in the heptathlon with 3409.