In this episode, self-coached 400m runner James Williams talks about combining athletics with being a maths teacher and a brilliant couple of years that have seen him win his first British title and break through on the international stage. Also in this episode, our CEO Chris Jones has been to Mansfield Harriers, who recently returned home to a revamped Berry Hill Park track after a nine-year absence. 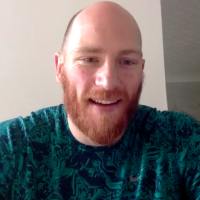 The European indoor relay medallist and Liverpool Harrier says he has “surpassed expectations” after only taking up the full-lap distance in his late twenties, having previously done the shorter sprints.

“Combining teaching with athletics is hard because both things are very demanding. Teaching is so emotionally demanding, and timewise as well, and athletics the same. But, both of them are very structured and regimented. Sometimes things come up like parents’ evening or marking or planning, so I do need to be flexible.” – 400m runner James Williams is also a maths teacher.

“Things were totally rundown, and now it’s functioning as part of the facility for the community and the athletes in Mansfield.

You’ve just got a really great group of volunteers that have just got that determination to plough through the difficult times and support each other.”

Listen to the full podcast

You can also catch up on previous episodes via the links above.
Note (Apple Podcasts on the iphone app only)