The England Athletics Board has appointed Gary Shaughnessy as new chair, with effect from today [1 September 2021].

Following the conclusion of an open, extensive and consultative recruitment process, he was the unanimous recommendation of the England Athletics’ Nominations Committee and succeeds Myra Nimmo following her decision not to apply again for the role after her first term was extended during the pandemic.

The Nominations Committee were in full agreement that Gary has excellent governance expertise, as well as proven success in marketing and financial services, in addition to possessing extensive experience in the charitable and commercial sectors.

An active member of Tadley Runners and registered athlete with England Athletics, Gary’s professional career saw him work for the Automobile Association and the Bank of Scotland before joining AXA as UK director of marketing and brand, including sponsorship of The FA Cup. He then spent nine years with M&G Investments & Prudential Group before joining Fidelity International with responsibility for retail and defined contribution pension businesses in the UK. In 2012, he joined Zurich, ultimately being promoted to the Group Executive Committee as CEO for the Europe, Middle East and Africa region, overseeing 20,000 people in 22 countries, and bank partnerships globally. Gary has also held senior industry roles including chairing the ABI’s protection committee and being a member of an EU expert group making recommendations on digital transformation in 2018.

He was diagnosed with Parkinson’s in 2016. In 2019, when he stepped back from full time commercial life, Gary took on the role of chair at Parkinson’s UK, having already been a trustee of the charity.  Alongside this he continues to act as a senior adviser to the Zurich Group and has been chair of the Z Zurich Foundation, a charitable trust that works globally, since 2017. Alongside climate resilience and disaster relief programmes, including a major vaccination campaign with UNICEF, the Foundation also supports several ground-breaking youth wellbeing programmes centring on sport including major campaigns in Ireland and Australia. 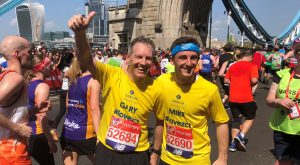 Gary has completed 25 marathons and has a strong background in community sport. He is a vice president of Whitchurch Cricket Club and has enjoyed over a quarter of a century with Whitchurch United Football Club, as a player, chair, youth team manager and now president.

He said: “I am delighted to be taking on the role of chair at England Athletics and am really looking forward to working alongside the Board, staff, our partners and the wider athletics and running community in continuing to grow and develop our wonderful sport. With the recent launch of the new England Athletics strategy, the role the organisation will play in the 2022 Commonwealth Games, and the resilience the sport has demonstrated in recent challenging times means there is much to be positive about and I’m excited about the task ahead.”